By now, most of you in the Klang Valley would have experienced the bliss of turning on a tap and having water come out of it, after some two+ days of getting a panic attack every time you feel the need to poop. But for a lot of people in Selangor, water cuts aren’t really something new, as we’ve written about in a previous article. We’ve had plenty of minor-but-still-a-pain water cuts in the previous years, so most would already know to get a pail or buy some mineral water when water cuts got announced. All in all, it would seem that most of us got through this one unfazed, but would it have been the same had the water problem continued, say… for a few months?

If you’ve got dry mouth just thinking about it, wait until we tell you about previous horrible water cuts that happened, starting with…

We know that water cuts and rationing can be a pain, especially if you live in a high rise building and have to carry water up several times a day. But can you imagine doing it for a whole year? Wah lao better move somewhere else already. It sounds weird, but based on passing mentions in several reports, that’s what happened to Malacca in 1991. Back then, there was a drought going on, and Malacca’s main source of water was the Durian Tunggal Dam. For a while, everything was fine, but it was said that somebody goofed up somewhere and made a mistake in checking the water level in the dam. So sometime in Jan 1991, the dam dried up, but it was too late to do anything about it. This caused a drastic state-wide water rationing for the next three months, affecting the livelihood of over 600,000 people.

The sudden, prolonged rationing was said to have caused adverse social, political and economic implications, and it severely affected the confidence of the people and potential investors in the state. Drastic measures had to be taken, so in March the Malacca Water Board spent RM34.49 million on an emergency program to build a bunded storage and water transfer scheme in preparation for the next wet season, so that such a thing won’t happen again. The transfer scheme will redirect excess water from Sungai Melaka to the reinforced Durian Tunggal dam and store it there during the wet season, and the construction was completed near the end of October 1991, just in time for the wet season. However, it wasn’t until Feb 1992 that the Durian Tunggal dam’s water level reached its normal level again, marking the end of the water crisis after one year. Since then, Malacca was said to have continued its efforts in reinforcing its water supply system, like establishing more reservoirs, connecting all of them using channels and rivers, and entering into water supply agreements with nearby states.

Despite its seeming length, Malacca’s water crisis did not get the title of the worst crisis in Malaysia’s history. That actually went to…

So sometime in 1998, another water crisis happened, said to be caused by a dry spell due to El Nino and low water levels in reservoirs. It was said to have affected parts of Kedah, Perlis and Penang, Negeri Sembilan, Malacca, KL and Selangor, although most reports we found spoke of the last two only. Should be expanded to the whole of Malaysia, for tourists. Img from Pinterest.

Anyways, in Selangor and KL,  it was said that about 1.8 million people have been affected by a water rationing exercise that lasted for six months, while other reports said that the rationing lasted for 150 days. Some reports say that for Klang Valley, the rationing started in April and ended in September that year, although according to a copied report from the New York Times, some reported having problems with water supply since February.

Regardless of all that, those who lived in Klang Valley at that time recalled the water rationing as not having water in the taps regularly: some would get water on alternate days, while others went for weeks without tap water, depending on rainwater instead. A resident recalled only having water for 10 days between February and August. Yikes. As for what the authorities did about this, well, the KL City Hall, for one, brought out their static tanks and placed it at their public housing flats and longhouses, while in Selangor, they did several things, like setting up more than 100 hand pumps in residential areas with water problems as well as installing two water treatment units that drew water from the lake at Mines Wonderland as a back up for the Commonwealth Games that year. Today, if you go to Mines, you can still sample the water from inside the mall. Img from megatrend007’s YouTube.

They also undertook a project to pump underground water into Sungai Langat, a major water source, to boost its level. At the end of the crisis, the Selangor MB at that time divulged that they spent some RM50 million to handle the crisis, which included hiring water-tank lorries (RM24.9 mil), digging tube wells (RM13.5 mil), purchasing ultrasound units to detect ground water (RM8 mil) and staff overtime (RM3.4 mil).

NAH, BACA:
Our 8 Fav IKEAHacks available in Malaysia (with prices in RM too!)

While this may seem bad, some would say that it’s relatively better than… 2014 was a bad year for water. Chart pulled from NWA’s magazine.

News reports mentioned that back in 2014, Selangor and Negeri Sembilan underwent a water crisis that lasted six months from February to August, but it’s hard to point out the exact time range. According to a publication by the Malaysian Water Association, the rationing for this crisis was imposed from end of February 2014 to the start of May, but according to a conference paper, the actual problem started from December 2013.

Regardless, we knew that a water crisis happened so bad that some reports told of residents protesting the water cut, and people have gotten angry about it. It seems that the problem started in January that year when two water treatment plants (Batu 11 Cheras and Bukit Tampoi) had to be closed due to a high ammonia content in the water. This affected residents of 36 areas in Hulu Langat and Kuala Langat, causing people in Balakong to go without water for 19 days consecutively. A virtual queue in a residential area in Balakong. Img from the Star.

As if that wasn’t bad enough, the dry season caused the water level in Selangor River and several dams to drop, so at the end of February, the government reduced the water intake from the river, consequently reducing the output of five water treatment plants, making water rationing necessary. This affected 1.3 million households (not including businesses and industries), causing low water pressure and trickling taps. Still things didn’t improve, so on Mar 2, the water intake from the river was further reduced, and the area subject to water rationing widened. Some areas would have no water for two days, followed by two days with water.

The area of rationing kept growing, at some point including Putrajaya and parts of KL. This continued until May 1, when the rationing was finally lifted due to water levels in major dams rising again. Overall, at the height of the crisis, a total of 6.7 million consumers were affected, prompting some to say that this crisis was even more severe compared to the one in 1998. And while it may seem that the worst is over, we should remember that…

For a country that rains so much, we sure have a lot of water problems 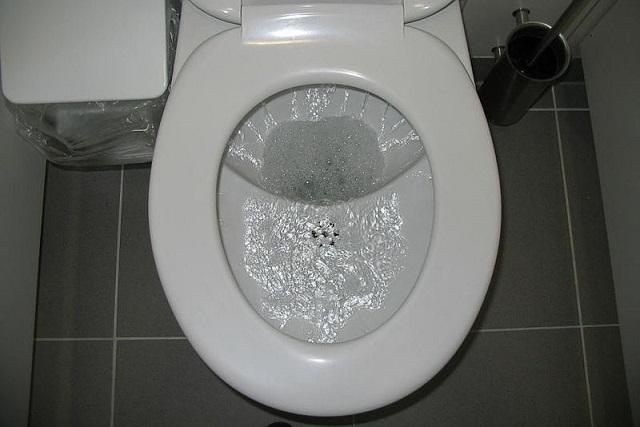 We have so much clean water that we pee and poo into it, then wash it away with more clean water. Img from E&T Magazine.

The three incidents we’ve highlighted earlier were the big ones, but we’re pretty sure that many of you have had your water supply cut off one time or another. Almost every state has had reports of water shortages, so if you haven’t experienced it at least once, you should consider yourself very lucky.

For those of us who freshly survived the two or three days without water, we might remember how even basic things like washing up and drinking can turn out to be a real chore. More unfortunate people in urban areas may have to line up for a long time and carry heavy pails of water back home, which can be troublesome for the old and ailing. For those still without access to treated water, even no rain for a week can be a cause for worry. And for businesses and industries, water rationing can grind some operations to a halt, but even if they don’t, they can lower productivity or even increase the cost.

Looking at it logically, we’re not really a desert country: we actually receive an average of 3,000mm of rainfall every year, which is a lot more than most of the world. This rainfall, along with other sources of water like springs and rivers, gives us an estimated 900 trillion liters of freshwater every year. So why are we still having trouble with water even now? Well, the recent water cut was actually for maintenance work and not really because we don’t have water… but anyways.

We can always chalk it up to bad water management and other factors, but part of the problem is us as well: there’s more of us now than before, and more people = more water usage. To make matters worse, as we’ve already said in our previous articles, Malaysians use up a lot more water compared to our neighbors, sometimes more than we really need. This is perhaps why the government has been recently considering raising the price of water.

“Malaysians think water is cheap and they can waste water as they like. When there is a price tag to it maybe then will people respect its use. Increasing anything makes the government unpopular but it has to be done at some point of time,” – Dr Xavier Jayakumar, Minister of Water, Land and Natural Resources, to the Star.

So if the memory of the recent water shortage still haunts you and you want to learn how to save water, consider checking out this article. Or just be sensible with water usage lah. After all, as Passenger said in their song, “You only need the light when it’s burning low, only miss the water when got rationing,”