Last year, a new gomen took over. And immediately, many of the existing government contracts were in jeopardy. MyEG’s stock price dropped by more than 10 sen per share in a matter of days, and another contract that was in danger was SKIN – a proposed upgrade of our Immigration system.

While there are those who would argue that many of the contracts signed by the previous government might not be necessary in these belt-tightening times, there are also those who would suggest that it was about time that our immigration system, built on 1990s tech, was long over-due for an upgrade.

(we had difficulty finding the exact age of myIMMs, but based on this Straits Times article in 2016, myIMMs is 23 years old at the time of writing)

Some of the remarks made about the immigration services. Screenshots from Facebook. According to the police heads, international and local syndicates have been working together to hack into the 20-something-year-old myIMMs since 2010 to allow illegal entry of people (human trafficking and terrorism) into Malaysia. Syndicates could easily gain access into the system by giving instructions to some of the immigration officers. Not only could these hackers look at our files and approve or reject applications, but they could also see all the other Immigration staff IDs and CREATE their own IDs!

“These overseas syndicates – their responsibility is to bring the man over and collect payments, while the syndicates here, their job is to accept. These are the ones that tried to penetrate the system.” – said then deputy police chief Noor Rashid Ibrahim.

But we can’t tell if the hackers look like this.

The hacking caused glitches in the whole system and interruptions to the airport’s passport-verification system to make it harder for the officers to scan the details of the visitors (including biometric data, work permits and visa details), hence letting the traffickees and terrorists pass through immigration (although Zahid famously clarified that they weren’t letting through terrorists, ONLY illegal immigrants.)

Consequently, 37 immigration officers were penalised (firing 15, suspending 14 and freezing the salaries of 8 of them). Police later detained 5 officers who were accused of sabotaging the myIMMs, whom former IGP Khalid Abu Bakar said were detained to assist investigations.

While any tech system is bound to have bugs and glitches, the main problem with the old system was that it used tech that was so outdated that it was so easy for the syndicates to hack into the system. Plus, the immigration department was unhappy with the vendor’s work on the biometric system. The Auditor-General’s 2015 report stated that myIMMs was not good enough in meeting the Immigration dept’s operational needs. It got to the point that Zahid warned that the govt would not hesitate to cancel myIMMs vendor contracts if the services failed to be up to mark.

And that’s why SKIN (Sistem Kawalan Imigresen Nasional) was proposed

So, with these flaws, there have been some calls for improvement of the system. That’s why the Home Ministry signed a 15-year concession agreement with Prestariang on 9 August 2017 to implement SKIN by 2021, the year when the govt was expected to start paying for SKIN. The concession consisted of a 3-year development period and a 12-year maintenance service period.

“SKIN is designed to perfect the current immigration system with added values besides meeting the current and future needs especially in enhancing the country’s border control,” – Zahid said. We couldn’t find a photo of SKIN, so here’s a photo of the immigration counters. Image from Malaysians Must Know The Truth Blog.

Here were some of the things they aimed to improve through SKIN:

Basically, they wanted to upgrade to the latest tech possible for the whole system, make processes and services more efficient, and give better protection measures for the country’s safety.

Sounds ok wut. Why did it get cancelled?

Since Muhyiddin became the Home Minister, the Home Ministry was ady reviewing projects that might financially impact Malaysia including SKIN, since the PH govt has been reviewing major projects approved by the previous govt.

A special committee reviewed the SKIN project in detail and found some flaws in the concession terms: So, the ministry issued a termination letter to Prestariang to end the contract. Currently, the Home Ministry is discussing with Prestariang to determine how much to compensate for cancelling the project. You know how much of a bummer it would be if you did so much work only for your friend to bail on you and say that it’s not gonna work but you wanna be rewarded for your effort and all.

“Following the cancellation of the project, the ministry will discuss and negotiate with the company. Perhaps there will be compensation for their efforts. We want the matter to be resolved amicably.” – said Muhyiddin.

Apart from SKIN, other concession agreements with vendors who managed the many immigration systems like the eNTRI (visa for Indian and Chinese nationals) system (which Muhyiddin said failed to screen the visitors entering Malaysia) have also been reviewed. On top of that, Muhyiddin also said that the MACC was investigating allegations of power abuse involving these other concessions too.

So the gomen has a totally new, integrated system being introduced, but that’s also being investigated for corruption too… aiyo.

As recommended by the committee, the Home Ministry announced that the SKIN project got cancelled to make way for a new system (probably known as myIMMs Global) that is comprehensive, effective, user-friendly and cost-saving, which is expected to fully replace the old one in at least 2 years.

The ministry claimed that this new system will meet the Immigration dept’s needs and might help the govt save nearly RM1billion by pushing for open tender (we couldn’t find the actual cost of creating this new system). But even then, the ministry still couldn’t escape a bit of backlash. In the middle of January 2019, Khairul Dzaimee Daud replaced Mustafar Ali as the Immigration director-general (DG), after the latter retired. So, now this guy is in charge of the immigration dept lah. Image from FMT.

So, according to Malaysiakini, there were allegations that this DG change might be linked to an attempt to award a contract for the dept’s IT system to another company (which Muhyiddin denied), so MACC started investigating for any corruption in the Home Ministry. MACC chief commissioner Shukri Abdull confirmed receiving the complaint but didn’t wanna say more when contacted by Malaysiakini.

In response, Muhyiddin dismissed the allegations as baseless and bad-intentioned by those who were salty about SKIN’s cancellation.

“The allegation is malicious and not true at all. It may have been deliberately initiated by those with vested interests unhappy with the Home Ministry proposal to cancel the SKIN project which has been agreed to by the (previous) Cabinet.” – said Muhyiddin.

Oh well.. Regardless of whether the allegations are true or not, at least MACC is now allowed to do its job, seeing that MACC has been investigating both the old and new peeps. 🙂 #malaysiabaru 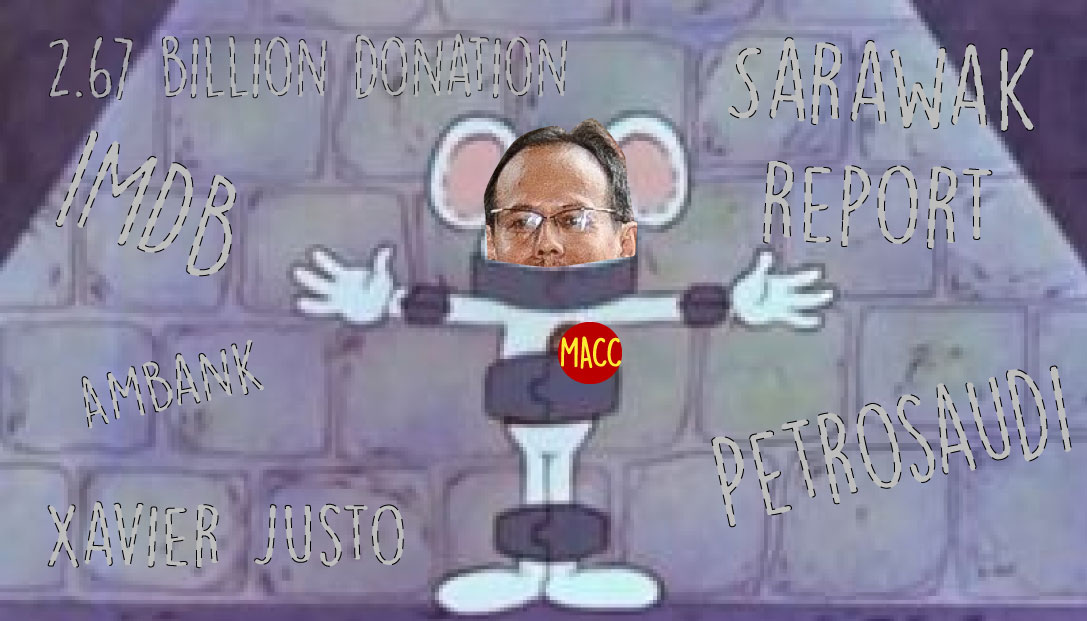 To see what we mean by MACC being able to do its job now, you can read our past article about how MACC was trying to do its job earlier but couldn’t.