UPDATE: We originally wrote this article waaaay back in 2015. Since then, some things have changed. However, looking back… it’s clear now that the MACC was trying its best to bring alot of things to light that it couldn’t, and people kept getting transferred to the Prime Minister’s office, or fired.

We’ve once compared the 1MDB investigation to a Spanish soap opera directed by M. Night Shyamalan – a neverending drama that starts off with high hopes that, over time, degrades into a series of complicated plot twists with no satisfying ending in sight.

But now it seems that we forgot to add in another plot element: character twists. Kinda like in Severus Snape in the Harry Potter series, you’re thrown into an emotional rollercoaster when the bad guy you’ve grown to love to hate is suddenly revealed to be the good guy. 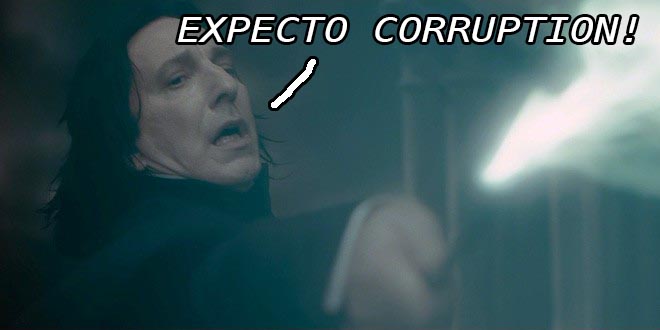 And the Severus Snape in the 1MDB saga is the MACC, or the Malaysian Anti-Corruption Commission. Although anti-corruption task forces have been around in Malaysia since 1959, they existed as separate units under the the PDRM (for investigation),  the Prime Minister’s Department (for prevention), and the Attorney-General’s Chambers (for prosecution). Over the years, these units were gradually unified into a single task force which led to the formation of the MACC as an “independent, transparent, and professional body” in 2009.

However, the MACC wasn’t held in very high regard by the public; with reports of vanishing evidence, questionable conclusions to investigations of high-ranking people, corrupt MACC officers, and witnesses “committing suicide” at their headquarters. You can read a more comprehensive list in our other article here.

So as you might expect, when the MACC was named as one of the bodies in the task force set up to investigate 1MDB, the general reaction was: Screencapped from Facebook. Note the date on the comments. Image from The Malay Mail Online. Click to link.

The MACC have pretty much gone out to say that the police has disrupted their investigation by arresting and/or questioning their personnel, confiscating laptops and documents, and that even the homes of some officers – one of them the investigating officer on the SRC International case – have been searched. “I’m saddened by this [investigation into the MACC] as we had done our best in the investigations in the search of the truth … Suddenly our Deputy Public Prosecutor was detained at 1am. I’m baffled at how this could have happened. This is madness and I feel someone had forced the police to do so.” – Datuk Bahri Mohammad Zin, as quoted by Astro Awani.

Datuk Bahri also proved to be an extremely quotable man, when he later vowed to find those responsible for ordering the arrests:

In their defence, the police claimed no one was ordering the arrests, stressing that “each government agency has it’s own responsibility in the investigation, as long as it’s in line with the original aim of finding the truth” so they decided to focus on the leaks of the investigation to certain parties like Sarawak Report – leaks that apparently came from the MACC. So according to this route of logic, the truth can be uncovered by plugging the leak. Perhaps they’ll find Princess Peach somewhere along the way as well.

….said it was a “donation”. A two-point-six BILLION Ringgit donation. But hang on, there are a couple sides to this story, which we will break down to points:

So despite the initial reaction from many (including us) that the donation explanation might be the MACC’s chickenpoop way of ending the investigation, they’ll actually be investigating the matter further to determine what happened to the money, and if the money was misused for the 2013 election. Well, that is if they have any personnel or equipment left by that time.

3. The MACC has been removed from the Prime Minister’s Department

Screencapped in March. Click to see “Page not found” page.

The screencap above was taken from the Prime Minister’s Office website in March for one of our articles, and this is what it looks like nao: What happens when you click on the picture below.

So yea… although the MACC is supposed to be an independent body, it was actually under the Prime Minister’s Department (PMD), as listed on the Prime Minister’s Office (PMO) website. We don’t actually know what the difference between the two are, but it seems that the PMO’s site more of a personal one whereas the PMD’s site is for gomen matters.

The MACC was listed as one of the agencies under the PMD at least till early July, when we took a screenshot of the same page for a different article. The page has since been taken down from the PMO’s site with no replacement, while a recently-updated list (July 20th) on the PMD’s website does not list the MACC at all.

NAH, BACA:
RM19.4 billion in GST refunds missing? Here's what UMNO politicians are saying about it.

We don’t know what the reason for this is… perhaps it was an error in listing, or a way to distance the MACC from the Prime Minister to give them more credibility, or the MACC has finally become a fully independent body, or maybe they just got disowned. As far as we know (from Google) there has been no explanation for this. Suspicious, kan?

4. The MACC held prayers cause maybe that’s all they could do MACC officers in a special prayer session. Image from The Malay Mail Online.

While many of us use daily prayer as a form of guidance or even a way to cope with the pressures of daily life, it’s when fit hits the shan that prayer to a higher being becomes more important than ever. So it’s perhaps the MACC is sending out quite a strong message (or maybe an SOS) when they held a special Islamic prayer session “seeking Allah’s guidance to perform their duties and prevent the sin of corruption that would land them in Hell” on August 4th.

The session was led by Datuk Seri Zakaria Jaffar, the MACC’s deputy chief commissioner for Management and Professionalism, just before he was due to retire. He said (quite cryptically) that nothing can be done about the past, but they can pray for a better future for the country, adding:

“We asked for Allah SWT to assist us with what we don’t know in future. We also prayed for blessings from Allah SWT for the MACC, and all its officers and their families” – Datuk Seri Zakaria Jaffar, MACC’s (retiring) deputy chief commissioner, as quoted by Malaysian Digest.

However, he didn’t answer a question on whether or not the special prayer session was related to the recent crackdown of the MACC by the police.

5. The MACC even joined forces with DAP and other Opposition parties Okay, before you say it, the MACC’s info page does mention that there are Opposition politicians involved in monitoring its activities so it’s not like this is a Dragonball-like fusion where Lim Kit Siang and the MACC will merge to become a super-entity.

Would be quite funny though.

However, the “awwww” moment comes from the fact that DAP led a gathering comprised of Opposition leaders (including PKR and Gerakan Harapan Baru) to the MACC headquarters as a show of solidarity. Even shake hands summore! This is noted to be a far cry from the days when DAP would cucuk MACC non-stop for the death of Teoh Beng Hock, with some people even saying that it was a hypocritical action.

“We should not carry out activities as if suspecting each other as traitors, MACC should be allowed to carry out its anti corruption duty,” – Lim Kit Siang, as quoted by The Malay Mail Online.

The MACC’s strategic communications director Rohaizad Yaakob responded by saying that they were “grateful for the support shown” by the opposition leaders as well as the people and will “continue to do their best work”.

Hypocritical or otherwise, it looks like the start of a bromance to us 😛

6. Even the public are backing the MACC??!

Remember the screencap of the comments about the MACC back at the beginning of this article? Well, no need to scroll all the way back up… we’ll just tell you that they were pretty darn negative.

But then over the last few days, the tone of the MACC comments seem to have taken a more positive light: Screencapped from Facebook at the time of writing (Aug 7th).

Perhaps the reason for this is that the Rakyat is beginning to MA-see-see the fact that the MACC were in fact doing their jobs in regards to the 1MDB investigation and are now being punished for it.

A Facebook group that was formed to support the MACC grew from an initial 170 members to 7,000 in less than 24 hours and at the time of writing has more than 20,000. Even the founder of the Rakyat Bersama SPRM group was surprised at the popularity of the group, saying he only invited 170 of his friends to join, and he didn’t know any of the other members.

“But it is now clear that the public is rallying behind MACC, which is dealing with untold challenges right now in its investigations against corruption and misappropriation,” – Azlan Sharif, founder of the Rakyat Bersama SPRM Facebook group, as quoted by The Malaysian Insider.

Did the MACC come across something that some higher authority doesn’t want us to see?

If you’ve arrived at the conclusion of “Yes,” then

We can’t say for sure that the MACC (and maybe some other parts of the task force) have uncovered evidence that proves PM Najib’s involvement in the 1MDB fiasco – in fact we can’t even say that at all since it’s an irresponsible and possibly a criminal offense to make such unsubstantiated accusations towards our leaders. That previous sentence was just an example of what you shouldn’t say, so don’t report us, OK? #PSA #chupexample

However, it does seem that life has become a lot harder not just for the MACC, but also for the other bodies involved in the investigation. You can read the deets here. If you couple it with how the media and the rakyat are also gradually being silenced over the issue, and the fact that evidence from the MACC is confiscated to be brought to who-knows-where; things aren’t looking too bright indeed.

But here’s the silver lining – if former foes like DAP and the MACC can shake hands and stand together for a common cause, AND if an agency long accused of not properly carrying out their duties are actually found to desperately want to do their jobs – perhaps there’s some hope for us all.