[Ed’s note: This article was originally published on 18th January 2016]

OMG ugaiz, El Nino is coming! No it’s not the latest album by Jennifer Lopez. Y’know, the time where everyone sweats and stinks more than usual. In very simple terms, El Nino is a weather occurrence where temperatures around the Pacific Ocean near the equator go up higher than usual. This happens when winds that normally blow westward, gostan towards the east, causing all kinds of weird weather madness around the world.

Though it’s a global event, it affects countries differently. In Malaysia for example, we feel like we’re living in an oven, everything so panas and dry, whereas Peru will experience massive flooding. Either way, it leads to poor harvests, which is bad for us all. And this year, we are expecting the WORST El Nino episode, surpassing even the 1997-1998 one (the most powerful in history).

Not scared la. How bad can El Nino possibly be this time? It’s so hot, his shirt burned off. Image from thedaoofdragonball.com

“To know the extent of the damage El Nino can do, you can look at some of the news headlines back in 1998.” – Dr. Dzaeman told CILISOS The news covers Malaysia, Southeast Asia and the US (top left). Click to read the article from BBC

Our intern hit a gold mine when he found this archive site with Singaporean and Malaysian newspapers. Click here to check out all the headlines on 1997-1998 El Nino from Berita Harian, The Straits Times and The Business Times. Unfortunately, the full articles are locked but you can get a gist of things just from the headlines, including one about Indonesia blaming the forest fires on El Nino.

Malaysia experienced its hottest temperature on record at 40.1°C in Apr 1998. It was one of the warmest years for the whole Southeast Asian region, while Indonesia faced its worst drought. Temperatures aside, there was HAZE! Is the terrible 1997 haze is related to El Nino? It is. You see, Indonesia used to be full of trees. However, thanks to huge land changes, trees are no more there. But trees are SMART!

“Some trees are adapted to El Nino events and use these as triggers to reproduce.” – Dr. Tajang

Anyway, since there were lesser trees, El Nino did partly help start fires in highly-flammable peatlands, spreading haze all across SEA. By the end of it, 8-10 million hectares of forests were destroyed… 40,000 people went to hospital… 29 Indonesian deaths were recorded… and the mortality rate in Malaysia also increased, especially among babies and people aged 65 to 74.

So could this year’s El Nino possibly bring worse outcomes than what we’ve experienced in 1997? Maybe. But we can’t say that fersure coz it’s the weather. Nola, but El Nino could make it worse

And weather predictions are only predictions at the end of the day, Dr. Tajang told CILISOS. And Dr. Thomas shared some slides from the NOAA Climate Prediction Centre (NCEP) with us showing there were like 20 different predictions on El Nino this year. 20!!! None of which even look alike! Slide from NOAA Climate Prediction Centre (NCEP)

Here’s another chart Dr. Thomas shared about something called ‘sea surface temperature anomalies’. What this shows is whether the ocean has warmer or cooler than average conditions. So obviously the red and orangey colours indicate warmer and blue indicates cooler: But for a real-time map right, you can click on the image below. Click it, seriously. It’s glorious. We could stare at it for hours. On top of that experts are saying El Nino could become more frequent in time. Previously, the cycle used to be between 2-7 years.

“We’re going through very unpredictable times. We might see El Nino frequencies a bit higher, though they might not always be full-fledged ones. We’ve had quite a pronounced dry period for almost three years back-to-back. This cycle is quite worrying in terms of our preparedness.” – Dr. Dzaeman

Oh crud! Are we really prepared for this big change in weather pattern? 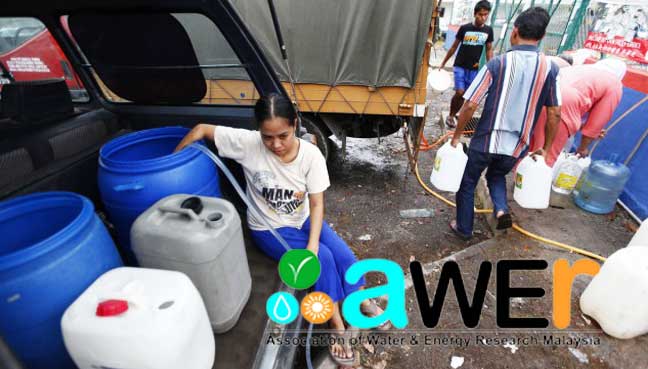 Remember those rationing days, peepul? Don’t wanna go through that again do we? Image from Free Malaysia Today

The government is already aware El Nino’s coming and they’ve put some plans into motion. For one, the National Disaster Manage­ment Agency has set up a dedicated working group to monitor the hot and dry situation and coordinate immediate action. Meanwhile, this is what Selangor’s doing:

Who left the tap running?! Image from annewitton.co.uk

So far, so good. The authorities say dam levels still quite high and there’s no need to ration water yet. Same for Penang, even without pumping water from other sources. And there were no warning alarms from other states yet on water shortage. However, the Association of Water and Energy Malaysia (AWER) and state authorities advised people not to waste water anyway. It’s good practice la. Don’t liekdis:

But that’s just for this round of El Nino. Is that enough for the country in the long-term, especially if El Nino becomes more frequent?

Actually, according to Dr. Dzaeman and Dr. Tajang, there are a coupla things we can do which will safeguard our water supply for the future.

Malaysia could learn from Australia on how to handle water shortage Why Australia? Because it’s a freaking desert there.

“Australia is a super hard place to live in. Since the colonial times, they had to live with water shortage. It’s programmed into their brain not to waste water. Problem is, we don’t have that culture here, so it’s a bit hard to reprogramme everyone to change their lifestyle.” – Dr. Tajang

On top of this mindset, the authorities enforce rainwater collection. All their state governments made it compulsory to have houses built with rainwater harvesting systems for grey water use – ie. toilet taps, shower, garden hose, etc. Everything that’s not kitchen water is grey water. A few places in the US enforce this too.

Germany took it a step further with rain taxes! The more rainwater is collected, less runoff goes into storm drains. Less runoff allows them to build smaller sewers, which ultimately saves construction and maintenance cost! So Germans get tax reduction by converting their solid pavement/roofs into porous ones. Maybe if we implement this in the East Coast, we can solve the banjir problem! 🙂 Understandably, it’s not cheap to install a system la. The prices can range from RM1,500 to RM10,000! Eh, it ain’t no Coleman water cooler k:

“You need to put it in your roof and funnel water into your tank, and then you need to filter it as well, to remove all the silt and dirt.” – Dr. Dzaeman

Price depends on the tank size, where you install it (roof, front yard, or balcony), and pump and filter. You want lagi terrer, just install UV light, then the rainwater is even good enough to drink. There are several Malaysian companies selling rainwater systems and you can find them online.

If you got no budget, you still can collect rainwater in a huge tangki to wash car, wash porch, or other stuff. Just make sure you cover it with a net la, otherwise aedes mosquito membiak. But that’s not all…Australia even enforces water restrictions, like no watering gardens, using sprinklers, washing cars, refilling swimming pools and such. If anyone breaks these rules, they have water inspectors who can punish people. See how they’re so strict there? They have no choice coz they are the world’s driest inhabited continent.

If Malaysia was so desperate, we might even start implementing some of these rules. But we shouldn’t wait until everyone’s crawling on the ground with dehydration la. It all starts with changing people’s mindset. We need to learn how precious water is and stop wasting it. Let’s make sure the only ‘El Nino problem’ Malaysia ever faces is a lousy album release by Jennifer Lopez, not a nationwide disaster that makes the country suffer.

Share this article:
NAH, BACA:
Guess how much your air cond contributes to your electric bill?