DISCLAIMER: This will be one of a rare few opinion pieces that will ever be published by CILISOS – i.e. I am writing this story out of my buntut (mostly).

A few days ago, when The Edge published that infamous black-red headline, I knew that things would be heating up for Malaysian media. Their Note from The Publisher literally dared the government to shut them down. To those of you who didn’t hear, shortly after the article came out, our Home Minister ordered The Edge Weekly and The Edge Financial Daily papers to be suspended for three months. This applies to their print edition, which unlike their online editions, needs a permit to publish. 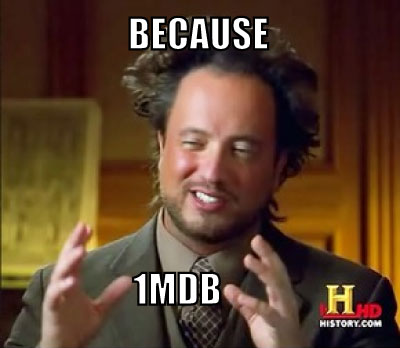 This CRAZY money trail for 1MDB made our heads explode halfway, but we’re glad they took the effort to do it

Let’s say this first. While we don’t necessarily condone everything The Edge does (or understand it fully, like the image on the right), what we’re standing for here isn’t their coverage of 1MDB, but THEIR RIGHT to cover. As a democracy, one of the most important things to champion is freedom of information – be it from The Edge, the NST or even Ridhuan Tee.

Media freedom in Malaysia today isn’t as bad as back in 1987. Most publications get away regularly with alot (we’re actually surprised some of them are still around), although there are still taboo words like Rosmah, Malaysian royalty and formerly, Najib, that even we try to tread carefully around.

And don’t get us wrong, media should always be careful about what they publish, but for the greater good of SOCIETY, not THE ONES IN CHARGE.

Choosing your battles and your boundaries

Unfortunately, a media company is still a company, and with mouths to feed (350 mouths for The Edge, 5 for CILISOS)… so we’re playing the long game of informing Malaysians, although we do push boundaries when we can. The Edge has pushed those boundaries further than no other publication has dared to so far. Especially for newspapers, which are much more heavily regulated than online publications such as ours, they really put everything on the line, and for that alone, regardless of disagreements, they deserve the respect and gratitude of ALL Malaysians.

Unfortunately this time, our boundaries have been pushed as well by the Home Ministry. 1MDB should not be a taboo topic. This fund has already admitted to being RM42 billion in debt, with little to show for it, and our Prime Minister at the helm. Doesn’t that sound like something of national concern?

So why should you, The Rakyat care? When someone pushes a boundary like this, it’s kind of a test. The Edge pushing their headline was a test to see how the authorities would respond, and NOW, the authorities are pushing to see how we will respond. This is what our co-founder, and ex-EDC of The Star had to say.

“All of us in the media are shapers of society. We have a role to play – not just to make money. Money without freedom, without civil liberty is no different from sitting in a high-class jail. Our children live their lives depending on our actions today. We may pay a price for our actions, but so long as our actions are noble, we will have nothing to fear.” – Tan Sri Vincent Lee, Honorary Life President at Association of Advertising Agents Malaysia (4As), CILISOS co-founder.

But the scariest thing for me right now isn’t being closed down – it’s no one caring. What would it mean if next week you, the Rakyat just goes back to reading the next listicle, or sharing the next cat picture?

It would mean that Malaysian media are royally screwed. That us risking our livelihoods has done nothing to spur you into action. So for the sake of promoting free speech and to make us, the media feel a bit better, why don’t you…

And be prepared to show support when the time comes for it. Cos if there was a time that you could pay media back for all the free content you get delivered to your phone, tablet or laptop everyday, this is it. We need you, the public… TO CARE. Deeply. Because at this point in Malaysian history, we are all #ATTHEEDGE.