What is an opinion? We’ve been seeing a lot of opinion pieces floating around online, but more frequently now in news portals. So how do we differentiate between opinion and news?

An opinion is a point of view or judgement that’s not necessarily based on fact or total accuracy but newspapers publish them because, while most (note we said “most”) news agencies try (note we said “try”) to publish unbiased news, these agencies have historically leaned towards a certain political faction or idea.

Although the news would be presented objectively, the ideals held by the newspaper can be expressed through editorials, opinions, and columns. These lend an “identity” to the publication and help readers decide which paper better caters to their own interests.

So to differentiate between news and opinion columns, news agencies that publish them have a little disclaimer at the bottom to indicate that they aren’t responsible for and don’t necessarily share the sentiments expressed.

Screencapped from The Malay Mail Online

Actually on that note, why do they always put it at the bottom? We’re sure there’s a reason for it other than trapping some poor CILISOS writer into putting down information from these articles before going “ARGGG! It’s an opinion piece! Not credible! Not credible! Wheeo wheeo!” PUT DISCLAIMER AT THE TOP NEXT TIME PLS OKAY? KTHXBAI!

But back to the topic, as the saying goes “Opinions are like armpits, you can’t scratch both at the same time without looking like a monkey“.

Ummm….Actually we forgot what the saying was but the point is that everyone has an opinion and some are more vocal about theirs than others.

And then there’s Ridhuan Tee. What did Ridhuan Tee do this time?

So for those of you who have somehow missed out on the drama, Tee is a Chinese-Muslim Professor at the Institut Penyelidikan Produk dan Ketamadunan Islam at Universiti Sultan Zainal Abidin. He’s best known for his regular opinion column in local Bahasa Malaysia paper Sinar Harian which has generated quite a bit of controversy over the years, the most recent being his views on rape.

Following the backlash and counter-articles from women’s right groups and rape survivors, Tee has come out to say that his words (which were originally written in BM) were taken out of context by the English language portals.

To be honest, we were going to write an article questioning his stance – which won’t be the first time cause we’ve jabbed him once or twice before in some of our other older articles – but then we figured, why not give him the benefit of doubt?

So with an open mind, we read through some of his other Sinar Harian columns and found that while his opinions may not necessarily be our cup of tee, he does express some pretty valid points. Yeah we said it, but you can be the judge of it yourself…

1. “Malaysians are losing their national and ethnic identity” One point that Tee touches on a lot across several articles is the loss of identity among Malaysian youth, especially those who have studied overseas or been exposed to too many western TV shows.

(“I’m very worried with those who supposedly come from the best universities in the world … they become more White than white people or more Chinese than Chinese people.”)

In another article titled “Tazkirah untuk orang pencen“, he urges those with children and/or grandchildren to raise them with faith and ethnic identity; mentioning how many young Malays today are only Malay in genetics but are completely NOT in their actions, being “more Western than the West”.

This point makes up the basis of quite a few of his arguments, so we’ll expand further on this below.

2. “Malaysians are focusing too much on Western ideals and rankings”

In that same article, Tee addresses the upset a majority of us felt when our local universities fell further in global university rankings.

Tee argues that an education from a high-ranking or world-renowned university might actually be worse for the student, when he or she returns with western ideals (the quote in point 1). This is a concern because that student may have developed a loyalty towards that country.

(“What’s the use of coming out from the world’s best university, if their hearts are [impure]. Disloyal to [Malaysia], even betraying and spilling national secrets to others”)

He also warns against falling into the trap of westerners politicizing education for their profit, saying that we’re too focused on the western approval and being left behind because of it. Also, the focus on western-sourced books in higher education means that works by local scholars are ignored.

(“Everything done by the West is right. We are still in a colonized mind and attitude. The West is very smart at [deception]. Create a ranking, then change the criteria from time to time. We’re [left clamoring] after it.”)

He also points out in a different article how opinions from western scholars are seen as being more relevant than those of local ones, citing how BFM’s interview with American religious scholar Reza Aslan was given so much weight when he has no understanding of Malaysia’s culture and history.

This brings us to something that we noticed in the Facebook comments on one of our recent articles on free Qurans. A user started posting pictures of westerners (ie. non-Asians) who have reverted to Islam to (we assume) validate his point. 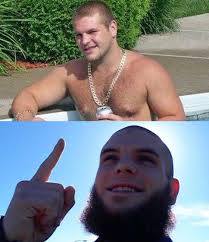 This of course prompted another user to question:

So really, do we need the west to validate who we are, even when it comes to religion?

3. “Islam is a fundamentalist religion” Tee goes on to give his definition of “fundamental”:

(“Fundamental, namely Muslims that really understand and adhere to Islam, or make Islam the way of life, not Islam [for show] only.”)

He distincts this from extremists, saying that fundamentalists defend the religion and rights of Muslims while extremists react without thinking and/or spread false beliefs.  He elaborates on this further in a few more articles, saying the argument of fundamentalism and moderation is inaccurate based on the definition of those words in the English language. Instead, he uses the term wasatiyyah that has no English word equivalent. He defines it as “to be moderate, to be in the middle, and to be the best.”

NAH, BACA:
[SURVEY RESULTS] Can you guess the #1 item Malaysians must pack for their holidays?

4. “Racial unity comes from the heart, not from what you show” In an article titled “Krisis identiti dan ultra kiasu“, Tee pointed out that adopting cultural practices from other races such as eating with hands or pointing out places of worship of different religions next to each other isn’t proof of unity.

(“Houses of worship located next to each other, isn’t indicative that our society is living harmoniously, if they’re ignorant of history. What’s the use of being close [to each other] when full of suspicion? That is what’s happening.”)

We’ve always been cautioned against “all talk and no action,” that you prove your intention by showing it. But in a study conducted in 2011 on the effectiveness of the 1Malaysia campaign on national unity, the researchers found that Malaysian youths understood the concept of national unity but failed to practice it to the same degree.

It also found that being exposed to unity ads increased understanding but didn’t affect practice. So perhaps what we’ve failed to reach is the sincerity, or rather, the heart.

(“The more important question is the question of heart, ultra kiasu or not.”)

We don’t know how to explain a concept as abstract as “heart”, so here’s a practical example:

Imagine you’re having a meeting with your boss and he says you’ve been underperforming. “I’ll buck up and double productivity,” you say. “Yeah right, all talk no action only,” says your boss. “Oh yeah? Well I’ll show you!” exclaim yourself as you storm out of the office in slow motion, working non-stop for the next month to not just double but TRIPLE your productivity. Looks like you showed him. Hah!

In that sense, would you still be working as hard if that boss was replaced with a more lenient one?

5. “The gomen’s economic plans should be burdening the rich, not the regular people” Many people have accused Tee of being an UMNO fanboy but he has actually criticized the ruling party for allowing economic policies to take a toll on the common people rather than the rich. In “Jangan sakiti hati Melayu,” Tee says:

(“… [Citizens] have been notified of an upcoming raise in toll price by the UMNO-led government. I’m getting confused. What’s the meaning of the tagline Gagasan 1Malaysia, rakyat didahulukan, pencapaian diutamakan? Are the citizens only placed first when elections come around? After that, placed later*.” –  *”Dikemudiankan” is a pun on “Rakyat didahulukan”

He also points out that many Malays, who have traditionally supported UMNO, are getting disillusioned with the party’s inability to curb the rising cost of living and failing to address it to the rakyat, instead resorting to overly simplistic answers. In response to the Transportation Minister’s answer to the raising toll cost to “take regular roads instead,” Tee says:

“We assume that when an economist is elected … to be a minister … he would pick his brains … [to give] the best way to care for the well-being of citizens. This isn’t, his answer is so simplistic .. This is not a statesman’s answer. My advice, don’t [dumb yourself down*] after becoming a minister. Supposedly when elected a minister, our intellectual capabilities are supposed to expand.” – *This is a reference to Pak Pandir, which is a simpleton character in Malay literature.

He warns that if this goes on, many Malays might start aligning themselves with the ultra kiasu parties when they start becoming more open to Islam (Thanks to PAS) – making UMNO irrelevant.

Actually… he has been investigated for sedition before, where he also lamented that no one stood up to defend him like they did Azmi Sharom. He was also barred from entering Sarawak last December, where he was supposed to deliver a speech. Understandably, social media went wild with the LOLs and YAYs. And maybe some intellectual discussion, but mostly LOLs and YAYs. Sure, he might make some pretty strong statements, but it might be due to the fact that Tee’s opinions resonate with his reader base. Also, he seems to take loud, hardline approaches which have made the careers of people such as Bill O’Reilly. If you’re not sure who this guy is, here’s a video:

Sure, he might use somewhat offensive terms such as “ultra kiasu” and “yang tak bersunat” but these terms are instantly identified with him and creates a relatability with his audience despite how unpopular it might be with many other readers – basically becoming associated with him. If anything, it’s good marketing.

BTW, Tee has explained that ultra kiasu isn’t a reference to Chinese people, but people who put their own interests over the greater good.

But going back to the sedition thing, the main reason he is and should be allowed to continue writing is to respect his right to freedom of speech.

Even if we may not fully agree with what he says, we should at least allow him to express it; and in turn, be allowed the same rights to disagree with him. We’ll leave you with this quote…

“I detest what you write, but I would give my life to make it possible for you to continue to write.” – Beatrice Evelyn Hall

which we feel suits our stance to a…… Tee.

P/S: We weren’t paid to write this article k