Recently, yet another new government policy became a hot topic of discussion, and it involves something that allows you to do this:

Blocking out the haters in style. Gif from Giphy.

No, not just rolling up your car window, but rolling up your super tinted car window. Because it would’ve been awkward if that window had been clear. Anyways, basically the Transport Minister Anthony Loke recently announced revisions to some car window-tinting rules, and very basically it allows people from all walks of life to tint their rear car windows and rear windshield as dark as they want, and for a fee or RM5k-ish, the front windows and windshield as well.

This amendment is said to allow motorists to have the convenience of darker rear windows and cooler vehicles as well as improving government revenue, with the government expecting to earn RM6 million a year from this. This new rule had already been effective since last week (May 8th), and enforcement will commence sometime in August. 2019 regulations. Imgs from DSF and JustPushStart.

While some may be hurrah-ing at this new ruling, others had been a bit less supportive. We’ll get to the reason in a bit, but the thing you should know about this ruling is that…

Practically anyone with RM5,000 can have really dark car windows Most people probably don’t think too much about the intricacies of tinting their car windows, but on the regulating side, it’s something to think about. Before 1991, Malaysia didn’t have any specific rule about tinting car windows. It generally fell under the Motor Vehicle Rules (Cons­truction and Use) 1959, which only specified that vehicles must not be dangerous to road users. That’s not specific enough, so in 1991 the Motor Vehicles (Prohibition of Certain Types of Glass) Rules 1991 was introduced.

Starting then, the darkness of each window is specified in terms of its visible light transmission (VLT), which is the percentage of visible light that can pass through the glass. So naturally, the lower the VLT, the darker your window. The 1991 Rules stipulated that the rear door windows’ and rear windshield’s (which we’ll collectively call the rear windows from now on) VLT to be at least 50%, the windows at the front at least 50% as well, and the windshield 70%. Practically every car in Malaysia, whether local or important, are subject to this minimum VLT rule, with a few exceptions. One of them are cars used by government VIPs and enforcement agencies.

“The exemption on tinted glass will be granted to vehicles used by the Yang Di-Pertuan Agong, sultans, governors, Prime Minister, Deputy Prime Minister, Mentris Besar, Chief Ministers, Chief Justice and enforcement agencies like the police and Customs Department. This exemption is only permitted for the safety of the individuals and enforcement officers carrying out risky crime prevention operations,” – Datuk Seri Ismail Ahmad, JPJ director general in 2014, as reported by The Star.

The other exception is for people who apply to the JPJ for permission to have darker tint on their windows, either for security or health reasons. However, it wasn’t that easy. To get permission due to security or health, you have to get a certification letter from either the police or a government physician to be considered. And for health reasons, only those with severe photodermatitis (extreme skin reaction to UV rays) would be considered for an application, but people with the condition in Malaysia are pretty rare. Anyway, the rules were again revised around 2014-ish that lowered the VLT for the back windows to 30%. The recent revision (2019) among other things removes the VLT requirement for the back windows completely, meaning that they can legally be as dark as you want, as long as you have working side mirrors. In addition to that, you can apply for a permit that exempts you from the VLT requirement for the front windows and windshield as well, but still for either safety or health reasons.

Health-related applications seem to be free of charge (but still need letter from gomen physician), but for security-related applications, a service fee of RM50 will be charged. If that goes through, applicants need to pay RM5,000 to get a permit that will allow them to legally darken the windows in the front half for the next two years, after which they have to apply again. So basically, over the years the windows at the back can get darker and darker, and with the new regulations, it seems that anyone can get really dark windows for their cars. This is perhaps why…

Some have opposed this new ruling, calling it a threat to safety

Looking through news reports, it would seem that there are various reasons why people would want darker windows for their cars: health and safety concerns that we discussed above, better protection against the hot sun (although darker may not necessarily mean less heat getting in), and let’s be honest, it’s kinda glamorous to peer at the peasants out of darkened windows as you drive by.

Such class. Much boujee. Gif from Gfycat.

The new ruling might give regular folk to get all that, but some are concerned that it benefit criminals as well. Dave Avran, founder of Malaysians Against Rape, Assault and Snatch Theft, said that it was a ‘no-brainer’ that heavily tinted windows would lead to a higher crime rate.

“Heavily tinted windows will definitely aid criminals in eluding police or carrying out kidnappings. These windows obstruct the work of police and rescue workers, making it difficult to identify suspects in criminal cases or victims in accidents,” – Dave Avran, as reported by The Star.

Dave is not the only citizen concerned about it, and it’s not hard to see why. In the past, the police had cracked down on people illegally having darker windows due to security concerns. In 2014, a nationwide operation called ‘Ops Cermin Gelap‘ targeted such vehicles, and the motive behind that had been to reduce the risk of crime, especially when the police are searching for criminal suspects. According to Dato Ariffin Che Mat, JPJ’s deputy director general then, that was also why the tinting of windows were restricted.

“We are afraid of misuse by criminals, which is why we are limiting the use of tinted windows. Tinted windows make it hard for the authorities to identify criminal suspects,” – Dato Ariffin, as reported by the Borneo Post.

Fast forward to 2017, the Deputy Transport Minister Datuk Abdul Aziz Kaprawi then had stated that foreign vehicles with dark window tints were not allowed into Malaysia, as they were ‘a clear danger’, potentially being used to bring in drug traffickers and IS militants. And even if they’re not being used to hide ne’er-do-wells, allowing everyone to get darker tints raised concerns about traffic safety as well.

The Malaysian Institute of Road Safety Research (Miros) had in a 2015 report cautioned that even a 9% reduction in VLT level can shorten visibility by three to four meters, and further reductions may equate to drivers seeing even less. In a worst case scenario where elderly drivers drive during the twilight or night, dropping the VLT any lower than 35% in the front windows may compromise road safety. On the police side, enforcement of traffic laws will get harder, making it difficult for them to detect drivers using a handphone while driving and passengers not wearing seatbelts, for example.

But it’s not all bad. ACP Zulkefli Yahya, of KL’s Traffic Investigation and Enforcement Department, had said that the police can still carry out enforcement as long as ‘the front windows are not too dark’. He also pointed out that there’s a bright side to the situation, like thieves not being able to spot valuables in a car and therefore may think twice before breaking in. Drivers also won’t be annoyed by fancy headlights or high beams from behind. Aiyo why these people like this. Img from z103.fm.

Still, Datuk Azisman Alias, Deputy Comm of Bukit Aman’s Traffic Investigation and Enforcement Department, claimed that the Transport Minister did not consult the police before announcing the new ruling, which he said can compromise the safety of policemen as well. In a statement, he felt slighted as the police’s views weren’t considered before the ruling, which may make one wonder…

So can gangsters legally get dark windows for their cars for RM5k? 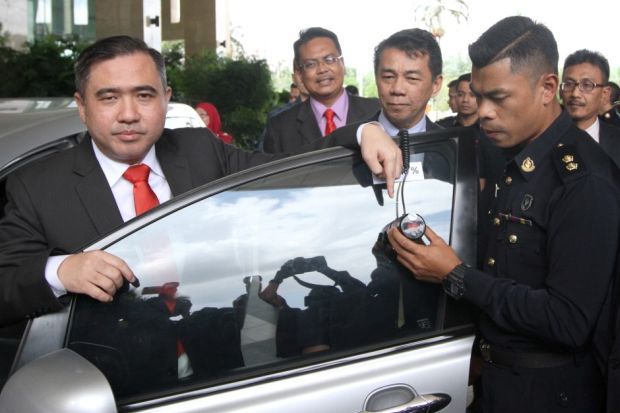 Wah like album cover wan. Img from The Star.

On one hand, it’s not unheard of to have no VLT limit for the rear windows. Some countries, like Japan, the UK and some states in the US have no specifications for their rear windows, and they seem to be doing fine. On the other hand, allowing just about anyone with RM5,000 to spare to drive around in a fully tinted car may seem a bit strange. While Loke had revealed the motive behind the move was as a response to the public’s desire to darken their windows and addressing issues faced by Japan-made cars, which he said usually come with tinted back windows, others, like former Transport Minister Liow Tiong Lai, had questioned the ministry’s recent decision.

Besides asking whether the government had gathered views from relevant authorities and stakeholders before making the decision, Liow had said that the decision to collect RM5,000 appeared as if the ministry is looking at the revenue side.

“There was a by-law for JPJ to exercise its discretion in allowing motorists to fully tint their windows for health purposes and to cater for high profile individuals. It’s not like now where anyone can apply (for fully tinted windows) as long as they can pay,” – Liow Tiong Lai, to FMT.

Looking at past reports concerning special number plates and the AES, it’s not hard to see this move as another revenue generating venture by the new Transport Ministry. Loke himself had revealed that since 2011, about 20,000 applications for tinted windows have been approved by the JPJ, mostly for security purposes and mostly by those from the high-income group. There is money to be made here, but Loke had since denied that this is just a money-making scheme (although he did admit that the government considered the revenue potential).

Not good PR. Gif from LoveThisGif.

Loke had said that just because someone can pay RM5,000, it doesn’t mean that they will get JPJ’s approval: applications will go through a committee set up for the purpose, and it’s up to them whether or not to allow the application. Loke had also said that no one in his office, including him, will have the power to approve tint applications, that being the power of this committee.

“There will be a committee and processes (to follow) particularly, to filter out those with criminal records. I have surrendered my power to this committee,” – Anthony Loke, as reported by the Star.

With the committee and the criminal-record-filtering, it would seem that not just anyone will be able to apply for a fully tinted car, but Datuk Azisman had said that the system can still be gamed. He likened the tinted window permit to a driver’s license, pointing out that that there are road users without a license, yet they still drive.

Regardless of all that, whether or not we agree that it’s a good idea…

…it seems that the deed is already done, with JPJ Sarawak already receiving applications for window tints under the new ruling. So we guess the only thing left to do is wait and see how it turns out.

Share this article:
NAH, BACA:
Like your ex, this new JPJ system will now remember every kesalahan you make