Have you ever just sat in your car in a traffic jam, wishing that your car could fly? *sighs with existential dread*. Imgs from World of Buzz, FossBytes and TamilCPU.

Hahah, you wish. We’re not talking about the possibility of flying cars… yet. Rather, today’s topic is something that might make you go FLIPPITY FLOOPITY WHAT’S ON THAT CAR’S BOOTY??! My number plate brings all the girls to the yard. Imgs from ReactionImage and ZerotoHundred.

You might have noticed that some cars on the road have unusual license plates, like BAMbee and SUKOM and IM4U and all sorts of other stuff. Where are these people getting these numbers from? Who do I have to kill to get one, and subsequently get the girls/guys/gender-ambiguous persons in my hood as well? Expensive ar?

With the government launching the new ‘MALAYSIA’ license plate, we thought we’d answer all these burning questions that you forget the moment traffic moves again. But first, for those who have never noticed all the different license plates before…

All numbers are unique, but some are prettier (and more expensive) than others

If you have ever gone through the process of buying a car or motorcycle (or even trucks and backhoes), you might recall that you have to register your vehicle before you can take it for a spin. This is when you get to choose what number goes on your license plate. Normally, the guys over at JPJ will pull up a list of available numbers for you to choose from, and it will be in the form of <up to three letters> <up to four numbers>. The first letter will correspond to which state you register your vehicle in.

Img taken from MalaysiaVisaOnline, Info taken from Wikipedia. It’s really tiny, but Putrajaya plates begin with ‘F’. No, we didn’t forget to put that in.

So the first car registered in Perak might have ‘A 1‘ on it’s plate, and the next one after that ‘A 2‘ and so on until it gets to ‘A 9999‘. All the possible license plates from ‘A 1‘ to ‘A 9999‘ are called a series, and after all the numbers are used up, the next series will be available for use. So vehicles in the next series will have ‘AA‘ in front of their numbers, followed by ‘AB‘, ‘AC‘… all the way to ‘AYY‘. There are exceptions, like in the case of Langkawi, Sabah and KL plates before the ‘V’ series, where they have an extra letter after the numbers, but basically this is how normal plates work.

But here’s the thing: some numbers are more pretty/ong/meaningful than others, and many people will probably want that number on their cars and bikes. So before a new series become available the Jabatan Pengangkutan Jalan (JPJ) will put all the numbers up for auction for a certain period of time, and the highest bidder will get the number they want after the period ends. Minimum bidding prices, made using data from JPJ’s Website. That typo is there to prove that we made the infographic.

Minimum bidding price differs among different categories of numbers: prime value numbers (from 1 to 10) have a minimum reserve price of RM10,000, compared to current numbers (normal numbers that usually no one bids for 😥 ), at a minimum of only RM300. If you’re thinking, “Siao ar, who would bid thousands of ringgit just for a license plate number?“, hi! You must be new here. There’s something sinister about putting a RM520k plate on a RM52k car. Img from AbuAqif’s Blog.

As it turns out… a lot of people. One such group are the ‘number mafias‘, who were said to bid on a lot of popular numbers from JPJ, then resell it at an even higher price to the public. Another way to raise funds from people’s desire to stand out on the road are through vanity plates.

The highest grossing license plate record is a vanity plate

Remember the BAMbee and MALAYSIA plates we spoke about in the intro? Those fall under the category of vanity plates,and they’re the difference between ‘Huh. Sweet.’ and ‘WHAT?! HOW THE FLIPPITY FLOOP DID YOU GET THAT NUMBER?!!?’ “RIMAU” plates were released in commemoration of the recent Sukan SEA. Img from FMT.

Vanity plates are usually commemorative of certain events, used to raise funds for an organization, or a combination of both. In the past, organizations can request JPJ’s permission to give out their own unique numbers, and the JPJ may choose to allow it for a fee (probably RM1 million). The organization then can open their special numbers for bidding, and they’ll get the profits from it to use for their cause or organization for the duration of their deal.

For example, the ‘PERFECT‘ plates were sold by the Table Tennis Association of Malaysia (TTAM) to cover extra expenses when they hosted the Perfect 2016 World Table Tennis Championship. The Ministry of Youth and Sports (KBS) released the ‘RIMAU‘ series to commemorate the last SEA Games, and the Lee Chong Wei Foundation launched the ‘G‘ series to fund programs and associations that support athletes with potential.

There were many other vanity plates out there, like the Pahang’s State Tourism Board ‘VIP‘ plate series, the Kelab Eksplorasi 7 Benua Malaysia’s (KE7B) ‘GT‘ and ‘G1M‘ series, ‘IM4U‘ plates that support the 1Malaysia for Youth movement, ‘T1M‘ plates from the Pertubuhan Transformasi Anak Muda Malaysia… it’s not an endless list, but you’ll probably get bored halfway through it.

Due to their fund-raising purpose and limited nature, a lot of them are generally pricier than normal plates, but perhaps the highest-grossing vanity plate so far is from the ‘PATRIOT’ series. ‘PATRIOT 1‘ was sold for a whopping RM 1,308,000 to a ‘confidential bidder’, and that money went to the Yayasan Patriot Negara (YPN). While it was originally released to fund the organization’s efforts in promoting moderation and patriotism…

Some vanity plates are controversial, and the Transport Ministry is changing that

Hwaaaa so per feck wan. Img from PaulTan.

The JPJ came under criticism for giving out rights to organizations to sell the ‘PATRIOT’, ‘PERFECT‘ and ‘NAAM‘ (of the National Affirmative Action Movement) series, as they were done through direct negotiations instead of the customary open tender process. Also, the organizations were headed by people with political affiliations: The NAAM was founded by M Saravanan, then the Deputy Youth Minister as well as MIC leader, and the YPN headed by Brig-Gen (Rtd) Husainay Hasim, who was Umno executive secretary when Abdullah Ahmad Badawi was Umno president.

In simpler words, there was concern that this practice had been another cash cow for government cronies. As it was said that the JPJ will only approve the issuance of vanity plates on special occasions, some had found it inappropriate for organizations headed by deputies and their ministers to be awarded these rights, especially when Ong Kian Ming had claimed that these privileges were not given to non-politically aligned NGOs back in 2016. 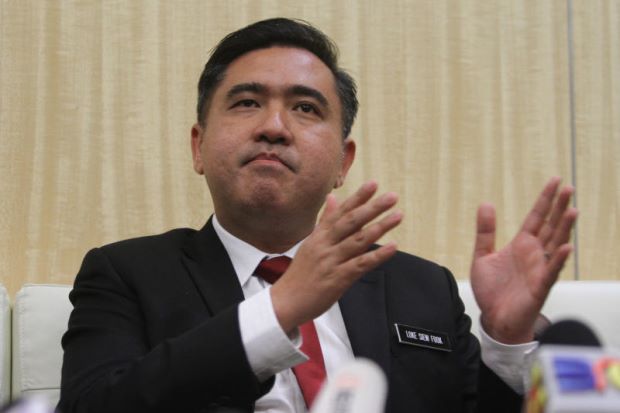 In case y’all haven’t seen the new Transport Minister yet. Img from The Mole.

Perhaps that’s why when Anthony Loke became the new Transport Minister, he had pledged to stop this practice, which he said lets NGOs gain huge profits at the government’s expense.

“I have ordered (the ministry) to stop such practices. Every car plate bidding must go through the Land Transport Department (JPJ)… I noticed (the transport) minister can approve car plate outsourcing but I would not permit that. JPJ cannot make any exemption. Any income from (the sale of) car plates must go to government coffers.” – Anthony Loke, as reported by MalaysiaKini.

But that doesn’t mean that there will be no more vanity plates after this. The government had recognized that license plates can be a good source of revenue (RM280 million last year), so…

The government is now offering fancy new plates to the public! Released in conjunction with the 61st National Day celebration, the bidding process for ‘MALAYSIA‘ plates started on August 1, and it will continue up until noon on August 15. To apply, all you have to do is get an application form for free at any state JPJ office, fill it up, put in half of your bidding amount and send it back. The JPJ has made the form available online.

You can apply for any number in the series except ‘MALAYSIA 2020‘, as it’s reserved for Tun M. JPJ Director-General Shaharuddin Khalid expected the proceeds from the bidding for this series to reach RM20 million, and that money will go into the federal government’s consolidated fund.

“The government needs a higher revenue and when it comes to transport. I, as the minister of transport, can ask the cabinet for more funds if the JPJ can raise more revenue. So, it is a form of cross-subsidy. If we can raise revenue, we can also ask the government to allocate more for transport,” – Anthony Loke, as reported by MalaysiaKini.

If you feel like a ‘MALAYSIA’ plate is kinda meh, you might wanna wait for a while, as the Ministry plans on other vanity plates featuring various states in Malaysia, expected around September or October. If that also didn’t do it for you, they’re also looking at the possibility of introducing personal vanity plates.

“Personalized numbers exist in other countries. We are studying the possibilities of introducing personalized plates, and if possible, we will introduce them in the near future,” – Anthony Loke, as reported by PaulTan.

Yep. People are gonna come up with dirty license plates. And probably pay thousands for those, too.