For most of us, when the subject of “art” is brought up, the first image that comes to mind is something like this: But of course, art goes beyond the child’s drawing of an artists’ frustration at the futility of death and life in the absence of human emotion as in the drawing above. There’s also theatre, music, writing, and all the other stuff none of us can properly appreciate without a beret and a scarf. But thankfully you can buy the art-appreciation outfit set from Ebay! (Click on picture)

Malaysia’s appreciation and approach to art is said to still be immature compared to western countries, with art here being bought as decorations or investment rather than the appreciation of the art itself. On the other hand, there have been local artists who are breaking boundaries by going beyond portraits of kampung girls and seaside landscapes by injecting abstract and symbolic elements in their work. But the question is, have local audiences caught up to these new artistic movements?

Earlier this week, news emerged of an art exhibition called Kenapamu Malaysia by Malaysian artist Vincent Leong in Singapore which has drawn quite a  lot of flak from political parties, NGOs and the public because it depicts what looks like our PM, Sultan, and the Queen from behind. However, there is no official indication of whom these people are. You can witness the ongoing drama in the comments of The Rakyat Post’s FB page here. 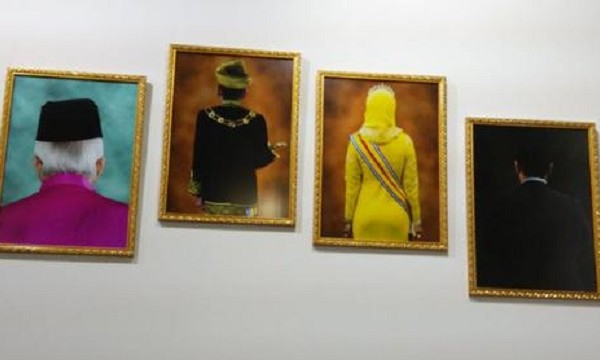 This led us to wonder if there have been any other times where a local artists’ work was considered offensive, so we did a little snooping around…and yes. Here are some other times where local art raised more than just a few eyebrows.

(Cilisos disclaimer: As mentioned art comes in many forms, but we’ll only be focusing on the types of art that’s static and can be put on public display, so, sorry writers, film people, and theatre practitioners. Also thanks to Terence Toh for inspiring this article) 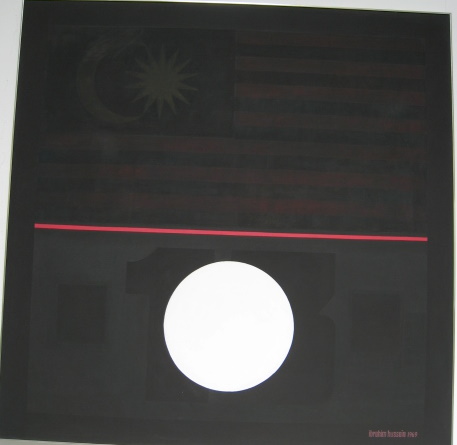 For some strange reason, this seems to be the only picture of award-winning artist Datuk Ibrahim Hussein‘s most controversial work on Google. Also called the “Black Painting,” it’s a torn Malaysian flag which has been painted black, along with a red line and white circle. The flag itself was picked up from the street during the May 13 riots.

When in was displayed in the same year, it generated quite a bit of controversy with calls for his arrest. It took a questioning by Tun Razak to save both him and the artwork:

“To Prime Minister Tun Razak’s questions: ‘Ibrahim, is that a real flag?/ Why did you deface our national flag?’ Ib Hussein explained: black – the darkness represents an eclipse the country was going through; red- the twilight that comes after the eclipse and darkness; white circle – symbolises a new energy and a rebirth” – Excerpt taken from keatsthesunshinegirl.blogspot.com

May 13th is still being displayed today with the condition that it must never be sold or exhibited outside the country. For some reason, Fahmi Reza’s name seemed oddly familiar to us. After some thinking, we recalled that he drew the poster used in the “Solidarity for Azmi Sharom” campaign, used as a feature image in our article on the subject. Both an artist and an activist, Fahmi not only presented the piece as seen in the picture – which spans from the ceiling to the floor with Najib’s eyes blacked out and police tape stretched across – but also accompanied it with a video (click here for video) of an unidentified person stealing it from a billboard. Y’know, hence the title “Najib’s Head Stolen from Billboard”

There was considerable drama involved as it attracted quite a bit of negative attention, particularly from two people who were loudly criticizing the piece and taking pictures. One of them was, apparently, an aide in the Prime Minister’s office. The piece was eventually taken down early by the gallery for “logistical reasons”. You can read the full sequence of events here and follow the discussion on whether or not this piece was actually art in the comments section here. Someone had apparently seen the message to be about a certain Mongolian, apparently. Apparently. Displayed as part of an exhibit for Malaysia Day in 2013, ABC for the Middle-Age Middle Classes is a body of work by prominent local artist Anurenda Jegadeva (popularly known as J. Anu) which spans from A-Z, leading to 26 pieces in total. The “I is for IDIOT” gained the attention of certain quarters with the skull-and-crossbones striped flag, a monkey riding a bicycle, and a Quranic verse, “basmallah” (part of the phrase “In the name of God, the Most Gracious, the Most Merciful”) printed in reverse.

This was interpreted by some pro-UMNO bloggers to be an insult to Islam, with the major points condensed below: This led to the entire series being pulled from the exhibition, I is for IDIOT being confiscated, and the artist facing charges of insulting religion. Tourism and Culture Minister Datuk Seri Mohd. Nazri Aziz, whose ministry ordered the removal of the painting is quoted by The Malay Mail Online as saying that he found the artwork to be “offensive on first look”. These charges were later dropped when it was revealed that the piece was painted four years before and was about the artists’ solidarity with the Iraqi people in the wake of the American invasion of Iraq, which is predominantly Muslim. Also, the Malaysian flag and the American flag are quite similar, don’tcha think?

On the bright side, I is for IDIOT has since been returned and sold for an “undisclosed amount,” which usually means “a lot of money”. You can read J. Anu’s full explanation of the piece here.

NAH, BACA:
Here's how cheap and easy it is to get a fake MyKad in Malaysia “Alksnaabknuaunmo” on the left, “Insert#” on the right. Image from kinitv.com

We lumped these two together since both were finalists in 2014’s Bakat Muda Sezaman (Young Contemporaries), an art competition held at the National Visual Arts Gallery. Alksnaabknuaunmo is described as “testosterone-charged clusters of condom-like neon balloons” in a writeup of the incident by The Star. However, the “ABU = ASHES” text was not originally part of the piece but spray painted on by the artist herself during an interview with the judges. 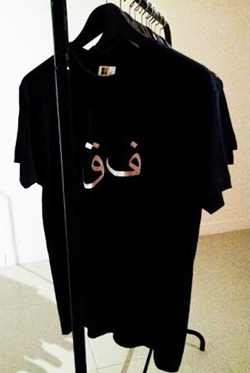 “Insert#” – Image from the Malaysia Chronicle

Insert# is basically a t-shirt with arabic letters hung on a rack. For those who don’t read arabic, the letters are “fa” and “qof“. We’ll give you a moment to let that sink in.

Both entries were removed from display just before the award ceremony officiated by Tourism and Culture Minister Datuk Seri Mohd. Nazri Aziz. This was apparently done by the organizers without the knowledge of the artists nor the judges because of the “distressing effect on some visitors“.

While you might think Alksnaabknuaunmo was removed for possibly sexual imagery, you’re… as wrong as we were. The focus was actually the ABU=ASHES, as ABU has recently been an acronym for Asalkan Bukan UMNO (Anything but UMNO). There’s something else as well that contributes to this reasoning….. but we’ll let you figure it out yourself  😉

Insert# started out as a practical joke, but if you didn’t already get it, try saying “fa qof” very loudly in a public area – preferably with children around. We’re not sure if the people behind the removal of this piece got the joke, but there is speculation that it might have been removed just for the display of Arabic wording. During its time on display, it was already being praised as a study of culture and a reflection of the attitude of urban middle-class young Malay hipsters towards their own culture and tradition. Lithuanian artist Ernest Zacharevic has been putting up several murals across the country, some of which have become very popular attractions for photos and controversy.

Part of a series commissioned by Old Town White Coffee to beautify Ipoh called “Art of Old Town”, this mural on Jalan Tun Sambanthan depicts an old man holding an old school coffee cup painted on the side of an old building. Did we mention old?

The focus of the controversy was over the identity of the uncle, boiling down to three people. Try to take a guess: For some Ipoh residents, the resemblance between the mural and Option A is uncanny. Unfortunately, the person in Option A happened to be exiled Communist Chin Peng. Complaints were raised, with accusations that the mural was subtly introducing or honoring communism back into Malaysia. In any case though, the son of the man who became the basis for the mural (Option C) came forward and clarified the whole matter and the Ipoh City Council issued a similar clarification as well. Option B was a crane operator in a video of the making of the mural who was also thought to be the artists’ model. You can read about the whole affair here.

Why art can be so offensive

Actually, the question should be “What is art?” Art can be most simply described as a representation of reality, thought, or emotion put into a physical form such as paint, words, movement, or sculpture.

So because it’s a representation of thought, it also goes to say that no one agrees with you all of the time; and so there may be those who’ll like a certain painting, some who’ll hate it, and some who’ll be offended by it. Because, after all, most of us can’t tell a Monet from a Magritte, but what we CAN do is to stand around it and offer an opinion.

But of course, there are also artists who aim to offend or at the very least get a reaction out of their audience. Like with Charlie Hebdo for example, the magazine brought across their commentary on society via cartoons that were offensive on purpose. Even in a local – less extreme – context, Insert# artist Izat Arif (the Fa Qof t-shirt one) has stated that he was “proud” that his piece was removed, adding:

“The removal of artwork is also an expression of opinion which I respect because freedom of expression works both ways.” – Izat Arif, via The Malaysian Insider

Are the authorities afraid of art?

We won’t say for certain, but we are quite sure that authorities are at least cautious of the arts. This is because art can be used to spread ideas or incite emotions within the person experiencing it. It can be used by the ruling classes in the form of propaganda posters; or against the ruling classes in the form of (alleged) hidden messages by Renaissance artists secretly rebelling against the Church by painting God as a brain. Read more examples on scienceblogs.com by clicking this picture!

And in Malaysia, we have political cartoonists like Zunar whose tagline is “To Fight Through Cartoon” 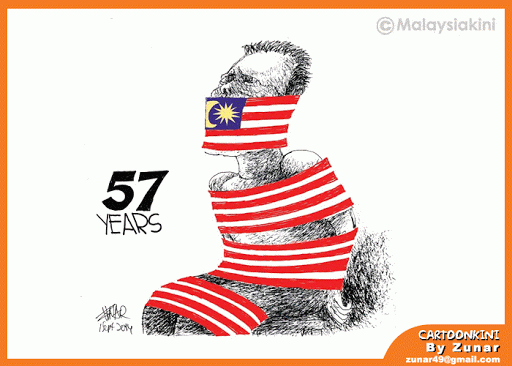 There has been a recent crackdown on the artist (which we covered) with his office being raided again earlier this week.

How we see art is a reflection of ourselves

With art being so subjective, we really can’t say if there’s a right or wrong answer to someone’s interpretation of it. However, it’s in how the person interprets it that’s interesting. There’s a local research paper that attributes our tendency to take things literally to a lack of critical thinking. Another is through how a Rorschach test works, by analyzing how a person puts meaning into a random pattern that has no meaning. We expect someone to get offended by this. Image from Drawception.com

So yea, the funny thing here is how the interpretation is more reflective of the views and personality of the person interpreting it. So maybe you might see that last sentence as a #burn, maybe not. We’ll leave that up to you to decide because it’s something no poll can ever quantify.