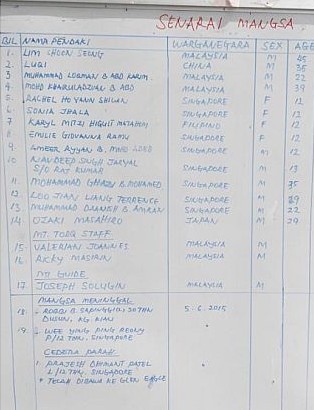 First there was the oarfish that washed up on Redang, as though warning us of an impending tragedy. Then earth quaked in Sabah. While equal parts mind-blown by the fish and sympathetic for the victims, it was only later when we knew the extent of the tragedy.

The damage seemed to have no casualties on land, but it was trouble in the skies as Mount Kinabalu climbers suffered a long, horrific day of rumbling rocks, rain, mudslides, and the most challenging hike back to the base.

While some were rescued, 18 people have been reported dead, including children, with a few more unaccounted for. (As of Monday, 8th June 2015)

Described like a scene out of a movie with boulders as big as houses and cars rolling down the mountain, the escape was far from cinematic bliss as most climbers weren’t prepared for a catastrophe of this sort.

We took a look at some of the narrow escapes by several lucky climbers, who teach us that life is way too precious to be taken granted for.

1. The group who were in the eye of the storm Photo from The Guardian.com (Xihua/Rex Shutterstock)

Imagine having a magical umbrella over you as thunderstorms appear out of nowhere.

Such was the case for 30-year-old Mohammad Razif Hadzri and his six friends. AFP reported that they were halfway through enjoying an astounding view of the Bornean rainforest when they heard a loud, thundering sound which lasted for a while. The terrifying ordeal that happened next made him thank his lucky stars for being alive.

“I saw large rocks, like the size of cars… falling all around us. I also saw landslides around the summit area.” – Razif

As they fell around them, not on them, Razif and his friends were miraculously kept safe and sound. They were also lucky not to be on the trails leading to the summit as the huge landslides had destroyed them.

Razif and his friends were then guided down by the ever-helpful climbing guides, who only reached the mountain’s base 17 hours after the quake struck.

2. The students who were shielded by their teachers’ bodies

Ashley in the arms of her relative. Photo from Arrifin Jama/The New Paper

While rocks flew past Razif, here’s a case where rocks actually fell on a group of climbers. Children, in fact.

Amal Ashley Lim is only 12 years old, but she has already experienced and witness too much for a child. Ashley was among the 29 students and eight teachers from the Tanjung Katong Primary School (Singapore), who were unfortunate enough to find themselves in the face of tragedy.

She recalls completing the trek at about 7.15am when everything started shaking. Soon after, rocks started raining down on her group near the summit. At that point, a brave – and injured – teacher had bundled Ashley and other students under a shallow overhang, protecting them from being hit by the rocks. She could only watch helplessly as some of her schoolmates were terribly struck by falling rocks.

The teacher then took off to look for others but didn’t come back after 15 minutes. By then, Ashley started shouting for help. Fortunately, a guide by the name of James Michael heard her cry and led their group to safety.

Unfortunately, the distraught 12 year old had suffered hypothermia through the ordeal. Despite that, her family is grateful that their baby girl made it down.

“One of the reasons Ashley is alive is because a teacher pushed her under an overhang.” – Ashley’s uncle, Hafiz Ahmad

It wasn’t just this case, though. Real estate agent Hazreen Hussain, 38, told todayonline.com that her daughter was next in line to start trekking, when they heard a thunderous sound. Then, the teachers called for the students to gather before using their bodies to shield the students.

“If you ask me, the teachers are the heroes. From what I heard from the kids, the teachers got up even though they were injured and some even took the blows to cover their students.” – Hazreen Hussain

3. The children who were luckily unwell

For several other students, lethargy had never felt better.

This feeling of sheer tiredness turned out to be a real lifesaving experience for 12-year-old Akshat. And thankfully, it wasn’t just him… 5 other students who were feeling unwell also stayed behind at Pendant Hut on the mountain.

“I told the teacher I didn’t want to go for the trip and went to my bed and slept, and suddenly the earthquake started. Then the tour guide came in and said ‘There’s an earthquake, quickly, go!’ so I ran out with him,” Akshat recounted on Channel News Asia. Together with the other kids who didn’t go trekking, they sped downhill in 3 hours to the Mount Kinabalu base camp where they were safe at last.

“I was one of the luckiest to escape. Lucky, because physically, I am not injured. But I am feeling sad for those who didn’t come home.” – Akshat

NAH, BACA:
Taman Negara may not have existed today, if it weren't for this persistent British hunter

4. The people who avoided the via ferrata route The via feratta route, taken long before the earthquake. It has no protection from falling rocks. Photo from allaboutsabah.com

People usually say stick to the road you know and you’ll be safe. It wasn’t so in the case of Razif Hadri* and his group of 8 climbers. In fact, NOT using the via ferrata at Mount Kinabalu probably saved their lives. A via ferrata (Italian for ‘iron road’) is a mountain route equipped with fixed ladders, cables, and bridges in order to be accessible to climbers and walkers.

“We also heard that a group of climbers who had taken the via ferrata route failed to avoid the falling rocks and had died. But we couldn’t be sure and of course this scared us too. Some were crying but we tried to calm ourselves down and also prayed,” said Razif.

Collin Ng, a 53-year-old events organiser who has climbed the mountain four times also thought the same thing. “When the quake struck, my fear was for those who were doing the Via Ferrata. Some may be caught by the falling rocks where there is no escape for them.” There’s no shelter or vegetation on the rock surface for protection, he added.

5. The men who stopped to smell the roses

Rahimi and his friends. Photo from The Straits Times

That very saying possibly saved Mohd Rahimi Hadzri and his companions, as they took their time to linger on the mountaintop, taking in the view.

“We were the first group to leave Laban Rata for the top and were the last to leave the summit.” – Rahimi told the Malaysian Insider by phone

The Straits Times reported that Rahimi had only stayed at the summit for only 15 minutes, but the decision to leave last meant they would not be at the spot called Sayat Sayat Hut, when the quake struck. Sayat Sayat Hut was pretty much levelled by a rockslide where most of the victims lost their lives.

Rahimi said the seven of them were soon joined by other climbers at the spot while waiting for help to arrive. It was about an 8-hour long wait, but a truly roller coaster ride – one minute they were hearing news that a helicopter would save them, and the next being told that it couldn’t land due to the fog.

Along with the long wait, they were already running out of food and water. This was when the guides told them to walk down the mountain to avoid being hit by any other falling rocks. As they walked past Sayat Sayat Hut, he recalls seeing two bodies: a 12 year old school girl and mountain guide Robbi Sappingi.

He adds that he was lost for words, knowing just how things could have turned out for him and his group if they left the summit minutes earlier. When he returns to Kuala Lumpur, he intends to hold a “kenduri” as thanksgiving for still being alive.

Not everyone was as lucky… Flowers for the children who died. Photo from The Straits Times

While some thank their lucky stars for the making it out alive despite the ordeal, there are those who can do nothing but weep the lost of their loved ones. Should’ve, could’ve, would’ve.

Like this father, who never wanted his little girl to join the trip. Both his wife and himself felt that the climb wasn’t easy, and little Peony Wee had her examinations coming up in two month. But the 12-year-old loved the outdoors so much, and begged her parents until they relented.

If there’s one thing that we’ve learned from this tragedy, it would be that malang truly tidak berbau. (Malay saying for ‘you can’t smell tragedy’). Nobody could’ve expected the quake to happen, and nobody was prepared for it.

So as tragedy can strike at any time, any where – be it on the road, on a plane, on a beach or even in the office – we should all be thankful with the gift of life, and live it to our fullest each and every day.

*Not sure if it’s the same Razif Hadri as #1, but these are the stories CILISOS has compiled across several newspapers