This article was written in May 2016

We use OMG in our titles a lot, and sometimes we abuse the word, but this time we’re not kidding.

For those of you who don’t know, Kerala is a state in India where a lot of the Malayali people in Malaysia come from (this writer’s grandfather included). Kerala appointed a new Chief Minister in 2016, 72 year old Pinarayi Vijayan. He was elected as Chief Minister after the recent Kerala Legislative Assembly election, winning about 58% of the votes for his seat.

But we’re writing this story not because he has some relatives here or he was once a Malaysian, but rather because of this!!! And by this, we mean his face!! Image from Wikipedia.

We’re definitely not the only ones who think so. Before writing this, we found that some blogs said the same thing!! Funny right? First we hire Sammo Hung as our new Bank Negara Governor, and now we find out that our former PM is a Chief Minister in India.

But aside from just being a Tun M doppelganger, it seems that they may have more in common than we realise.

So what other similarities do Tun M and this guy have?

Before we get to the similarities, we do need to point out one really big difference between the two: Mr. Pinarayi Vijayan is actually a communist party member, which is very different from Tun M (whom we assume is capitalist because well, Malaysia is capitalist). In short, Communism isn’t about hiding in the jungles and bombing the gomen, but an idealogy of an economic system where instead of individuals owning things, things would be owned by everyone.

NAH, BACA:
Malaysia is set to launch its first rocket in 2021. And it's not by the govt.

But sometimes you also hear the words socialism and Marxism being associated with Communism. Well that’s because Marxists believe that a capitalist society first becomes a socialist society before becoming a communist society. So they’re connected but just slightly different.

But economic systems aside, they actually have quite a number of things in common: 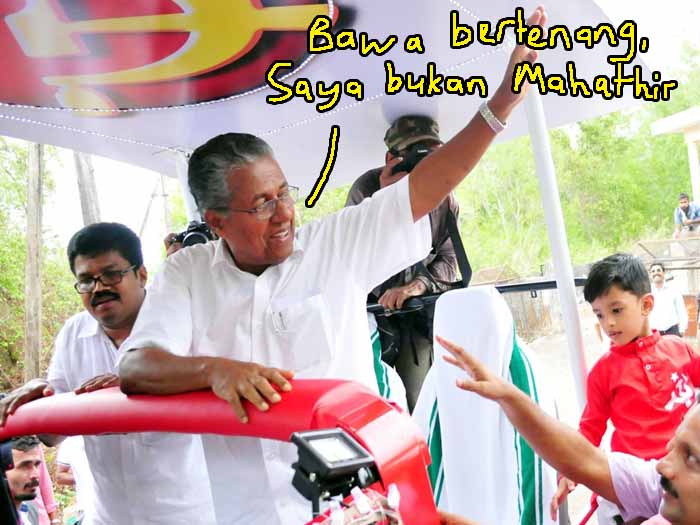 Original image from IANS on newsworldindia.in

OMG, are there more politician lookalikes out there?!

Can you guess which is the Malaysian? Click find out the answer!

First Zeti looking like Queen Elizabeth, then our Sammo Hung governor, and now this! But that can’t be all, we’re pretty sure that they are more of doppelgangers of prominent Malaysians. They just haven’t revealed themselves yet.

So how’s about you help us out? If you know of anyone who looks like (or you think looks like) one of our Malaysian leaders, let us know in the comments below!