With over 130,000 members, as well as the largest number of professionals compared to any other group in Malaysia, the role of our Sikh community in the development of our country is not to be understated. With big names such as Santokh Singh (footballer), Amar Singh (police officer who investigated Najib in the 1MDB case), and of course, the late Karpal Singh (lawyer), Sikhs have contributed to our history in more ways than one:

“This is the Punjabi spirit: we don’t work. We serve. Whatever we do, we do it with passion, drive and love. You don’t call that work. You can pay, that’s by the way.” – Datuk Seri Amar Singh, after retiring from PDRM Datuk Seri Amar Singh (left), who retired from PDRM after 35 years of service. Image from: The Star Online

And their services to our country as Malaysians are not just limited to peacetime; in fact, 33 of the 232 names on our Tugu Negara are Sikh!

But who were the first Sikhs in then-British Malaya, and more importantly, how did those names end up on our Tugu Negara?

… or Nihal Singh, as was his given birth name. As a young boy, Nihal ji started out at his master Baba Bir Singh’s dera (Sikh monastery) as a cook in the dera’s langar (kitchen). He was given the name Bhagvan Singh after being initiated into the almost mythical Order of the Khalsa (or Sikh ‘saint-soldiers’, who several people cite to have been the inspiration behind the Jedi Order in ‘Star Wars’). Even their symbols are similar! (left: Sikh Khanda, right: symbol of Jedi Order).

Like the Jedi, the original Khalsa were not just religious men and women, but also ‘guardians of peace and justice’; Baba Bir Singh’s own dera was said to have been ‘practically a military camp with 1200 musketmen and 3000 horsemen.’

In the mid 1800s, this force would soon be called to action against a new foe: the British Imperialists. After the British Empire seized valuable territory following their victory in the First Sikh-Anglo War, Bhai Maharaj Singh (now the leader of his dera, following the death of Baba Bir Singh) raised the banner of revolt against the British in Lahore, as he felt it was his responsibility:

“Bhai Maharaj Singh led the anti British campaign as part of his moral obligations towards his people and unlike others, he had neither any axe to grind nor any personal score to settle with the Britishers. For him it was a divine mission for which he staked his life.” – ‘The Punjab’s pioneer freedom fighters’, by M.L. Ahluwalia and Kirpal Singh 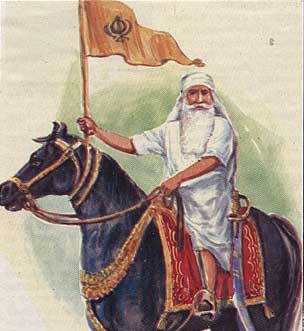 Bhai Maharaj Singh traveled across the Jalandhar Doab, contacting many Sikh leaders to join him in his struggle. Image from: Sikh Siyasat News

Meanwhile, the British planned to destroy the spirit of the Khalsa, whom they saw as a threat to their expansion:

“Every hostile demonstration against us in every portion of the Punjab must be met, encountered and utterly crushed as such a manifestation of the British power was essential not only for the British stay in the Punjab, but also necessary to its continuance throughout India.” – Lord Dalhousie, Governor General of India

After a failed plot by the Sikh Queen Regent, Maharani Jindan Kaur to assassinate the British Resident, the British seized Bhai Maharaj Singh’s property and declared him an outlaw, as they believed he had played a role in it. This move by the British backfired, as it rallied people to the Bhai’s cause, and he soon became the leader of the resistance against the British. Maharani Jindan Kaur. Her mistreatment at the hands of the British angered many Sikhs, including Bhai Maharaj Singh. Image from: History Lessons Nepal

Bhai Maharaj Singh would later fight a series of battles at Ramnagar, Chillianvala, and Ravalpindi, being noted by the British as the only ‘leader of note’ to refuse surrender:

“It would be better if you fight and get martyrdom rather than live a wretched life of a slave.” – Bhai Maharaj Singh

However, the Brits eventually annexed Punjab in 1849, and although Bhai continued to evade capture and wage guerrilla warfare, he was later snitched on, arrested, and imprisoned (along with 21 other Sikhs).

The Brits deemed it too dangerous to put him on trial in India (thanks to his popularity), so they exiled him and his disciple Kharak Singh to Singapore in 1850, making them the first Sikhs to set foot on Malayan soil. There, the Bhai was put into solitary confinement in Outram Jail, where he would go blind from cataracts, develop cancer, and die. Soon, the Brits stopped viewing Sikhs as criminals, and started recruiting them for police work

Although many of the Sikhs being sent to the Straits Settlements were convicts (including the Bhai himself), attitudes of Brits and Sikhs towards each other soon began to cool, with some Sikhs even developing deep loyalty for King and Empire. In 1865 the Brits recruited Sikhs in large numbers in a paramilitary capacity, and they would go on to play a pivotal role in various key events in Malayan history, first earning their stripes in the Larut Wars.

Captain Speedy’s Sikh veterans from the Larut Wars would later be reenlisted as the Resident’s Guard, which would become the foundation for the Perak’s modern police force. Their reputation was such, that later, the other 3 Federated Malay States (Selangor, Negeri Sembilan and Pahang) would also employ Sikhs in large numbers into their respective police forces:

“I was especially pleased with the Sikh police, their skirmishing was excellent and the wrestling after parade gave me an opportunity of observing their fine physique and remarkable litheness.” – Sir Frederick Aloysius Weld, Governor of the Straits Settlements, August 1880 After the Federation Agreement was signed on July 1st 1896, the Malay States Guides was founded as the central Malayan police force, to be headquartered in Taiping (partly due to the large garrison of Sikh police already stationed there). The Malay States Guides would handle crises such as the aftermath of the assassination of J.W.W. Birch, the Selangor Civil War, the Pahang Rebellion, and even served with distinction with the Aden Field Force in WWI!

The cenotaph at the Tugu Negara commemorating the war dead. It includes several Sikh names, including those of the Malay States Guides who died at Aden. Image from: FMT

Although Malaya did not play an active role in WWII, two-thirds of the 86,000 Allied troops in Malaya were Indian, and 60% of that Indian force were Sikh. Their exploits in WWII were legendary; in a battle of 3000 British personnel vs 6000 Japanese, it was said that a Sikh company launched one of the craziest bayonet charges of all time; running through through Japanese mortar and machine gun fire and taking out more than 500 Japanese (with only 30 Sikhs surviving that charge)! Sikh Regiments were also absorbed into the legendary 8th British Army, famous for fighting the Italians in WWII. Image from: Once Upon A Time In War

Our Tugu Negara contains more stories than there are names

You might’ve wondered why most of the names on that plaque are angmoh and bhai. Well that’s because that plaque is to commemorate those that sacrificed themselves during World War I. It’s the other structure (the statues of the soldiers) that commemorates those who died in WWII, as well as an additional 11,000 war dead from the Malayan Emergency, who were mostly local.

From the daring exploits of Sikh soldiers in Malaya, to the brazen tactics of Kapt. Mohana against the Communists during Ops Iblis (1971), and beyond, our Tugu Negara commemorates the tens of thousands who gave their lives for the nation.

Although our heads of state no longer pay tribute on the site of the Tugu Negara itself on Warrior’s Day (due to religious concerns), the stories behind the fallen (both named and unnamed) remain, and serve as a solemn reminder as to the cost of freedom. Reenactment of Ops Iblis, during which its leader Kapt. Mohana was killed. Image from: The Star Online

Whether Malay, Chinese, Indian, Sikh, Asli, Kadazan, Iban, or anything else, every single Malaysian owes our life to the brave souls who died to protect something bigger than them: the country we live in and love to this day.