We all like to think that we’re doing enough to save the environment, such as buying metal straws and using less single-use plastic. In fact, being environmentally-friendly has also driven our local businesses too, with more and more companies churning out green products too.

However, despite the attempt at going green, many species of aquatic life are still at risk. For instance, can you guess how many sharks are culled around the world each year? Now when we ourselves were posed with this question, we didn’t think the number would be 100 MILLION. Yep, 100 million sharks are killed each year by humans, and that’s just the conservative number too as some estimates go as high as a whopping 273 million.

Despite that, when posed with the opportunity to protect more of our fishy friends, Malaysia decided not to.

So here’s a quick rundown on what just happened. There’s this thing called the Convention on International Trade in Endangered Species (CITES), which is one of the oldest international conservation agreements out there. Malaysia has been a party to it since 1977, and as such during the latest meeting of CITES participants in Geneva, Malaysia sent members of the Water, Land and Natural Resources Ministry to the CITES conference that just concluded at the end of August. The CITES conference that happened recently. Image from IISD

At this conference, Mexico proposed that CITES increase the amount of protection for 18 species of sharks and rays which are under threat due to being hunted down for their meat and fins. These species include mako sharks and guitarfishes, which are listed as endangered. Makos in fact have already disappeared from the Mediterranean, while its population are also on the decline in other oceans.

Mexico’s proposal would mean that it would be illegal to trade these 18 species of sharks and rays unless it can be proven that their survival as a species wasn’t harmed in fishing them.

“Mako sharks are highly valued for their meat and fins. Decades of unrestricted overfishing, particularly on the high seas, has led to significant population declines,” – Shark Trust, as quoted by BBC

Now fortunately for the fish, Mexico’s proposal did actually get approved – 102 countries had voted to approve it. However, 40 countries voted against the move, and these nations include China, United States, Iceland, Japan, New Zealand and…. Malaysia.

And now, the Fisheries Dept has responded on why they did so.

So the Fisheries Dept claimed that the types of fishes listed in Mexico’s proposal were not targeted species of fish, but rather are by-catches of fishermen. As such, they state that banning the trade of these fishes won’t do anything to their numbers.

“In this case, the population will not be affected by exploitation and trade of those species,” – Fisheries Dept, as quoted by The Star The Fisheries Dept added that their decision to say no to the proposal came about following opinions from shark experts in South East Asia as well as a recommendation from themselves to the Malaysia contingent at the conference.

“Malaysia’s position not to support the listing of mako sharks, guitarfishes and wedgefishes at the COP18 Cites is based on the views of shark experts in the region as well as recommendations of the Fisheries Department.

The position of Asean countries on the listing was further discussed… In that meeting, the majority of Asean nations decided not to support the proposal,” – Fisheries Dept, as quoted by Malaysiakini

They also explained that not only did most of the countries in the region decided to reject the CITES proposal, but that a host of other countries decided to turn it down too. Furthermore, the Fisheries Dept said that another reason why they can’t support the proposal is that the United Nations’ Food and Agriculture Organisation found that these sharks were not suitable to be protected under CITES as it didn’t mean certain criteria, while there wasn’t enough evidence to approve listing other species such as the guitarfish under CITES protection either. The Fisheries Dept however did note that some of the 18 species could still be put under other programs such as the National Plan of Action for Sharks. “why write so cheong hei when 1 meme explain everything”

Another country that also didn’t approve of this proposal was New Zealand, which led to criticism of the decision in NZ-based media. But for the New Zealand authorities, they too had their reasons for doing so. And their reasons actually seem to be in line with what our own Fisheries Dept had pointed out.

“New Zealand takes a science-based approach to CITES and the position on the shortfin mako shark proposal was formed with advice,” – Eugenie Sage, NZ Conservation Minister, as quoted by Newshub

“This position is also in line with the conclusions of the UN Food and Agriculture Organisation (FAO) Expert Panel and the CITES Secretariat, who independently assess all marine listing proposals at CITES,” – New Zealand Dept of Conservation, as quoted by Newshub

And CITES hasn’t put themselves in good light either at this meeting. While yes, this proposal to protect sharks and rays did indeed get approved, at this same meeting CITES also approved a proposal that allowed hunters to kill more of the endangered black rhino. Countries such as Canada, Zimbabwe, South Africa and the European Union said yes to a plan that increased the number of black rhinos South Africa can allow hunters to kill from five to nine, attracting widespread backlash online.

NAH, BACA:
Wahh so many Msian police uniforms! How to tell them apart?

But back to the topic at hand. If some scientists and even the UN think that it might not be thaaaaat necessary to impose stronger protections for these fishes just yet, what’s the fuss about then? 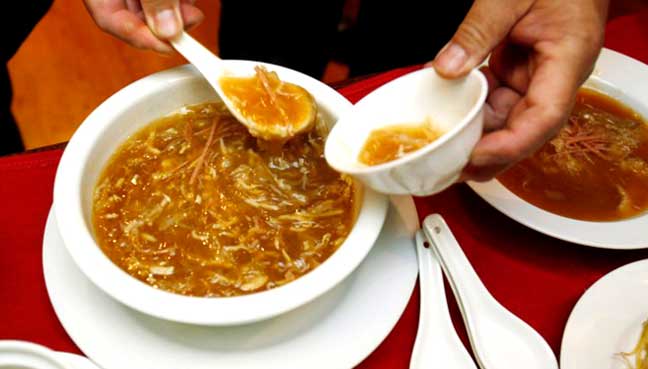 Shark fin soup, as delicious as it might be, threatens shark populations everywhere. Image from FMT

Now as mentioned earlier, one reason behind the Fisheries Dept recommending the Malaysian reps at the CITES conference to reject the proposal is that these types of fish are apparently only by-catches, and not hunted down specifically. So no biggie right?

Well, not exactly. See, the proposal wasn’t actually even aimed at banning the fishing of these 18 species, but rather to increase regulation on trade of these fish to ensure sustainable trade (altho technically you can’t fish it either unless you prove it’s not hurting them, but technicalities la k ¯\_(ツ)_/¯ ). So if Malaysia doesn’t actively target these 18 types of fish, the question now becomes why is Malaysia afraid to ban the trade of these fish. And unfortunately it’s in the trade of these endangered species that Malaysia doesn’t exactly have a good reputation.

Take the mako shark for example. One of the fastest shark species out there, they’re often prized catches as their fins are used in shark fin soup. People also like mako shark meat, as it’s more edible than other shark species. Malaysia meanwhile remains to be one of the biggest trade hubs for shark fins, with a 2017 study by the wildlife trade monitoring NGO Traffic ranking Malaysia as the third largest importer by volume , behind Hong Kong and mainland China. That same study also claims that the second most traded species of shark happens to be the mako shark, the same species Malaysia just voted to not impose heavier trade regulations on.

What are the odds right?

Malaysia also doesn’t have a better reputation when it comes to rays either, as we’re a known major trading partner for both import and export when it comes to rays and skates, together with Singapore and Indonesia. In fact, while we were researching this story, we even came across a news article from last year about Sarawakian fishermen who were selling rays and guitarfish for about RM20 to RM25 a kilo, raking in over a grand per fish. Of course, this trade doesn’t necessarily include any endangered species, and the Traffic study also points out that there were no CITES-listed species traded among these countries when the study was conducted. That being said, with the new proposal already approved, it’s yet to be known if Malaysia’s been trading any of the rays listed in the Mexico proposal.

Nevertheless, it’s not all bad for the sharks in Malaysia. The govt has just recently amended the Fisheries (Control of Endangered Species of Fish) (Amendment) Regulations 2019 to include more types of shark and ray species to be gazetted under our laws. With the new CITES protections coming in too, hopefully this could kickstart an end to the trade of sharks and rays in Malaysia.