If you’ve been catching up with the news lately – or even just within the year – you might have noticed one trend that keeps showing up on your feed: a feud between Parti Keadilan Rakyat (PKR) president Anwar Ibrahim and Economic Affairs Minister Azmin Ali.

Recently, the feud was once again brought into the limelight with the PKR national congress that was held earlier this month in Melaka, when Azmin and his supporters were absent on the second day of congress and criticizing Anwar and co at another event. That side-eye. Image from Malaymail

Azmin used to be a close confidante of Anwar, so much so that he distanced himself from his so-called ‘godfather’ Prime Minister Mahathir Mohamad, and became a founding member of PKR when Anwar was put in jail for alleged sodomy.

However, Azmin was not the only former Anwar supporter. Our friends at SOSCILI found that there are a few more people who have apparently shifted to Team Azmin despite originally being firm supporters of Anwar. And they are… This man is known to be a devoted activist, as well as a filmmaker and a stand-up comedian. Hishamuddin made his name as a staunch activist back in the 1970s. One of his best moments was the Baling Demonstration in 1975, which we wrote about here. And Anwar was also a part of this demonstration.

Anwar was arrested for the first time after the demonstration under the Internal Security Act 1960 (ISA), but Hishamuddin managed to escape the authorities and found political asylum in Belgium. He managed to return after nearly 20 years though, and it was, apparently, thanks to Anwar.

According to PKR veteran Hassan Karim, Hishamuddin’s return was apparently delayed because they had to wait for Anwar to become the Deputy Prime Minister. Immediately after Anwar won the seat in 1993 and took the post, Hishamuddin returned in 1994. And when Anwar was eventually sacked from the government in 1998, a protest movement called Reformasi broke out. Hishamuddin was one of those who went on the ground and called for reforms in Mahathir’s administration. His actions eventually got him detained under the ISA, alongside nine high-profile activists, including Azmin – they’re eventually dubbed the Reformasi 10.

Hishamuddin seemed to have changed his tone in 2017 when he criticized Anwar for his leadership skills as PKR president, which he characterized as the reason for conflicts within PKR. After that, Hishamuddin once again criticized Anwar following the 14th general election for “desiring to become prime minister”.

“Anwar Ibrahim’s desires are overflowing. His desires can be seen at his sleeves. His desires have become the core of Malaysian politics.” – Hishamuddin, translated from Malaysiakini

Hishamuddin also showed up at the Azmin-hosted SPV 2030 dinner, which may have lead to further murmurs that he’s in Team Azmin.

Still, according to Hishamuddin, reformation is not a figure of speech but an idea. And to his credit he has been pursuing political reformation in Malaysia long before Anwar was fired. He insisted that pursuit for reformation should have nothing to do with any specific political figure and has never really fully confirmed that he’s completely aligned in anyone’s camp. Before he became an adviser for Azmin, Khalid Jaafar – or Pak Khalid, as he’s fondly known as – used to be Anwar’s press secretary from the time he was the Education Minister, Finance Minister, and Deputy Prime Minister, until his termination in 1998. He went on to become a founding member of PKR and even took on the role of the party’s press editor until 2004.

Despite failing to become a member of parliament (MP), Khalid has remained active throughout his political career in PKR, even becoming the executive director of Institute for Policy Research, a think tank founded by Anwar to “generate debates and discussions” regarding government policies.

He was then nominated as Azmin’s chief strategy and research officer when Azmin became the Menteri Besar of Selangor, going on to become Azmin’s adviser once he became the Economic Affairs Minister. Khalid’s position in the Anwar-Azmin feud was first seen in July this year, when he advised Anwar to retire from politics and PKR presidency, because Anwar was willing to “[throw] stones at imaginary targets” to become Prime Minister.

“In the run-up to GE14, he was portrayed as the seventh prime minister. After GE14, Anwar is certain to be the eighth prime minister as there is apparently an agreement…

Only an inch left but Anwar is impatient. He worries someone else will overtake him. He throws a stone at his rival.” – Khalid, as quoted by Malaymail

Khalid also wrote a commentary on Malaysiakini, criticizing Anwar for posting photos of him and Mahathir together on his Facebook page as a strategy to get closer to the position, as well as always citing that he “has the numbers” to become Prime Minister.

“Anwar has been sidelined in the news cyle, so he’s building a power transition campaign… And the people are getting dragged into a controversy that could have been solved within Pakatan Harapan.” – Khalid, translated from Malaysiakini As mentioned above, Anwar’s sacking as Deputy Prime Minister by Mahathir initiated a protest movement, the Reformasi, and one of the notable participants was Chua Tian Chang, otherwise known as Tian Chua. Just like Azmin and Hishamuddin, he was one of the Reformasi 10, detained under ISA.

During his time as a protester, Tian Chua could be seen, in photographs, being beaten up, getting arrested, and even sitting cross-legged in front of a water cannon truck in defiance. Tian Chua sitting in front of a water cannon truck during the Reformasi protest movement. Image from The Star

While he was an activist for the Reformasi movement, Tian Chua was also invited to join Parti Keadilan Nasional (PKN), an early incarnation of PKR that was led by our current Deputy Prime Minister and Anwar’s wife, Wan Azizah Wan Ismail. In 2004, PKN merged with Parti Rakyat Malaysia (PRM) to form PKR, and Tian Chua was appointed the Information Chief and then elected the party’s national vice-president.

Tian Chua was one of the frontmen to fight for Anwar’s release from his prison stint for the most part of PKR’s time before the 14th general election. In November 2017, Tian Chua led a solidarity movement marking Anwar’s 1,000th day in prison.

“I was imprisoned for 30 days. That is nothing compared to Anwar’s imprisonment for 1,000 days today. This is a big sacrifice on his part to make sure this country is free from Najib Razak’s grip.” – Tian Chua, as translated from Malaysiadateline However, after PH’s victory in the last election, things seemed to have taken a turn. At the PKR’s national congress, Tian Chua was booed at and even called a traitor when he mentioned Azmin’s name. Undeterred, he called out the party for becoming obsessed with making Anwar the Prime Minister, instead of focusing on more important issues.

“But what is more worrying is our members with an obsessed mentality and showing blind loyalty. And this is down to the members themselves. We will see our members becoming more extreme and obsessed.

This is not about Anwar, because after Anwar, there will always be other prime ministers and party presidents.” – Tian Chua, as quoted by The Sun Daily

In addition, Tian Chua was one of the top leaders who left in the middle of the congress as debaters were slamming Azmin in favor of Anwar. Not only that, he was also present at the SPV 2030 dinner hosted by Azmin. Sivarasa Rasiah has had a long political career. He is the co-founder of Suara Rakyat Malaysia (SUARAM), former vice-president of PKR, Rural Development Deputy Minister, and MP for Sungai Buloh. Before that, he was the MP for Subang.

His political career began in 1997, when he returned from Oxford University and was active in NGO and political activities. He had even been arrested twice during the Reformasi movement, but not under ISA. He subsequently joined Anwar’s legal defense team during the Reformasi era, and also PKR at around the same time, eventually becoming its vice-president for a time.

His efforts as Anwar’s defender eventually paid off, where Anwar received a royal pardon, allowing the PKR president to reenter the political arena. Sivarasa with Nurul Izzah Anwar. Image from The Star

While his defense of Anwar during his imprisonment could have shown that he’s an Anwar supporter, his recent activities seem to suggest otherwise.

For one, Sivarasa expressed support for Mahathir’s decision to not fire Azmin after the sex video scandal, when others have questioned why the Prime Minister had not done so like he did with Anwar back in the day. He also signed a statement with PKR central committee members that hit out at Anwar for suggesting that Azmin should resign for the sex video he was implicated in.

And most recently, Sivarasa was yet another one of those who attended the gathering hosted by Azmin.

The feud might have reached its peak with the congress Both Anwar and Azmin have made statements citing future reconciliation and cooperation and insisting that PKR will not split up. However, with the PKR national congress having come to a close without any signs of agreement between the two, it does not seem like the feud is dying down.

But Malaysians seem to have grown tired of the dispute, having to taken to social media to voice their disappointment. 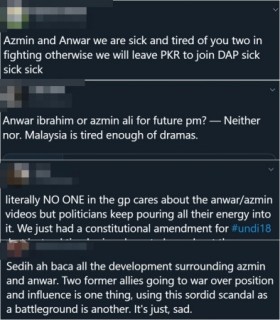 Anwar had, a few days ago, once again called for an end to PKR infighting and urged for the party members to settle their issues through the right channels. But whether or not the feud will let up in the future and what it will mean for PKR as a whole…remains to be seen.

“The rakyat who have placed their trust in us are obviously done with statements of internal party conflicts.

We are duty bound to increase our efforts and performances for the importance of the rakyat and the nation.” – Anwar, as quoted by Malaymail