By this time, most of ugaiz would have at least heard of Jack Ma, the billionaire founder of China’s largest e-commerce group. Even if you didn’t know jack about Jack, you would definitely have come across Alibaba – the company he’s most well-known for – if you’ve ever Googled where you can buy or get something made:

Beyond that, Jack Ma is also noted to be a down-to-earth and popular speaker, sharing his philosophies and rags-to-riches story to audiences around the world. He’s also known to be an avid Tai Chi practitioner, using Tai Chi principles in his management style and having his personal trainer accompany him wherever he goes.

But don’t worry, we haven’t gone the Way of the Buzzfeed and randomly lumped together a generic list in an attempt to keep you inspired for the next hour until the harsh realities of life sets back in. We made this list because the gomen has recently gotten Jack Ma as an advisor to help Malaysia develop its digital economy as part of our current love affair with China. So in this sense, we thought it would be nice to not just look into some of the factors and philosophies that led him on the path to success, but also to see how they can be applied in our local context, since you know, advisor and all. #incaseyoumissedit.

1. You can become rich, but not at the expense of the environment

While you could technically find most products on Alibaba, you’d find ivory, shark fin, and sea turtles missing from the listings after the site decided to ban trade on these three items. After learning how shark fins were harvested, Jack Ma made it a point to stop eating the stuff, which drew the attention of his staff:

My colleagues and staff asked me about it and we exchanged ideas. The young people in my company sat down and discussed it amongst themselves. They came to their own conclusion and said, “Let’s take down this thing.” … I am proud of these young people. They care for the environment more than my generation ever did. – Jack Ma, as quoted by Nature.org

This started Jack’s and Alibaba’s commitment towards giving back to the environment, something he calls “healthy money” – money that’s good not just for themselves but also for society:

“For successful business leaders, if their goal is to be rich, they can become very rich. But then what’s the point of having all that money? When you have 100 million U.S. dollars, I think that’s more than enough for you and your children. Once your net worth exceeds a certain point, that’s not your money anymore. It is society’s money. It is the money society has given to you, and you should take responsibility to allocate the money in a good way. – Jack Ma, as quoted by Nature.org

Since 2009, Alibaba has been putting 0.3% of it’s total revenue to encourage young people to find creative ways to solve the world’s environmental problems (around 2:09 of the video). It’s not a small amount too… Alibaba’s revenue in 2016 is close to US$15 billion, so you do the math la. Since then, he’s also become part of several environmental organizations like the Breakthrough Energy Coalition, The Nature Conservancy, plus pledging US$2.4 billion to a Giving Pledge trust to be used in healthcare, education, and environmental causes in China.

While Jack’s frame of reference is China, the largest polluter in the world, Malaysia isn’t doing too good on the environmental front either. While it’s easy to blame Indonesia for our haze problems, it’s been shown that Malaysian plantations are equally guilty as well, along with deforestation, water pollution, bauxite mining, rampant wildlife smuggling, Lynas, and while we’re at it, destruction of entire mountains for limestone. That mountain is halved from mining, not erosion. Image from WorldTravelServer.

While some of these activities are good for the economy, Jack Ma puts it a little more in perspective:

2. A good command of English is VERY important!

Any Jack Ma talk (or article written about his talks) would always include the section about how he went out of his way to learn English by listening to the radio.

“Since there was no way to learn English at the time – there were no teachers in our city who can teach English so I listened to the BBC and Voice of America, and there every evening 8 o’ clock to 9 o’ clock I open my radio and every Monday, Wednesday and Friday I listened to the VOA and the first book I heard about is The Adventures of Tom Sawyer.” – Jack Ma, quoted from YouTube video by Habits of the Wealthy (1:35 – 2:00).

This is at a time where the Education Ministry had to postpone plans to make English a compulsory passing subject because 25% of students would have automatically failed their SPM in 2015. Now, we can argue till the trains come to Malaysia about mengagungkan Bahasa Penjelajah or whatever but the sheer fact of the matter is that English is still the most accepted medium of communication on an international scale and is a crucial factor for private sector job applications. Unfortunately, some Malaysians have somehow developed a mindset where speaking English is somehow betraying your heritage, whether Chinese, Malay, Indian, or any other ethnicity:

This is also related to our next point, which is…

3. You have to develop thinking skills, not be a katak di bawah tempurung 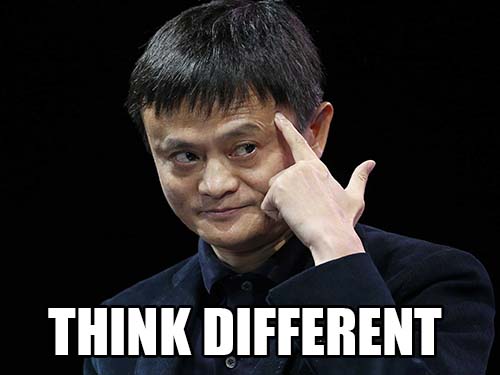 But Jack Ma didn’t stop at English. He also went out of his comfort zone to pick up new ideas and ways of thinking by cycling to a hotel near his home in Hangzhou to offer his services as a free guide to western tourists. In fact, he got the name Jack from one of the tourists he showed around town!

“For 9 years every morning, whether snow, rain, or sun I went there looking for foreign tourists to become a free guide and I made a lot of friends. This trained me in the way of thinking different from the other kids in China in my generation because everything I learnt from the tourists are so different from the things I learnt from life, from school, my parents … so that trained my way of thinking different.” – Jack Ma, quoted from YouTube video by Habits of the Wealthy (0:00 – 1:16).

It’s also somewhat ironic that in an age of open internet and ideals that Malaysians have actually become more insulated since independence, something that PM Najib mentions in his 1Malaysia Roadmap. Worse, we closed ourselves up to… ourselves – segregating into groups driven by race, language, and religion. This, plus an approach to education that values passive learning over critical thinking has reduced our ability to think and question certain decisions or ideas, particularly when it comes from a higher authority:

When people agree to something, normally I take one minute to think “Hmm, Is that true?”. When everyone disagrees, I say take about one minute and think about it, “Hmm, is that true?”. So that was the training. – Jack Ma, quoted from YouTube video by Habits of the Wealthy (1:17 – 1:31).

NAH, BACA:
Is Malaysia's Halal browser any good? We try some lucah sites ;)

4. You don’t need outside help to be a success You might think that Jack Ma’s success might have been due to having some really rich connections or being cushy with government officials, but it’s actually quite the opposite. In his early years, he’s been rejected by Harvard 10 times and turned down in 30 job interviews (including KFC, where he was the only person out of 24 who wasn’t hired), but he soldiered on. In fact, in an op-ed article, he pretty much said that if you’re poor at the age of 35, you have no one to blame but yourself.

“When I was doing my business 15 years ago, nobody supported us. So today we want to build up this infrastructure where if you have ideas, come to our site, working hard, everybody is a fair play game.” – Jack Ma, quoted from YouTube video by Habits of the Wealthy (10:48 – 11:06) Jack Ma with Alibaba staff in the early days. Image from Business Insider.

When Jack Ma started his first internet business before Alibaba, 23 out of the 24 people he asked told him that he was crazy as they didn’t believe the internet existed (This was China in the mid-90’s btw), and when it worked, it was forcibly taken over by the Chinese government. Even today, Jack Ma’s relationship with the government is still pretty grey, with the government-controlled media recently taking potshots at his company. But before the billions, Jack’s hardworkingness and sacrifice was stuff of legend:

“Former colleagues say Ma worked tirelessly, knocking on doors, taking photos, collecting information and translating it into English. When done, he mailed the listings to VBN in Seattle to post on the Web.” – Quoted from Livemint.com

“I went up to the apartment, where they were all working 24/7 … The whole place stank—all those instant noodles. Jack’s ideas were not entirely original—they had been tried in other countries. But he was completely dedicated to making them work in China. I was moved by what I saw.” – Shirley Lin, ex-Goldman Sachs banker, as quoted by Livemint.com

In a way, this is shaped the business philosophy behind Alibaba, larger corporations are rejected in favor of smaller companies looking to reach out to clients through the internet. Alibaba provides the avenue, but what you make of it is entirely up to the blood, sweat, and tears that you put in  😀

This brings us to our own long-debated Malaysian issue of educational and economic policies based on race rather than merit. Stuff like the New Economic Policy has been criticized for being unfair to other races while not actually bringing the full promised benefits tot the Malays. Unfortunately, this is a topic too big to be discussed here, so you can read the pros and cons from businessman and blogger Anas Zubedy instead.

Ironically, freedom of the internet isn’t one of Jack Ma’s visions One thing we have to note is that Jack Ma isn’t only advising Malaysia, but he’s also been confirmed as an e-commerce advisor for Indonesia, business advisor for the UK, and is working very closely with the Thai government on online trade. Considering as well that his entire company is based on users being connected to the internet, Jack Ma is surprisingly supportive of internet censorship and regulation, which some people have called The Great Firewall of China:

“Many people from overseas told me that China might be too tight on Internet control … It’ll be a challenge to humankind if we do not regulate the future development of the Internet systematically.” – Jack Ma, as quoted by Bloomberg Technology

In fact, there was an incident in which a seller was banned from Taobao – China’s version of eBay also owned by Jack Ma – for selling T-shirts depicting Ai Weiwei, an artist that the Chinese government isn’t a fan of.

Whether or not this is a good thing depends on how you view internet regulation and censorship. Along with blocks on sites like Sarawak Report and Medium, the government has been looking into amending the Communications and Multimedia Act to further tighten regulations on what can and cannot be posted on websites and social media; which you can read about here. The proposal is temporarily postponed to a future parliament sitting, but Communications minister Salleh Said Keruak said that it was “very much the intention of the Ministry” to bring these changes to parliament.

But speaking of filtering, some studies have shown that advice is more likely to be taken when it fits in with certain opinions or ideas that the person asking already has, it would be interesting to see what changes Jack Ma would bring to Malaysia’s digital growth. Or at the very least, perhaps some of our officials may benefit from learning how to Taichi  😎