Illegal smuggling of wildlife is not something unheard of, especially in Malaysia. It’s sorta like something that we know is there, but don’t really pay much attention to, at least not until it makes the news, like what happened recently.

A couple of days ago, a mysterious shipment tagged as “cereal” was being brought in through KLIA, and almost made it through before our observant Malaysian Customs detected something sneaky and decided to investigate. What they found was close to RM1 million worth of African ivory (elephant tusks)! Walao. These people so sneaky wan! According to Customs officials, this is already the 9th case this year!

Over the years, Malaysia has seen some…interesting smuggling cases into and out of the country aside from elephant tusks disguised cereals. Here’s 3 we found:

In 2010, a shipment tagged as papayas being imported to Hong Kong was stopped by the Malaysian Customs, allegedly when the papayas began….hissing.

Maybe this was what the smugglers were going for. Comic from Zainorazwan Zainal

Authorities opened the boxes and found 555 cobras, along with 171 turtles, each one believed to be bound for the kitchens of Hong Kong to be turned into delicacies. 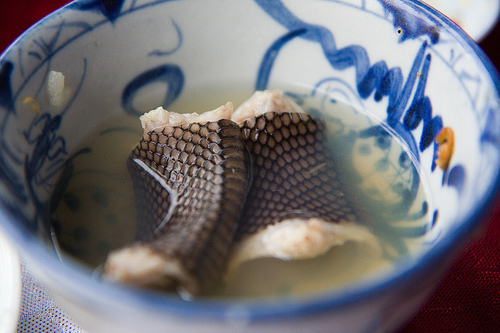 Cobra soup is a delicacy in Hong Kong. Image from http://lazy-lizard-tales.blogspot.my/

2. Turtles and snakes disguised as garlic!

In another case, 800 turtles and 160 snakes were caught trying to be smuggled across the Thai-Malaysian border disguised as a shipment of garlic. The snakes were hidden under approximately 2.3 tonnes of garlic, so that the smell from the reptiles could be masked. Seriously though, the modus operandi for most of these smugglers seem to always have something to do with food. What’s next? Porcupines shipped as cupcakes? Image from http://www.tipjunkie.com/

But perhaps the case that takes the cake (geddit?) belongs to Malaysia’s very own ‘Lizard King’, Anson Wong,who was caught trying to smuggle boa constrictors (snakes) into Malaysia through KLIA. He was eventually busted when his bag containing 95(!) snakes burst open on the luggage conveyer belt, and was sentenced to 5 years in jail.

Woah. Why is Malaysia such an attractive country for wildlife smuggling?

Ok, you know how in Geografi we learned that Malaysia is smack in the middle of West and East, so Selat Melaka was THE place for traders to sell their stuff? Well the same applies to the illegal wildlife trading industry. Like New York is to superhero movie destructions, Malaysia is *the* global hub for animal smuggling, according to NGOs like Traffic, a wildlife trade monitoring organization.

Despite being a member of the Convention on International Trade in Endangered Species (CITES), Malaysia’s illegal wildlife smuggling is still rising, and traders are even beginning to use new methods of business like freakin’ Facebook groups openly advertising the sale of illegal animals. The illegal wildlife trade in Malaysia is at such a high level that Malaysia is one of a supposed few countries referred to as ‘black holes’ of animal laundering. Then there’s the issue of heavy punishment, or the lack of it, as raised by Al Jazeera’s 101 East . For example, Anson Wong (a.k.a. the Lizard King) served only 17 months of his 5-year sentence. He has since been reported to be resuming his illegal wildlife smuggling, an issue which raises questions about Malaysia’s commitment to fighting illegal wildlife trade, as pointed out by Shenaaz Khan of Traffic.

To be fair, the Malaysian government is aware of this issue, and is planning amendments to the Wildlife Conservation Act 2010 to make the punishments more severe, including fines up to RM 1 million and whipping for offenders caught trading illegal animal goods. Hopefully, a more severe punishment will further discourage animal smugglers from their trade. But that’s not all that can be done…

What if people stopped demanding for these stuff?

Illegal wildlife smugglers may be difficult to catch, and making punishments heavier might be an option to scare them, but ya know what might REALLY scare them out of business? Them having no business at all. The illegal wildlife trade is supported by demand, so as long as people keep wanting to have exotic pets, have exotic furniture, or even eat exotic animal body parts, the trade will flourish.

In the past we’ve explored 6 super-gross endangered animals Malaysians eat, and what found is that they are all eaten for their medicinal benefits. Take for example saiga (antelope, critically endangered) horns – poachers illegally hunt them cos there’s big big money in their horns. One batang, which usually weighs about 100g-200g, can fetch up to US$4,600 (or RM17,800)! Some believe that these horns can reduce heatiness in the body, others SWEAR it can ward off evil. If we continue to eat, kill, and threaten endangered animals indiscriminately, pretty soon they’re gonna go extinct altogether. Remember the dodo bird? We also wrote an article about what were to happen if tigers went extinct…

Perhaps the only effective way to put a stop to this in Malaysia is to stop the demand altogether, and that requires all of us. As Traffic’s South East Asia Senior Programme Manager puts it:

“Think before buying. Don’t consume the meat of totally protected or endangered wildlife, don’t buy products and medicines made from these animals, don’t take them home as pets and don’t support places which do all these. When the demand stops, so will the destruction.” – Kanitha Krishnasamy