For those of you who haven’t seen the video yet, we’ve embedded the second part below (Part 1 here)

If you’re wondering how legit this is, a JAKIM official from the family, social and community department has confirmed that they were responsible for the video.

Essentially the video starts with explaining how there are non-heterosexuals among Muslims who see their sexual orientation as a trial from God, suggests how they can overcome it, and a section on dealing with your non-heterosexual friends. On the following day KiniTV featured it, and the video became widespread and sparked the minds of many a Malaysian. Some disagreed with it… …while others see nothing wrong about it, even agreeing with it. But as some would say, you won’t know what a crab tastes like unless you’ve eaten it yourself. So we watched the video and found some pretty interesting things about it, such as…

1. The tone of the video is surprisingly not one of condemnation

The religious authorities of Malaysia have always been known to be extremely against the LGBT community, as evidenced by their propagation of anti-gay pamphlets, talks about ‘handling’ a self-confessed gay engineer a few years back, and raiding a transgender beauty pageant on grounds that it’s against a fatwa. In fact, there were enough raids alone that we could write a whole article about it. So it comes as a nice surprise when this shows up: No torches and pitchforks?

That shot was from the section on “What to do if your friend is an LGBT?”. Some of the suggestions given in the video, for the most part, is quite sensible, especially through Muslim glasses. It’s nothing overly dramatic, like that time they rounded up a group of mak nyah and forced them to go to a rehab camp. No, it’s just essentially being there for your gay friend and helping them out if they want to switch teams.

In fact, throughout the video, the approach was softer than ever before and more of a “Hey, if you’re like, gay or something and want to change for the better, we’re here for you, buddy!” instead of the expected “Sin! Sin! Unclean! Bad! Penghuni Neraka! Boikot!”. It’s more of an offer to help rather than persecuting.

Whether or not this “soft” approach would be effective will be discussed later, but what prompted this change? Perhaps it’s because…

2. They actually read up on the whole LGBT matter

A few minutes into the video, you can see this: Tr: There are among Muslims who have a non-heterosexual orientation.

For starters, notice the choice of words. It’s “non-heterosexual” instead of “homosexuals“. It’s a bit out of character, but upon reading the supplementary pamphlet, it turns out that JAKIM went all-out on research this time. They even admitted that what determines a person’s sexual orientation is still a mystery even to scholars, instead of claiming that you can change it like your phone’s background.

The first part of the contents. So far so good.

The pamphlet itself is quite a read, and it includes detailed explanations on LGBT terms that some of us haven’t even heard of, a couple of slides detailing how a repentant homosexual may think positively about his/her current situation, what to do if a friend of yours is a homosexual, etc. It’s pretty much the detailed form of the video, except for the guidelines on how to handle the rampant accusations of being a traitor or a hypocrite from the pro-LGBT community.

This suggests that JAKIM is now first trying to understand the non-heterosexuals by recognizing that there’s more than just gays, lesbians and transgenders among us, and the issues that they may face if they decide to change. And with these videos and pamphlets, getting us to understand it as well.

However, there might be a small problem with this…

Since homosexuality has not been considered a mental disorder since 1974, it makes proposing methods of treatment a bit of a paradox: how do you plan to cure what isn’t an illness? Afterall, there’s been a history of failed cures for homosexuality, from electroshock therapy (zapping the gay out of you) to straight up lobotomies (removing a part of your brain).

Thankfully, JAKIM isn’t suggesting any of these but they really think that their methods can make a difference. We did some research on their suggestions, starting with… getting married (to a woman). In a study done in 2002 on mixed-orientation marriages (marriages where the spouses’ sexuality is not the same, such as homosexual-heterosexual etc) found that while half the men identified themselves as gay before marriage, that number rose to 85% AFTER they got married. This was because 65% of them didn’t get married because they wanted to cure their homosexuality or fit into society, but because they wanted a family and children – because it seemed like the natural thing to do. This essentially suggests that marriage won’t change sexual-orientation, which is a point to remember in the following paragraph.

NAH, BACA:
OMG, this Malay lady rode around the world alone and was almost stopped by... WIND?!

Even outside that single study, a quick search will reveal numerous stories on gay men marrying a straight woman whose marriages rarely have a happy ending. To be fair, some do fall in love and remained somewhat happily married, but it sounds a bit irresponsible to advise someone to walk down that path. Even though the pamphlet did clarify that the marriage is just to channel the sexual urges in a religiously acceptable way, one might wonder if it’s fair to either the partner or the non-heterosexual in question. Or, if they get that far, the children.

Here’s the other solution that they suggested: 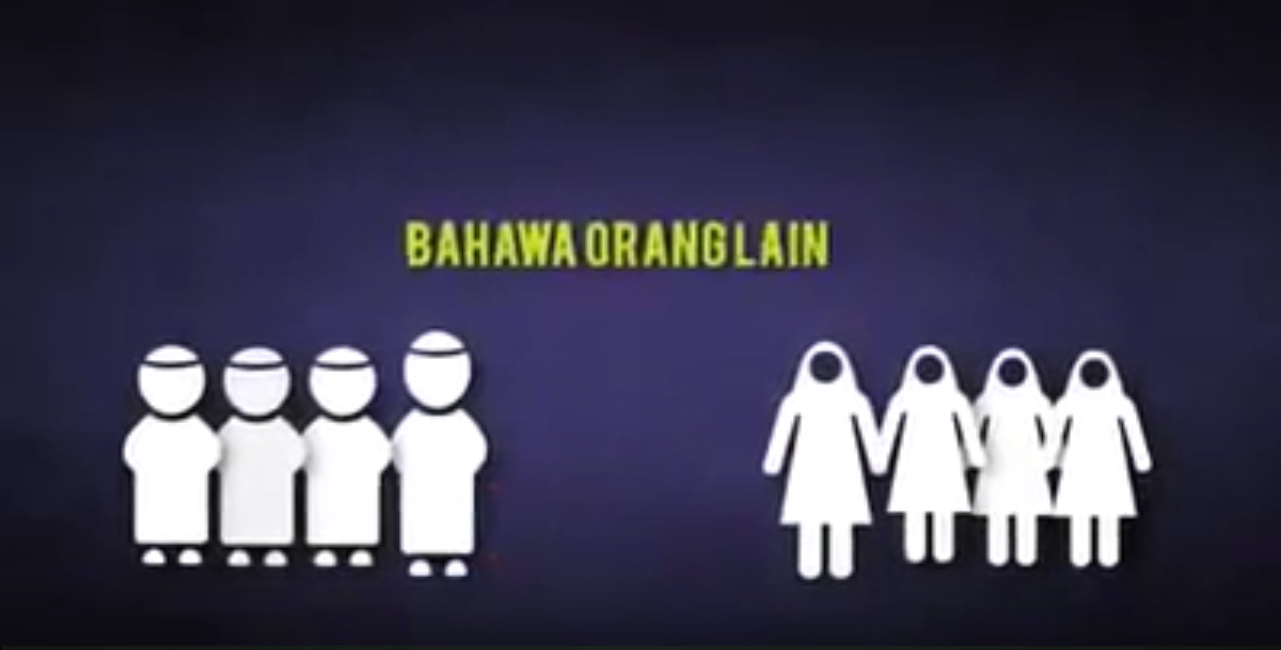 Convincing yourself that other people… For those of you wondering, ‘SSA’ stands for ‘Same-Sex Attraction’. Watching the video, it appears that this point asks the non-heterosexual watching to tell themselves that nobody else is an SSA. To be fair, the context of the JAKIM pamphlet is somewhere along the lines of regularly reassuring yourself that neither you or other people are SSA (aka gay).

While may sound like plain ol’ denial, it could also be some kind of neuro-linguistic programming, which is a bit like a self-hypnotizing technique that only works if you really, really, REALLY believe what you’re telling yourself.

4. Besides the video and pamphlet, there’s also an app to cure homosexuality

Even though the video and pamphlet (probably re)surfaced recently, this app, suggested at the end of the video, has actually been around since July last year. The developer, RAFIQUE SOLUTION, is most probably not affiliated with JAKIM since their app range includes some apps for school, clubs, and blogs, and an ad app for male sexual enhancement products. Therefore it’s pretty safe to say that rather than making up an app for scratch, JAKIM outsourced the app to another company.

For research purposes we downloaded the app, and it’s basically an e-book containing detailed guidelines for anyone who wishes to be straight the Muslim way, and some interactive stuff. The main interface, the questions page, and the chat page.

Pressing the call button seen at the top left of the screen will bring up a map showing their office’s location and an option to call the office through phone, which is a little faster than using Google. We tried to ask a question as a troubled young homosexual through the feedback function, but there’s no response as of the time of this article. The wall, accessed through the third button is basically a chat, and if you think there’s nothing wrong with a chat function, we also have the location button next to the comments button. Tapping it will give us… …a zooming map that shows the exact location of anyone who uses the app. It won’t detect your location if you disable that function, so these people either don’t know how to turn off their GPS or they purposely want their location known. Why an app geared towards curing homosexuality needs these functions is as good as anybody’s guess, but let’s not jump to conclusions here, and stop grinding our teeth thinking about it.

All in all, it’s not quite what one would expect from JAKIM… Or is it? In a way, this a new approach by JAKIM in their efforts towards the Muslim LGBT community. In fact, this is probably the closest they have ever come to being tolerant without breaching what is set down as the guidelines for Islam in Malaysia. They’re still sticking to their views on non-heterosexuals, but they’re not openly condemning them either.

So it seems like what they’re doing now is simply offering help to those who intend to change, with the best solutions they can come up with after balancing what can be done within the religion and what current solutions are being used.

Although the app might require a bit more thought, the video and the pamphlet isn’t altogether too bad – again, if you’re seeing it from a Muslim perspective. It’s available to those who want it, and those who don’t may ignore it completely with no repercussions. While there’s still a bit of room for improvement, but one might say that a little progress in the right direction is better than no progress at all.