Most of us would have heard of local islands like Pulau Tioman, Pulau Pangkor, Pulau Langkawi, how many of us have heard of Pulau Batu Puteh. Well, it’s not a surprise if you haven’t. This island is only about the size of a football field, and the only thing they have going for them is a lighthouse.

The surprising thing about this island however, is the dispute that it has caused between Malaysia and Singapore who are both claiming that Pulau Batu Puteh belongs to them. But what’s even more surprising that this dispute isn’t new, because both countries have been fighting over this island for a few decades now. We apologise if our title indicated that we were fighting over something new.  😛 #clickbait #ihatecilisos 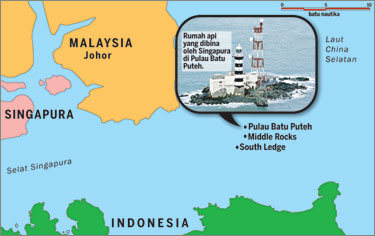 Aside from Pulau Batu Puteh, there’s also 2 other islands in the same region as Pulau Batu Puteh; Batuan Tengah (Middle Rock), and Tubir Selatan (South Ledge), but it seems that only Pulau Batu Puteh ended up being the one involved in this custody battle.

With that in mind, some of you may already be thinking “Why in the world is Malaysia fighting Singapore over a really tiny island?” And that is what we thought as well, but to answer that question, let us get to know this pulau first la.

About 50 years ago, no one gave a damn about the island

So in Singapore, Pulau Batu Puteh is actually known as Pedro Branca (and both names mean the same thing, which is white rock, simply because back in the day the whole place was white from bird poop, we sh*t you not).

The actual history of the island goes back to as far as 1583, with the island being sort of like a Bermuda Triangle for ships in the area. And remember we mentioned a lighthouse? Well, it was built in 1851 by a Captain James Horsburgh to deal with exactly that. 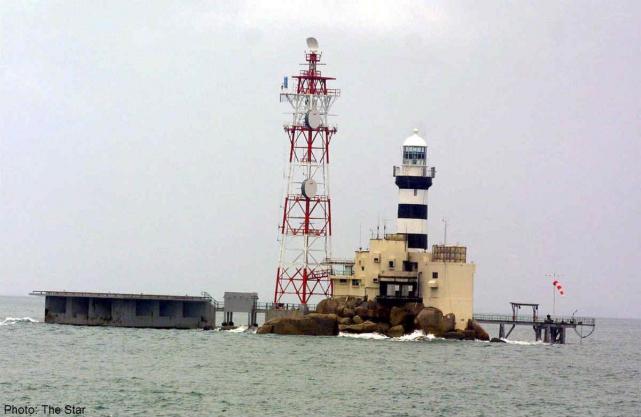 The Horsburgh Lighthouse, named after the man who built it. Image from news.asiaone.com

And for a few decades, no one actually disputed who actually owned the island….until 1979.

So what happened was that back in 1979, Malaysia published a map called Territorial Waters and Continental Shelf Boundaries of Malaysia, which included Pulau Batu Puteh and the other 2 islands in it, which kinda annoyed Singapore. The map that triggered the fight. Image from nas.gov.sg

Singapore claimed that prior to the lighthouse being built, Pulau Batu Puteh was terra nullius (or “nobody’s land” which is just a fancy Latin way of referring to land with no owner). With the lighthouse however, it meant that the British had sort of taken control of it. And for the next 130 years, the lighthouse was maintained and operated by Singapore, so it’s understandable they’re not happy that we suddenly announce it’s ours through a map.

But if that’s the case, why does Malaysia believe they own it?

Well on Malaysia’s side, we believe that it originally belonged to Johor, the Sultan of Johor merely allowed the British the build and manage the lighthouse, not take ownership of the whole island. And like in most disputes that can’t be resolved, this case ended up being brought to court, the International Court of Justice (ICJ) to be exact.

So in 2003 both countries sent their representatives, and a long court battle eventually took place. Sadly….

The court gave Pulau Batu Puteh to Singapore in 2008 So we mentioned that both Malaysia and Singapore had their reason for believing the island was theirs, but what seemed to be the deciding factor in the case was when Singapore produced a letter that the Johor gomen had written to them in 1953 which said that Johor does not claim ownership of Pulau Batu Puteh. Copy of the letter. Image from Wikipedia.

There were other factors that also may have contributed to the defeat: So they got an island and we got a…tiny rock. Image from Astro Awani.

NAH, BACA:
In the 1960s, Tunku invited Israel to a Malayan football tournament. But they never came.

And it looks as if all Malaysia could do was just accept defeat, and we have for almost 10 years, but recently….Malaysia has come forward with new evidence to challenge the court’s decision!

The way the ICJ works is that after a decision is made, a party can appeal to the decision either within 6 months of discovering a new fact, or within 10 years of the judgement. And since the judgement was made in 2008, it’s actually within the 10 year time frame.

In fact, Malaysia has gone to say that the new evidence that they’ve found is strong enough to overturn the ICJ’s verdict. What is the evidence exactly? Well, a few documents, among them a supposed (because it’s not been brought to court yet) telegram where Singapore says they don’t claim ownership of Pulau Batu Puteh, and get this, it’s date is a few years after the letter which Johor claimed they didn’t want the island.

And it seems that the case will be brought back to court because the ICJ has released Malaysia’s application to the public, and Singapore too is already studying Malaysia’s claims. We’re so intent on winning it back that our current AG is gonna lead a 7-men team this time round.

Why in the world do we care so much about these teeny tiny islands?

A document mentions that around 1,500 Malaysian fishermen have registered to catch fish around Pulau Batu Puteh due to it being a “lubuk emas” or goldmine for fish. In fact, they’ve also used the island as a place of shelter during storms, but have been unable to do so ever since this whole thing started (so yes, a few decades now).

Besides that, it’s also a strategic island because it’s located at the eastern entrance of the Selat Melaka, and Selat Melaka is one of the busiest oil trade routes in the world. In fact, one website went as far to suggest that China could be involved (since Pulau Batu Puteh is along the lines of China’s “world domination” route). China’s One Belt One Road plan. Image from chinausfocus.com.

Still, some have also brought up that Malaysia has brought up this issue now as the next General Election could be just around the corner so….

“Such a stance will likely resonate with the Malay voter base, particularly the more nationalistic segment, which will be key to Prime Minister Najib and his Barisan Nasional coalition winning the election and returning to government.” – Mustafa Izzuddin, a Southeast Asian politics researcher at Singapore’s ISEAS-Yusof Ishak Institute, as quoted by South China Morning Post

But another possible reason mentioned is that Johor’s royalty itself is very keen to gain back what it believes belongs to Johor.

And to be fair, we have been fighting for this island for a while now, so perhaps reopening the case may lead to the issue being solved once and for all. But what do ugaiz think?