In the morning of 14 July 2017, we found a post on Wong Chen’s Facebook page about a girl who has been abandoned at a day care centre and suddenly found herself an orphan. According to the post written by Nadirah Sharif, Parliamentary Research Officer at the Kelana Jaya MP’s office, this happened a year ago during Chinese New Year…

“We received a call about a four-year-old child who was abandoned at a day care centre. After contacting her guardian, the child was picked up from the centre only to be left at a random orphanage. As though life decided that wasn’t drama enough, we later found out that the child is stateless.” – Nadirah wrote in the FB post

Aiyo, left alone at a day care centre first, and then when the guardian is contacted to pick the child up, he or she leaves her for good at an orphanage. It’s so heartbreaking for this to happen to any four-year-old. 🙁

But what does it mean that the child is stateless? 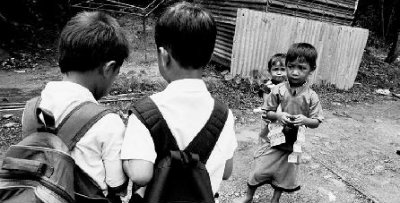 Stateless kids are not allowed to go to public schools. Image from schooladvisor.my

Statelessness is when a person is not recognised as a citizen of any country. It could be that some of them are children of migrants or refugees, some are born to Malaysian parents but abandoned at birth without documentation, some are adopted but cannot trace their birth parents, and some are born to a foreign mother who didn’t register their marriage to their Malaysian spouse, and some are ethnic Indians who are unable to prove that they came here before Malaya’s independence.

But it’s not being stateless ‘just a status’… it can be a lot worse than you think. Often stateless children face a difficult and uncertain future. Here’s what it will mean for that little girl to be stateless in Malaysia: first of all, she will not be able to go to school unlike Malaysian kids who attend public schools for free. So far Kedah is the only state that allows stateless kids to attend public schools. If they’re lucky, those in other states might be able to go to a learning centre set up by NGOs for the children of migrants and refugees.

“It’s totally impossible for an illegal child to be in a government school. The schools that Al Jazeera filmed were not government schools. We are not allowed to use the word ‘school’ either, so they are all ‘learning centres’.” – Keeki, Education Consultant told CILISOS Additionally, stateless children are denied access to public healthcare, they cannot obtain employment, no passport so they also cannot travel out of the country, cannot vote, cannot legally marry and so on.

As of October 2016, there are 290,437 stateless children in Malaysia below the age of 18, said DPM and Home Minister Ahmad Zahid Hamidi. Can you imagine 290,437 kids aaand this four-year-old girl who will not be accepted by Malaysia or by any other country? 🙁 Now that we know of the hardships, can stateless kids actually apply for citizenship?

Apply with the National Registration Department, but if that fails, go to court Families who have adopted stateless children are still waiting on their citizenship application. Images from The Star and Malay Mail Online

Citizenship for the girl can be applied through the National Registration Department (NRD). Click this page to check out the process, T&C and documents needed to apply for citizenship. But if you’ve heard of such applications, you would have heard that it’s no walk in the park.

NAH, BACA:
5 books banned by the Home Ministry because they... "disrupt the public order"?

For example, Alexander Than is an adopted child whose ordeal began when he was 12, when the NRD listed his parents as unknown in a new birth cert. His adoptive parents who have cared for him since birth applied for his citizenship in 2012 after the adoption. Almost two years later however, they received a letter of rejection. He’s now 18 and his lawyers are bringing his case to the Federal Court. More stories of families waiting for their children’s citizenship here and here.

Lawyer Raymond Mah told Malay Mail Online that children could try for citizenship under the Federal Constitution’s Article 15A, through which the Government may register anyone below 21 in special circumstances as it thinks fit. These powers are granted to the Home Minister, whose decisions are also not subject to review. But rejection doesn’t mean the end of the road: Lawyer Annou Xavier said however, the problem lies in the process, explaining that such applications could take 15 to 18 months to even receive a response.

“The home minister reviews cases on a case-to-case basis. If the child has no criminal record or is not a threat to national security, then by virtue of Article 15A read together with the Convention on the Rights of the Child, he must be given citizenship, because Article 15A is specially for child below the age of 21,” Annou argued, referring to the international convention which Malaysia had signed and ratified, and which requires the best interests of the child to be a ‘primary consideration’.

Alternatively, Raymond said stateless kids could try applying for permanent residence, which would allow them some rights denied to stateless individuals, such as to attend public schools, employment, healthcare, opening bank accounts, leaving and re-entering the country, and legally marrying, among others.

Fortunately, there is a Malaysian couple who want to adopt her Pic for illustration purposes only

Wong Chen’s office wanted to try to help the child obtain a Malaysian citizenship, but they needed to find someone who would be willing to adopt her first.

“Adorably, she took a liking to a couple working at the orphanage, who were just as enamoured with her. Abigail, Amir, and our interns were incredibly taken by her too; you can’t help it, she’s really cute!” – wrote Nadirah in the post

CILISOS got in touch with Nadirah, however the adoptive parents were uncomfortable with any sort of news coverage. An ex-intern of Wong Chen’s office had referred the matter to a law firm and two lawyers will be handling the four-year-old’s adoption court application pro bono.

Their office wants to help by getting donations to cover a portion of the fees that may be incurred throughout the case. For legal purposes, the court ordered her prospective adoptive parents to put in an advertisement as proof that the biological parents no longer want the child which will cost RM2,000. So far, the adoptive parents managed to scrounge up an RM700. So they are appealing public to raise the remaining RM1,300.

If anyone is interested in helping this family to adopt the child, you can contact them at 03-56137918 or [email protected].

What it means for this little girl to become a citizen is not just about having basic rights and a sense of belonging to a country… it is also about breaking the cycle of statelessness that would be passed on to her children if she remains an alien.