You know, working for a men’s magazine isn’t any much different from working for any other magazine. Some spend a majority of their time dealing with pets, others are focused more on food, then you’ve got home decor, dudes, fashion and I think there are even magazines that just have midgets in ’em and then there’s my line of work which involves a lot of female models. Something like this but lamer. I mean, tamer. Photo from dailymail.co.uk

Please, for the love of all that is holy, do not go…

“Dude! You’ve got THE best job in the world lah. I only work in oil and gas. You see chicks everyday. How does it feel ah? (how do THEY feel?) YOU’RE SO LUCKY!”

The reality is, I spend possibly, one or two days a month attending photoshoots (and even then, there are instances where I’d have to be absent due to the sheer amount of paperwork I have pending). The rest of my working life for my magazine is spent in front of the computer writing stories, reading e-mails, attending pointless meetings after pointless meetings, brainstorming ideas, kicking anything in sight, editing and being sarcastic.

It IS a great job, yes, but that’s only because I’m passionate about writing and I, like most hormonal males, grew up reading men’s magazines. Today, I’m going to break the stereotype and ruin whatever God-like imagery you may have had on someone who works for a men’s magazine.

Here are the top 5 of the most annoying things people have gotten wrong about working for a men’s magazine, scaling from people who chew loudly to Kanye West:

5. “Your girlfriend must surely hate your job”

My gf not like dis wan. Gif from giphy.com

Well, I’ve got a GPS planted up my butt and when I last got promoted, she got me a chastity cage. Now, each time I go for sexy photoshoots, I just tell my crew that bell-like sound they hear every 10 minutes is my new message tone.

I spend most of my time worrying about the models getting the right facial expression and pose – that, and what to tapao for lunch. My lady’s got other stuff to worry about – like my alcoholism and addiction to fried stuff. And hey, we’re in Malaysia lah. It’s not like our shoots have nudity. Heck, we can’t even show armpits or bellybuttons (something we have to keep explaining to foreign models), so honestly, what’s there to worry about?

4. “Can get me tickets to that… concert/party/event/screening?” So you keep in touch after ages and we’re suddenly siblings anddd you want 5 passes?

The only time I usually hear from long lost acquaintances would be on my birthday and when they want something.

Usually, when the “bro” is spelt with many additional “o’s” (e.g. brooooooo), it’s a sign that they want something and are acting a little more chummy than usual to increase their chances of scoring freebies.

It doesn’t work. Mainly because usually the invites are for media only and even then, they’re often limited to one or two representatives, but even if that wasn’t the case, you’d have to be dumber than Paris Hilton with a concussion to think I’d actually bother accommodating people who have no other reason to keep in touch. Also, I don’t get invitations to every damn event out there lah. I’m an Editor, not a celebrity.

3. “Dei, hook me up with one of the single models lah”

These guys could probably help you out. (Source: Scrubs)

Dei, do I have a fedora cap, a purple and white double-breasted silk coat, alligator leather shoes and a cane? No. Am I walking up to you with a catalogue while saying “Cheap, cheap”? No.

Then that should be some indication that I am in fact, not a pimp. I’m not gonna go around promoting my single friend who lives with his mum, has no job, owns one pair of leather shoes and apparently has no game too. Try Tinder, a club or if you’re really desperate and from Alabama, the next family function. How people think models ask me to be featured (Source: Community)

Well, there was this one girl who volunteered to clean my pipes, but that was a one-off. She worked at Kamelah Tobacco House, and it was because my Winslow pipes had a bad case of resin build up.

What I’m getting at is, NO LAH, BRADER. It doesn’t work that way.

Everyone who has made requests to be featured has done so professionally. I’ve never been asked out on dates, no one’s tried to get me drunk (that could also be because people know I’d enjoy free drinks), and nobody’s even so much as put a hand on my lap or something more subtle like flash at me while holding a sign that reads “TITS FOR THAT”. Disappointed? Well, so am I, damn it!

How models ACTUALLY ask me to be featured 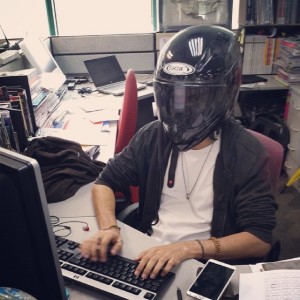 This. This is what I do on a day-to-day basis. And when the helmet comes on, you walk away unless it’s REALLY important

Yes and a judge’s job is pretty easy too also. Just sit there with an ugly wig and slam a hammer repeatedly while saying “Order in the court!” Por favor.

There’s much more to the job than just “looking at girls” and even that aspect is technically wrong. I look at girls and make sure they’re getting the poses and facial expression right, I make sure the photos abide by our (very, very, very reasonable) KDN regulations and at times, I even have to go up there and pose myself so they get a better idea and a good laugh.

And while it is true that my inbox does get filled with photo submissions that makes it impossible for me to stand up spontaneously at times, there’s also a job element to it which requires me to pass the models/photographers our photo guideline, come up with concepts for shoots and of course, drafting out interview questions for the ladies. 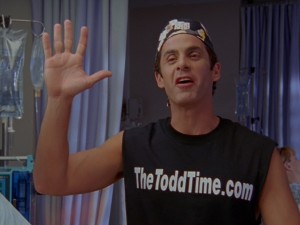 “I’ll show YOU what’s down and up. CYBER HIGH-FIVE!” Anonymoose: Shut up, Todd. (Image: scrubs.wikia.com)

Just one final slap (of reality) to the face…

As much as I would’ve loved to have people assume that I lead an envious career and life filled with girls, private parties and non-existent paperwork, it’s pretty much like any other job out there with its fair share of ups and downs.

But in all seriousness, many interns and writers have joined for only those reasons, and let me tell you this, not one has lasted longer than Kim Kardashian’s marriage to Kanye West. Join because you’re passionate about what you do, the perks should remain just as an added plus for all the hard-work you’ve put in (I swear, Todd if you make a sexual innuendo about “put in”…).

And for those of you who still want to join the industry after this slap of reality, men’s magazines aren’t all about the women. Sure, some may have women on the cover, but take a look inside any male magazine (maybe with a few exceptions), and you’ll find intelligent and witty content on health, fitness, gadgets, entertainment, fashion, inspirational people and stories, personality interviews and generally well-written, quality content that most males would appreciate.

Grab a copy of any magazine the next time you’re at a bookstore and give it a proper read, just to have a better idea of how much hard works goes into producing a single issue.