[Update 19 September 2016: Seems that the management of the Sepang International Circuit may have read this article and realised that they did need to improve the circuit after all!

Not only was the circuit recently closed to upgrade and resurface the track, recently the Sepang International Circuit Sdn Bhd (SIC) announced that they would be investing RM1.13 billion to transform the circuit into a very canggih entertainment hub! According to its CEO, Datuk Ahmad Razlan Ahmad Razali, they are looking to build more hotels, advanced driving facilities, and even a new commercial park!

This upgrade comes at a good time because aside from being really rundown, the circuit also made a loss last year because of our diving Ringgit. And these upgrades would do well to make the Sepang International Circuit a place that many Malaysians would enjoy going to once again.]

[Update 8 April 2017: Well… PM Najib has just announced that Malaysia will stop hosting the F1 in 2018. The decision to terminate the hosting contract was because of “a significant decline of returns” since our first hosting in 1999. More updates can be found here.]

First opened in 1999, our Sepang International Circuit was one of the first in a new generation of modern F1 tracks with cutting edge facilities. However, the problem with the cutting edge is that things usually improve really quickly. So what was cutting edge in 1999, would need some improvements in today’s 2015.

This weekend, our Malaysian GP happens for the 16th time, and you’d think that after 16 years, we’d know how to make things better by now. Unfortunately, very little has changed in Sepang in the last 16 years, and it’s showing. Ticket sales dropped tremendously last year, and eventhough some blamed it on MH370, it was dropping years before. With Sepang’s contract with Formula One not guaranteed for next year, and another F1-ready track planned in Johor’s Iskandar Project in 2016, Sepang definitely needs to get serious.

As an avid F1 fan, this writer has gone to Sepang for at least 8 races, in a variety of different seating areas. So we’ve used all those years of experience (and some Tripadvisor research to back up our opinions) to make a list of things that Sepang should’ve fixed by now. 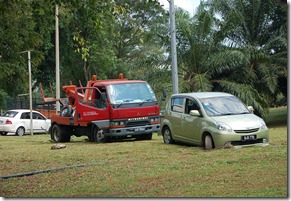 Sometimes, even tow truck get stuck in mud trying to get a car out – Image via  Peepintofashion.blogspot.com

In 2009, the rain was so bad that the race was actually cancelled halfway (which has only happened 4 other times in the history of F1). Seriously, we had one friend who had to leave his car overnight there cos it was stuck in so much mud in 2009. That same year, we saw a tow truck get stuck trying to pull another car out of the carpark. And how much do we pay for this privilege? RM30 per car park pass.

Veteran’s tip: Unless you got paddock passes or a media parking sticker, make sure you don’t drive a car with small tires or low-suspension. Oh and pray it doesn’t rain. Even if you got binoculars you can’t see anything on this. – Image from flickr

Can you see the TV there? Keep in mind, these seats cost anywhere from RM340 all the way to RM1,770 and you can’t even tell what’s going on. Even if you can get close enough, the screen’s resolution is lower than a Nokia 3210.

Sure, you can get a Kangaroo TV, but why pay so much money for so little value? Install a few more screen, and make them bigger. OR, just put the screens closer to the grandstand (maybe ceiling mounted projection? If mamak can, Mokhzani can also!). Also, PLEASE replace the speakers. They’re so broken that even a linguistic expert or a Drive-thru cashier can’t make out what the commentator is saying.

Net effect: no one knows what’s going on during the race. We actually had one incident where my friend messaged me and said “OMG! Kimi is doing so well today!” and we had to reply “Actually, that’s Montoya. Kimi retired on Lap 3.“ Veteran’s Tip: Instead of depending on the speakers, use your mobile phone and tune in to FM90.8 for live commentary (doesn’t even take data OMG).

Shop, Party, Race? Wow… that headline is much inspires. No wonder ticket sales have been dropping every year. And despite prices ranging in the thousands (which is incidentally what most Malaysians earn in a month)…

“But mega events such as Formula 1 has to be strongly supported by locals and without Malaysians filling up the stands, the circuit will look empty on television.” – SIC CEO Razlan Razali, March 2015, Today-Online

Unfortunately, it’s Malaysian F1 veterans who know best that watching it at home on TV is often better than the real thing, so we’d rather not give up half-a-month’s salary just to support the track. Having said that though, we did find these pretty decent F1 ads for the local market from 2011.

And yes, the RM60 seats are pretty sweet (great view as well, but bring your own TV). Veteran’s Tip: Buy a copy of the F1 2014 game and practice the Sepang track. Two weeks before the race (early March), go to any major mall, and play the simulator game to beat all the uncle aunty and score some free tics!

4. Make it more than just a race They’ve got performances all day, we’ve got a printed plastic sheet for white people to point at. Both images from Flickr 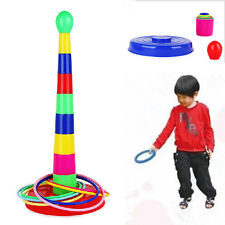 No seriously, ask someone who went last year. This was one of the games at Sepang’s F1 Village, and it wasn’t as pretty as this.

“This is supposed to be a world class venue and a multi million dollar event. It is seriously lacking. The staff are useless and lazy caring nothing about their job or helping visitors. The organization of the event is simply terrible as most things I find in Malaysia. They need to step up their game.” – Imagex, TripAdvisor.

There’s a reason why the Singapore GP sells out six weeks before it starts, and the Malaysian GP gives away free tickets like rainwater. Most Malaysian GP regulars know that in the weeks leading up to the race, there’ll be more opportunities to score free tickets at one of the various in-mall promotions, or at the least, to buy them for cheap on Lowyat or Mudah.my.

Having gone for the Singapore GP two years ago, we can tell you sadly that they do put on one heck of a show. During the day, there are booths everywhere to explore with cool 4D simulators, classic car mini-museums, performances throughout the day, and much better concerts.

Our F1 village by comparison has one or two basic simulators in very hot tented enclosures, and last year we played some awesome games at Sepang including – throwing a ring around a hoop from 6ft to win vouchers -_-. And there were actually people queueing up – cos there was nothing else to do.

And Sepang only announced the Lenny Kravitz cancellation on March 2nd and continued running TV ads (we saw one during the Melbourne GP telecast), even though he was known to have cancelled on February 27th. Tsk tsk.

Veteran’s Tip: Unless you’re buying merchandise, just come for the race. Don’t bother with more than an hour in the village. If you’re heading to Singapore though, go there after lunch (cos food dem ex), and spend a good 4-6 hours before the race. “It is sad to know that a venue known all over the world is so badly managed. The entrance, the seats, the paddock…almost everything is in bad shape. Apart from the racing event, I don’t see other attractions. This place really need to change.”Mohd. Shahrin, Tripadvisor

Broken seats, drops of water from the roof, and little rivers whenever it rains show that outside of the paddocks and corporate suites, Sepang hasn’t really changed much since 1999. Be prepared to get your bum pinched by cracked plastic, and pay thousands of ringgit for the privilege.

Veteran’s Tip: You can’t really see much from the front grandstand (Ruby, Garnet, Crystal, Diamond, Emerald, Jade) except the pitstops and the start (which you’ll always see on the TV). Try the Citrine, Topaz and Tower blocks for great visibility. Actually, if you’re not afraid of getting a little dirty, the Hillstand (RM60) tickets have an amazing view – and you won’t be missing much without grandstand access (see previous point).

But there is a place in Sepang that has EXCELLENT SERVICE and great food, full of colourful characters. Unfortunately, passes are a bit expensive, usually around the RM17,000 a pop mark, depending on the strength of our Ringgit against the Euro. Thankfully though, you’ll get exclusive access to drivers, free champagne and everything is pretty much perfect (if, a little dull). This writer has had the privilege of being in Ferrari’s paddock before, and can tell you it is indeed a great experience, although it’s full of people who have no idea what’s going on except to cheer when Ferrari wins.

Ironically, this is probably where most of the race’s organisers are.

Such a shame though. Cos Sepang really is an awesome track.

If you go through the Tripadvisor entries, one trend seems to pop up alot, which is reviews entitled “Great track, Poor <insert complain>”. True motorsports fans actually love the track, and the races it produces. On that end, it would be truly sad to see Sepang not host next year’s race.

However, the organisers need to realise that a very small percentage of people are true F1 fans that would even appreciate a great circuit. To convert them, you need a great atmosphere, awesome music, and also the right equipment (screens, speakers and a good commentator) to help them understand what makes F1 so appealing for true fans like this writer.

C’mon Sepang. Get cracking and maybe next year, we’ll buy an actual ticket.