For the past week, most of Malaysia barely saw the sun shine. For many days now, we have been experiencing rainy weather and low temperatures as if Elsa herself casted a spell on Malaysia. While it’s much preferred over the blistering heat, several states are unfortunately plagued by serious flooding, causing thousands to evacuate their homes in Pahang, Johor, Penang, and even Sabah.

Although Malaysia is quite lucky to be relatively protected from many forms of natural disasters, we are no strangers to life-taking large scale tragedies. In 1993, Malaysia was shook by the the Highland Towers collapse, the first (and worst) ever incident of a multi storey building collapse since Malaysia achieved independence, and it took the lives of 48 people. In 2004, Malaysia was also struck by tsunamis caused by the Indian Ocean earthquake, only a day after Christmas. Northern areas, especially Langkawi, Penang and Kedah were the main victims of the crushing waves, and the total Malaysian death toll stood at 67. A boat parked on road. Image from astroawani.com

More recently in 2015, Sabah was rocked by a 6.0 Richter scale earthquake, and it devastated the area near Mount Kinabalu. The tremors let loose soil and boulders, causing panic to the villagers living near the foot of the peak. 18 hikers of 5 different nationalities perished, including Malaysian hiking guides who died protecting other climbers. Then of course, there were the numerous plane tragedies.

As heartbreaking as these moments can be, some comfort can be found in the wishful thinking that things could have been worse, especially after you read about these deadly tragedies that happened more than a decade ago.

1. The 1883 dam breach that destroyed the original Kuala Kubu

You’ve heard of Kuala Kubu Bharu, but did you know that it wasn’t the original Kuala Kubu? The original Kuala Kubu was established in the 18th century, by apprentice Malay ore miners who were looking to make a living in the area. As you might remember in your sejarah, the “ancient” technique of small scale ore mining requires you to pan through the rivers in search of residue of precious metals. 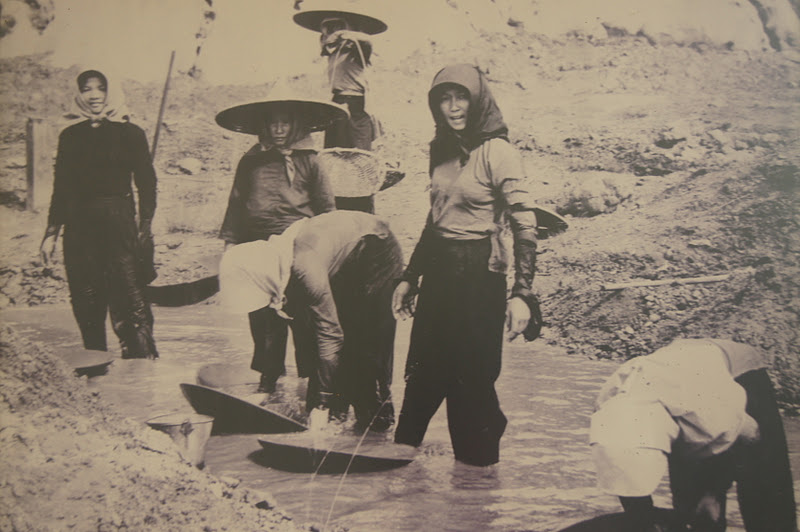 Not Kuala Kubu, but this is what panning looks like. Image from ismailisa.blogspot.my

So, the Kuala Kuburians had to build a dam to reduce the depth of the river. The dam was about 1.6 kilometers long and over 91.4 meters wide, made out of logs of wood and reinforced with the mud and soil from the Sungai Kubu river, which was a branch of Sungai Selangor herself. But Kuala Kubu was a rainy area, so the river was already becoming shallower from the sand and debris being washed down by the rain, and the development brought by mining did not help ease the problem.

On 23rd August 1883, a heavy rained fell on Sungai Selangor, which resulted in massive amounts of water flooding into Sungai Kubu. The dam broke as a result, and the water spilled onto Kuala Kubu and its surrounding area. The dam breach killed 33 people, including some British officials, and destroyed 38 houses.

Leftover artifacts at Kuala Kubu. You could say it was a trainwreck. Image from kosmo.com.my

2. The flood that sent KL into a state of emergency

Old newspaper report of the 1971 flood. Image from The Patriots Facebook.

If you thought flash floods in KL these days were bad, wait until you read about the great KL flood of 1971. Professor Emeritus Datuk Dr. Khoo Kay Kim regarded it as the second worst flood ever in Malaysia. The worst flood actually involved several states and sunk the entire KL, but there are very few records of it because the British didn’t bother to.

Anyway, the 1971 KL flood which happened on January put 50% of KL under water. Tun Abdul Razak Hussein, who was the Prime Minister at the time, had to declare a state of emergency in KL because food supplies to the city was cut off by the flood. He also set up 2 emergency committees to facilitate flood relief efforts around the city. 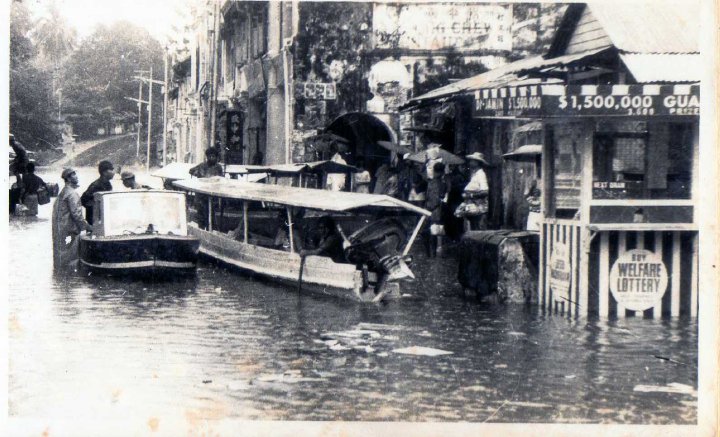 The KL flood. Image from pekhabar.com

The flood persisted for about a week before receding. By that time, 57 people were dead, and it caused up to RM84.7 million worth of property damage. According to Professor Khoo, the flood was caused by the poorer irrigation infrastructure at the time. The silver lining of it was that the Permanent Flood Control Commission was later set up to focus on improving drainage systems in main cities and study flood warning system.

NAH, BACA:
For many years, Kelantan made its own gold coins and promoted it as real money

3. The jetty collapse that injured 1,700 people

Part of the jetty collapse. Image from tankiasu.wordpress.com

On the 3rd of July 1988, 2 separate festivals drew the attention of the masses to Penang. Georgetown was holding a rare Kwan Yin festival, and the Church of St.Anne was celebrating an anniversary in Bukit Mertajam. Locals, and even tourists from Singapore, Hong Kong, and Taiwan were congregating in Penang, and the Penang bridge was off limits at the time in fear of a disastrous traffic jam.

So for those who wished to visit the island, the ferry service was the only alternative left for them. This sent everyone to the Sultan Abdul Halim ferry terminal (build in 1965), and the throng of patrons present at the time was estimated to be more than 10,000 people. The massive crowd of people forced the port authorities to close off some entrances in an attempt to control the crowd, but it proved too much for them.

Colourised photo of the scene. Image from tankiasu.wordpress.com

The 5 meter tall jetty platform gave way to the stress from to the influx of visitors, and collapsed without warning. Thousands of passengers were caught in the collapsed, and some of those who were in the middle of boarding their ferries fell into the sea, while the rubble went crashing down on them at the same time. In the end, 32 people were killed, with almost 1,700 others injured.

4. The deadliest mudslide in Malaysian history

The Orang Asli village of Pos Dipang was started in 1978, with about 60 houses and a population of 1,500 people. Being a rural inland village in Kampar, the villagers there mostly depended on fruit orchards as their source of income. Around 6pm on 29th August 1996, villagers heard a loud rumbling noise, and a landslide of mud and water came rolling down on Pos Dipang.

The mudslide carrying away houses. Image from bhrian.com.my

The torrent of mud and water carried houses as far as 9 km away, and swept them into a river downstream. Some 30 huts were swept away by the mud, killing 44 people, and some of the bodies were never found.

The incident, which is said to be the deadliest mudslide in Malaysia, was widely blamed on widespread logging activities that were happening nearby, but the locals accepted the tragedy as god’s wrath. Their new settlement was constructed not far from the disaster site.

5. The storm that killed almost as many people as everything mentioned in this article

Tropical storm Greg hit Sabah with strong winds and floods in 1996, on the same date the Indian Ocean earthquake tsunamis hit Malaysia. The coverage of the storm was huge, affecting many areas from Kota Kinabalu to Tuaran to Papar. The storm had actually just passed and missed the coast of Sabah, but after getting close to another storm it turned back and headed towards Sabah.

With windspeed of up to 50km per hour, it destroyed hundreds of homes, caused RM150 million worth of damage, and killed 238 people in total, with over 100 people still unaccounted for up till 2017. We added all the other casualties in the article, including the ones mentioned at the beginning, and it came up to 299. The storm also left about 7,600 people homeless, and is considered one of the worst natural disasters in Malaysia. 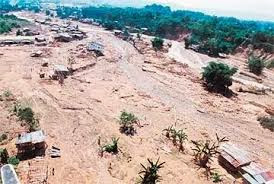 Most of the photos of the storm were too grainy. This is the best shot. Image from wrnob.blogspot.my.

One factor contributing to the severity of the disaster was the fact that heavy rains were already battering some of the areas before the destruction of the storm. Without the local’s knowledge, a large body of water had already accumulated in the peak areas of Bukit Kimanis, which overlooked many of the areas affected. The storm then caused the water to spill into rivers nearby, and made for even worse flooding.

“At first, the water levels rose and fell without warning. Later, a second surge of water came, carrying with it rocks and logs of wood.” – quoted from Utusan

Though we can’t predict every tragedy, we can at least prepare for it

As far as we could find, the floods developing right now has claimed a few lives so far. Just a few months ago, the northern states Penang and Kedah was hit by one of the worst floods it ever saw, but thankfully less than 10 deaths were reported, though a few thousand people were forced to evacuate from their homes. No doubt, the modern drainage of today would have lessen the impact as compared to decades ago, but if it wasn’t also for the response and aid from the authorities (and Malaysians around the country), things could have probably been much worse. I don’t want to say I told you so, but I TOLD YOU SO. Screenshot from kinitv.com

Around Malaysia, Disaster warning systems were also put in place, for natural disasters such as floods and tsunamis. In fact, the Malaysia National Tsunami Early Warning System (MNTWES) was the first detection system ever introduced by the Malaysian Meteorological Department. But more than reacting to disasters, maybe there needs to be more attention can be placed into preventing them from happening in the first place. As a few cases above show, the cause and effect of unchecked development can certainly turn deadly, and with so many mega projects planned, who knows what unsuspecting impact would befall Malaysians then.