This little 7-year-old girl broke hearts when a photo of her waiting by a school gate made the rounds. Darshana from Seremban could only watch outside the grounds in her uniform, because this is as far as she was allowed to go, while other children went into their classes at the start of the school year. That’s because Darshana, who is adopted, is registered as bukan warganegara, and is not permitted to enrol in any government school.

Her adoptive mother V. Malliga, related how Darshana woke early every day and insist that she send her to school.

“When she sees other children going to school, she will cry and ask why she is unable to. She would also stare at her school uniform and other schooling items.” – V. Malliga, The Star

Her parents can’t afford to send Darshana to a private school either. “How are we to get her a passport when we have no idea who or where her parents are?” asked her dad Ganesan, a lorry driver. The couple, who went through three miscarriages over the past 11 years, badly wanted a child. When a friend alerted them that a baby girl had been put up for adoption, they jumped at the chance and adopted Darshana.

There are many other kids who suffer the same plight as Darshana – The Sun Daily reported that there are nearly 300,000 stateless children in the country. But the problem was exacerbated last year when… H’ng (a parent) showing the circular. Img from The Sun Daily

Thanks to the new circular, Darshana and other kids have had trouble enrolling. One of them is 7-year-old H’ng Mei Qi (pictured above with her dad), who was born in Chiang Mai, Thailand to a Malaysian father and Thai mother. She was initially not able to start school this year, but with the intervention of a political party, she was later accepted. 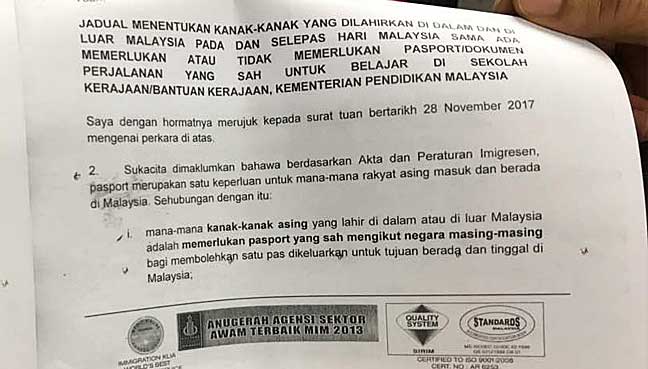 Pic of the circular. Img from FMT

Seven other kids knocked on the Penang Education Department’s door to plead with the authorities for a placing. They were there after consulting with PKR’s National Stateless Programme Coordinator Kumaresan Arumugam. He said not being able to start school is one thing, but there are those who are told to stop halfway, such as the case of a 10-year-old known as ‘Ah Mei’ and three Penang-born siblings. Family of the 3 Penang siblings asking to be let back into school. Img from Malay Mail

For example, Ah Mei was already attending a government primary school in Kulai, Johor the past three years, when she was forced to disrupt her education after she couldn’t produce a passport. This girl was born in Malaysia, before her Malaysian father and Indonesian mother had formally registered their marriage, so she doesn’t have an IC. The family brought their problem to Kulai MP Teo Nie Ching.

After the media highlighted Darshana’s case, MoE stepped in to help After The Star highlighted poor Darshana’s case, the Education Ministry stepped in to help her by giving her a special pass which would allow her to enrol into Standard 1 at SK Taman Rasah Jaya. Wheewww! Darshana finally gets to go to school

“Darshana will start school on Thursday (11 Jan). The Ministry has looked into her case and we decided to give her permission to be enrolled into one of our schools.” – source from the Education Ministry, The Star

And not sure if you guys remember the case of Tan Yao Chun (pic above) from Changlun, Kedah, who couldn’t join Standard 1 last year because he didn’t have a birth cert. His Malaysian father went missing for many months, causing his Myanmar mother to give her newborn to his grandmother, Rose Mary Chin, 77, who raised him from infancy.

The New Straits Times front-paged his heartbreaking story and photos, prompting Kedah Menteri Besar Ahmad Bashah Md Hanipah to intervene on all stateless kids’ behalf and permit them to enter public schools. Yao Chun was thrilled to put on his uniform and join his friends in Standard 2 this year!

This is happy news indeed! But… what about the kids whose cases don’t get public attention?

As CILISOS made clear in previous articles, stateless kids do not have access to education in this country. ‘Statelessness’ doesn’t just apply to foreigners ONLY. It includes those who are:

Heck, in either scenario, these children may have been born in Malaysia to Malaysian parents, yet, for as long as they do not have the black & white to prove it, they cannot be recognised as citizens by the National Registration Department.

You wouldn’t believe the things some kids would do to get an education, like this Sabah-born boy who snuck across the border to Indonesia, because a school here wouldn’t be able to accept him. And who could forget Snowflake boy, who took the internet by storm, after the 10-year-old’s teacher uploaded a photo of the icicle-covered pupil. The kid from Yunnan he walks 4.5km in the harsh winter every day to get to school! 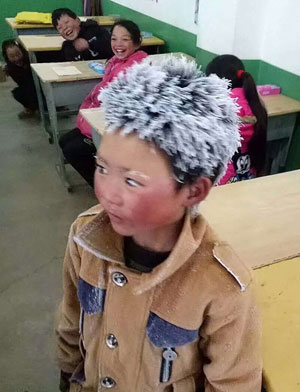 Though our country has ratified (approved) the Convention on the Rights of the Child (CRC), which would bind us to it by international law… it should be noted that we have stated five reservations (meaning the Government disagrees with these 5 things) – one of ’em is Article 28(1)(a) on free and compulsory education at primary level.

But then who can help them?

Thankfully, the Home Ministry has just allowed stateless kids to go to school On 11 Jan, the Deputy Home Minister Ahmad Zahid Hamidi gave stateless kids a blanket approval to go to school, provided their citizenship applications have been submitted.

Manager of the Special Implementation Task Force at the Prime Minister’s Department, G.K. Anandan said they were in the midst of officiating stuff, trying to work on a permanent solution. It could take some time since it involves several government agencies, Immigration, National Registration and MoE, said Anandan.

“These children have the right to pursue their education while the application is being processed. If there are schools that do not accept them, their parents or the guardians can refer their case to the district education offices or the ministry.” – DPM Zahid Hamidi, NST

Even Pinocchio could go… and he’s not a real boy!!