HEY! Did ugaiz know there’s an ASEAN Dengue Day? And did you know it’s TODAY? Yup, it’s gonna involve the 10 ASEAN member countries and will be hosted by the Philippines this year. Unfortunately, no public holiday for this so, sorry. So in case you didn’t know, ASEAN Dengue Day is an annual event with just one objective in mind: To break dengue™. It involves the raising of awareness, cooperation, and commitment among governments, NGOs, pharmaceutical companies, and individuals to combat the virus.

True to this commitment, we were invited to attend a Dengue Workshop organized by pharmaceutical company Sanofi Pasteur to drum up awareness on Dengue earlier this month because, despite everyone’s best efforts, dengue cases are still on the rise.

You’d think that with modern medicine and improved lifestyles the rates of dengue would be dropping right? Well, takey a lookey to be mind-blowny:

Worldwide dengue cases have increased by 30 times over the past 50 years!!!

So what’s going on? Why is the situation getting worse? Are people being misinformed?

Well, we thought that was the case when we published an article debunking dengue myths last year, but after a particularly interesting presentation during the workshop, we realized that the issue wasn’t that people didn’t know about Dengue –

The issue is because people have read so much about Dengue that they’ve become desensitized to it.

(Which is why you were probably already yawning while reading the first few paragraphs of our intro. Don’t lie.)

See, Malaysians have been exposed to so many PSAs, workshops, and “Share this dengue cure with people you love” messages that they think they understand the virus well enough to assess their risk of contracting dengue fever and/or to hold on to outdated or inaccurate information which may not help.

The following are based on the findings of an online survey of 500 Malaysians and 12 in-depth interviews by market research company Ipsos (Not related to CILISOS) commissioned by Sanofi Pasteur. Unfortunately, we couldn’t find a copy of this study online, so we’ll be putting pictures where needed. Looking through their results, here’s what we realized:

*All pictures of results are credited to Ipsos and Sanofi Pasteur

1. 62% of Malaysians DON’T see dengue as a life-threatening disease.

Summary: While 76% of the respondents considered dengue to be a serious disease, it’s still seen as less life-threatening compared to cancer and HIV Question: From this list, please indicate how severe these diseases are using a scale of 1-5.

From a list of diseases such as cancer and HIV, dengue was judged to be less life threatening but also the most contractable. In fact, 76% of the respondents considered themselves at risk of contracting dengue and 11% at “high risk”. Question: “Do you believe you are at risk of catching the following diseases?” (Click to enlarge)

This isn’t exactly an apples-to-apples comparison but there were 37,400 new cancer cases and 21,700 cancer-related deaths in 2012.

Yes, the stats aren’t in the same time period, and the death rates aren’t comparable because a person can live for years with cancer while dengue fever patients can succumb to the disease in a matter of days, but the point here is that the actual numbers of dengue cases might be much higher due to the fact that the teruk dengue fever you kena is the second (or more) time that you’ve had it. Most dengue first timers may not even know that they have it because the body fights it off really well.

We figure it’s due to what we read about cancer and the low survival rates versus the impression that you can be easily cured from dengue:

“It’s not fatal upon infection. You can take a lot of preventive measures. … From what I see, only 1 out of 10 is really severe. The rest has recovered.” – Survey respondent, quoted in Ipsos dengue report. …while cancer may develop due to any number of environmental or genetic factors which can largely be out of your control (like how non-smokers may end up developing lung cancer). So while it’s great that Malaysians are beginning to view dengue more seriously, we can only hope this would continue since…

2. 96% of Malaysians CLAIM to be knowledgable about dengue

Summary: A majority of Malaysians claim to have at least an average awareness of dengue, with their knowledge of it increasing in the last 5 years. However, there might be a catch… 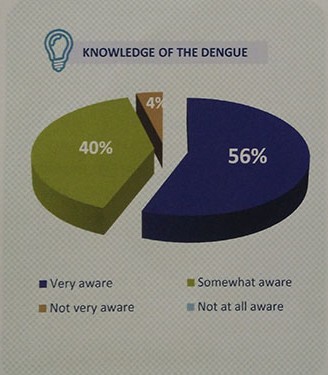 Question: How aware are you of dengue?

Considering how dengue cases so common nowadays, it might not come as a surprise that most people would be able to express some form of knowledge by now.

With so many cases happening and the increased media coverage on the subject most Malaysians would have been exposed to the information either indirectly or have actively gone to look for ways to prevent or cure it. This is further reinforced by the fact that 86% of Malaysians have learned more about dengue over the past 5 years. However, and this is a big “however” here, the sources of this knowledge may not always be accurate because…

3. 62% of Malaysians get their info from non-professional sources.

Summary: Malaysians are able to identify proper sources of information but still prefer to listen to family and friends.

So here’s a bit of an odd finding… the top 5 “good” sources of dengue information identified by the survey respondents are the Ministry of Health, Hospitals, TV news, Clinics, and Newspapers- perfectly valid sources of credible information. However, when it came to actually getting the information, most Malaysians still relied on family, friends, and…. classmates of teachers at school? 😕  (We assume it was a typo and they meant “or”) Question: When it comes to healthcare, whether you are in good health or not, where do you get information? (Click for full picture)

While we suppose this is quite common with mobile messaging, social media, and even chats in person (do people still do that??), the fact of the matter is that not all this information is accurate or sometimes even outrightly false. Let us present to you the (sigh) papaya leaf “cure”. The news that papaya leaves are a cure is common enough that many participants in the workshop actually forwarded that question to the presenters (a professor and an associate professor) – but the fact that the presenters totally left this “miracle cure” out of their slideshows only points to one answer: So yea, linking back to point No. 2, while knowledge might have increased in quantity, the quality of this knowledge is still fairly debatable.

P.S.: The reply to the papaya leaf question was “Some research has been done but until there’s extensive research, nothing’s concluded. But any home remedy that doesn’t bring harm, it should be fine.”  🙄

4. 79% of Malaysians don’t see the government doing anything useful to stop dengue.

Summary: The gomen is perceived to be doing more awareness campaigns than actual work. Question: In the past 6 months, what, if anything, has the government/local authorities done about dengue?

Wait, people are contracting dengue everywhere and the government are only doing awareness campaigns?? No wonder they’re getting so much flack for not being able to control the dengue issue la!

Umm… but the government might actually be doing the right thing here. As with the angle of this workshop as well as the approach for ASEAN Dengue Day, the key word here is Awareness. And Information. Two. We mean, two keywords. Yeah.

Here’s the logic behind this – there is only so much the authorities can do if the rakyat doesn’t chip in to help. Take fogging for instance… You could spray an FRU truck full of fogging pesticides at a house but it won’t do any good if the residents close their windows and doors because the mosquitoes are more likely to be inside the house. The same goes with cleaning drains or dumps… it won’t do much good when people still throw drink containers out their cars or by the pavement because these collect water and become breeding grounds.

This also makes further sense when you consider the next point…

5. 43% of Malaysians see themselves as Batman in the fight against Dengue Question: Who do you think is responsible for fighting dengue?

In our previous dengue article (bet you’re tired of hearing that word now, eh?) we pushed for neighborhood cleanup groups, aka the gotong-royong, which, aside from being the fastest way to get stuff cleaned, is probably the best way to instill a sense of community and shared knowledge.

However, we may have overlooked the fact that people, especially city-dwellers, have gotten a lot more private and individualistic compared to the more communal society which our parents grew up in so it’s probably natural that, like Batman and crime, most respondents would not only rely on themselves to fight against dengue, but also as the first line of defense against it.

So in this sense, while a good ol’ gotong-royong would still be most effective, the respondents’ personal measures of clearing still water (72%) and using mosquito repellent (65%) would still help in lowering the dengue risk. The only condition here is that each person has to take the personal responsibility of doing their part and keeping tabs on others around them. After all, it won’t do you much good if you’re constantly emptying water containers while your neighbor keeps an empty bottle collection in his garden.

Eh, these stats reliable or not wan? Can represent all Malaysians meh?

Y’know, we were asking the same questions ourselves. A couple of things immediately came to mind, such as the comparatively small sample size (500 online, 12 in-depth interview), that the research was limited to Peninsula Malaysia, etc etc. Thank you Research Methods class.

But while all this is debatable, what isn’t is the fact that dengue cases have more than tripled from 2013 to 2014 (and still increasing today) and almost one Malaysian has died from dengue fever each day from January to May this year (138 deaths ÷151 days = 0.91). And these are really scary statistics.

Sure, a vaccine might be available in the near future with Sanofi Pasteur already beginning clinical trials in Malaysia but that’s still prior to approval from the Ministry of Health and, again, it’s still in trial phase so there’s no telling when we’ll be getting it – if at all. So for now, we’ll still have to work together (or alone, whatever) to ensure we don’t become a national statistic on the official dengue count portal.

We hope you found this article illuminating, with the light of knowledge coming from a……… larvae lamp.