“Basic necessities will be exempt from being charged with the Goods and Services Tax (GST) to ensure that the lower income group will not be adversely affected.” – Datuk Seri Ahmad Husni Hanadzlah, Second Finance Minister, The Star

But what about sanitary pads for women? Bintulu MP Tiong King Sing asked this question, that day in Parliament. “Kotex (sanitary napkins) will cost more… the women grumbled that they would then have to pay GST every month,” he said in Free Malaysia Today. So one woman started an online campaign to petition for sanitary pads to be GST-free. That’s what got us started on this article in the first place.

So we checked the Government’s offisyel gazette of zero-rated GST items uploaded on their webbie on 13 October 2014. And yes, sanitary pads are not on the list. Boo. In fact, looking through it, we realised there are a number of other necessities not zero-rated. By ‘necessities’, we mean things which you have no choice but to buy (in some cases buy often), coz you need them.

Here are 9 GST-ed necessities and possible alternatives you can try. Pros: Save cheques, duneed to wait longlong for TAC to come in.

Cons: Get mugged, beaten up and possible killed.

According to The Star, the Finance Ministry posted on its Facebook page:

“For example, if a Maybank card holder withdraws from a CIMB ATM, and the MEPS charge is RM1, the GST rate will be RM0.06.” – Finance Ministry (on Facebook), The Star

So online kena taxed, cheque book also get taxed, how to pay salaries without tax? Cash lor, or OMG, coins. And barter trade too. How does 100 bags of rice for 1 month’s salary sound? But knowing the crime rate in Malaysia, we don’t think anyone will dare walk around carrying a wad of cash, so don’t bank on this alternative. Our editor personally knows the 3 friends who were recently mugged and beaten by robbers, covered by The Star. Pros: Save money on toilet paper, you’ll have something to read while baking your cake.

Wealthier Malaysians have been stocking up on toilet paper and tissues, according to TMI. But hey, how about using old newspapers? Coz newspapers no GST, hurray!

People in the past used old newspapers and even telephone directories to wipe their butts after doing business. In fact in the US, they used to print Old Farmer’s Alamanac with a hole so that people could hang it in the outhouse (tandas). It kills 2 birds with 1 stone because people could read while they did no.2, then after they were finished, they tore off the pages to wipe. Genius.

Look at it this way, you’ll not only be saving money, you’ll be saving the environment too. Less demand for toilet paper equals less output…with half of Sarawak’s rainforest already shaved off to build massive hydroelectric dams…

Otherwise you can also use leaves. Just make sure you don’t ter-pluck poison ivy like these people did. 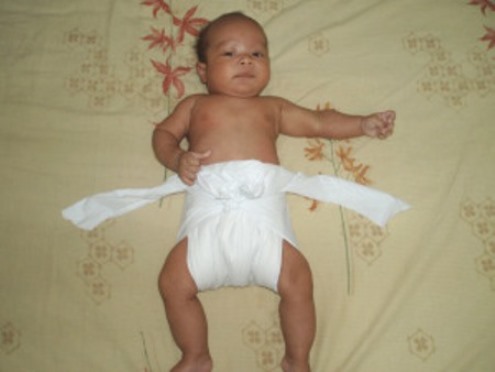 Image from sumijelly.wordpress.com. Click for her instructions on lampin bayi.

Pros: Eco-friendly, no smelly diaper ‘hill’ in your rubbish bin.

Cons: Gotta wash, gotta fold, gotta pin it on without poking the baby, so ma fan.

Raising a child in Malaysia is not cheap. iMoney did some calculations and to raise a baby for the first 12 months costs RM15,500. Not counting your pregnancy check-ups, delivery fees and baby’s medical charges, diapers are among the most expensive things Malaysian parents spend on after milk. For diapers alone, parents might end up paying RM1,200 a year, according to iMoney.

Since parents can’t be 24/7 watching their babies’ faces for the poop cringe and rushing them to the potty, diapers are a necessity. But now with GST, Pet Pet, Wee Wee Dry and Huggies Dry are going uuuu… DOWNNN la… by 2%, according to the Panduan Harga Pengguna. Wow, makes you wonder what the all the GST fuss is about…

If you still want a non-GST alternative though, ask your grandfolks to teach you how to use what they used to use on you – the kain lampin. Saves money and it’s eco-friendly.

Ohsnoes ugaiz, something so important to our health like medicine will increase price after GST. Health Minister Datuk Seri Dr. S. Subramaniam said, “So far, there has been no attempt to exempt 100% of the medicines from the GST…but we are also trying to get basic medical equipment to manage patients and treatments falling under the category.”

Why liddat? In so many countries, medical care is free – like Europe, Canada, Australia, Saudi Arabia and even Cuba. And we pulak, wanna tax for medicine… Pros: No accidental pregnancies, no STDs.

Oh there we go, the solution to Malaysia’s baby dumping, teen pregnancy and AIDS problem, just flew right out the window. Condoms are not zero-rated for GST, so you all have to be satisfied with hugging each other instead after 1st April.

It’s ironic that Malaysia is the 5th largest producer of condoms in the world (probably thanks to our natural rubber resource) and we’re putting a tax on it, hehe. But in our AIDS article, we mentioned that promoting the use of condoms can really help to prevent the spread of AIDS and other STDs.

At least we still have Panadol…

OK people, see you in the friendzone. Replace detergent with baking soda and vinegar. It works.

NAH, BACA:
No plans for the weekend? There's a petting zoo in Mont Kiara. With raccoons.

At first, people thought soap and shampoo would be taxed. When we checked the Federal Gazette, we thought it was too, along with toothpaste, dishwashing liquid, detergent, sanitiser, household cleaning agents, and basically things that help you get rid of icky germs.

But the Domestic Trade, Cooperatives and Consumerism Ministry (KPDNKK) recently released a Panduan Harga Pengguna, and according to it, many of these items’s prices are gonna DROP by 1.4%.

Don’t worry, even if you wanna wait out the storm and monitor prices, you won’t have to live in filth like Stone Age people. For the free option, you can just use WATER (well, you still gotta pay water bill la)… And have you heard of the No ‘Poo movement? We’ll give you a clue – it has nothing to do with brown stuff that comes out from the back. ‘Poo is short for shampoo. Some people swear by not using shampoo to get lustrous hair, at the same time to be environmentally friendly. Instead they just rinse their hair with water.

Ok, ok, baking soda and vinegar are NOT in the gazette as zero-rated, unfortunately. But they’re still considered CHEAPER substitutes and they’re practically your one-stop solution to cleaning everything. Pros: Houses in Perlis cheaper, Thailand is just next door.

If you are someone looking to buy a house, there’s good news and bad news. The good news is, GST will not be imposed on residential property, whether sale or rent… the bad news is, the cost of construction materials got GST. So property prices will still naik.

What to do? If you can’t afford to buy property in places like KL, Selangor, Penang or Johor, you could move to Perlis or Kedah.

But then again, it’s not like you can EARN much over there either. Perlis, Kedah, Kelantan, Pahang and Sabah have been flagged as the lowest income states in Malaysia. Aiyo, live under the Klang bridge la then.

In the GST Guide on Telecommunication Services, all local telecommunication services in Malaysia will be standard-rated. That means for broadband, we will be paying the 6% tax.

What could possibly replace the Internet? There are books….oops, but most books are GST-ed too. Your other GST-free options are dictionaries and encyclopaedias (close enough), and children’s colouring books.

But like birds, shouldn’t the Internet be freeeee? Mark Zuckerberg founder of Facebook believes that it should be. Why? Because obviously it’ll be good for Facebook, duhh. But also because this:

“By expanding Internet access in developing countries to levels seen today in developed economies, we could increase productivity by as much as 25%, generating $2.2 trillion in GDP and more than 140 million new jobs, lifting 160 million people out of poverty.” – Internet.org, Tech Times

That’s so perfect for a developing nation like Malaysia, not to mention $2.2 trillion would wipe out our RM744 billion debt!

So if you are worried about sanitary pad and tampon prices, try using sea sponges. Or animal pelt, moss, grass, rags, wool, vegetable fibres, lint wrapped around lightweight wood, any uncomfortable and itchy-rashy thing, or the Ancient Eyptian favourite…papyrus. Actually, please DON’T use animal pelt #cilisoswasjk. No animals were harmed in the writing of this article.

Basically this point got us started on the article, because there’s been a lot of panic on GST and people are unhappy because they think prices are only going UP. Everyone thought sanitary pads and tampons would be taxed. Kamelia Shamsuddin even started an online campaign called ‘Stop taxing Malaysian women for their Periods! Period.’ to petition the Government remove the GST on these items.

“Why should women be penalised with having to pay tax for what is biological?” – Kamelia Shamsuddin, Communications Officer, Free Malaysia Today But you know what guys, the KPDNKK’s Panduan Harga Pengguna reports that sanitary pads are going DOWN by 2%. Check out the Panduans here and you will be surprised to find out that the prices of many items will drop, even as some go up.

As for sanitary pads, 2 brands are mentioned here – Kotex and Libresse. However, to stay competitive, other brands will likely drop prices as well. So previously if you’ve been paying RM3.20 for a 10-pack Kotex, you’ll only need to pay RM3.14 after 1st April.

However, if you are seriously considering the sea sponge option, here are some tips to get you started.

You know what economists are saying about GST? The tax could be good thing for trimming Malaysia’s high debt-to-GDP ratio. That’s great news, what. Remember our RM744 billion debt?

Yet, many people are still hating on GST. Surveys have shown that the majority of Malaysians are against it, despite the Government’s marketing efforts to promote it, reported TMI. People are upset enough to start an online petition to exempt sanitary pads tax, and upset enough to start a protest outside the Customs Department in Kelana Jaya on 23 March. Image from Najjua Zulkefli for The Malaysian Insider.

But why is everyone so angry? Maybe it’s because people are worried about the most obvious effects on their way of living… like food, clothing, household needs, etc. especially the lower income group. All they think of when they see the letters G-S-T is tax, tax, TAX.

It boils down to the fact that many don’t really understand GST. Maybe if the Government was a bit clearer on explaining GST, there could have been less chaos. You guys also read the link for the Federal Gazette on zero-rated items right? Did you feel like swallowing GST-free Panadol after that? To us at least, the KPDNKK’s Panduan Harga was slightly more helpful. But when you read the Panduan, didn’t you guys notice that so many items also turun harga?

In the end, the best way for the rakyat to understand GST, is to EXPERIENCE it for themselves. We understand nobody likes change, but give it a chance la. And according to RHB Research, spending should go back to normal in about 6 to 9 months, once people become familiar with GST.

Tell you what, guys, why not go shopping after 1st April and see which of your regular household necessities have gone UP or DOWN under GST. We’re working with a couple of partners to monitor price increase for GST, which we will reveal soon. At the very least if you can’t solve the problem, at least you can monitor it.