According to the Bukit Aman Special Branch Anti-Terrorist Division principal assistant director Ayob Khan Mydin Pitchay, Arsa has been threatening Rohingyas to give them money (gangster style) in its operating areas like Kedah, Perak, Penang, Selangor, Kelantan, Terengganu and Johor. And, at the time of writing, Ayob mentioned that Arsa has collected a total of RM80,000 from Rohingyas from Malaysia.

Back in 2017, when this article was first published, Ayob clarified that although Daesh wants to support Arsa, the Myanmar militants are not part of the ISIS.

“They are not ISIS. We do not have intelligence that shows ISIS and Arakan Rohingya Salvation Army (Arsa) have joined forces,” – Ayob, quoted from The New Paper

Why are Rohingyas resorting to terrorism?

Just in case you’re wondering, ethnic cleansing is “the mass expulsion or killing of members of an unwanted ethnic or religious group in a society“. So it’s not a term that the UN would lightly throw around. And if you haven’t been following, the international community recently had their eyes on Nobel Peace Prize winner and Myanmar State Counselor: Aung San Suu Kyi.

On August 25th 2017, members of Arakan Rohingya Salvation Army (Arsa) attacked 30 police and army posts of Rakhine State state in Myanmar, killing 12 people in the process. This led to a retaliation by the Myanmar armed forces, assisted by local ethnic Buddhist mobs. The waves of violence that broke out forced hundreds of thousands of Rohingya Muslims and ethnic Buddhists alike to flee from their homes, seeking safety elsewhere.

Despite fleeing elsewhere, Rohingya Muslims don’t seem to be able to escape from Arsa. Faran Jeffery from a Britain-based counter-terrorism think tank, ITCT said that Arsa is threatening Rohingyas to give it money to keep its finances rolling because it has limited resources. Faran also added that the money is believed to be used to buy weapons, pay salaries of important militant figures (yes, they even have salaries ok) and pay non-members or informants for intelligence or favours. 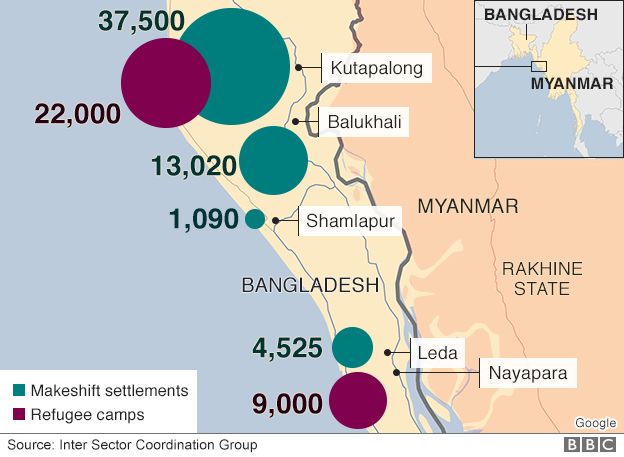 Map of displaced Rohingyas and their numbers. Image from bbc.com

But here’s where things get controversial. Foreign media were disallowed to cover the situation in Myanmar, so they could only rely on the accounts of Rohingya refugees that are seeking shelter at the Bangladesh border. From what they gathered from the Rohingyas, the Myanmar military was suspected of deliberately killing Rohingyas for no reason.

“They threw the children into the river. My three-year-old granddaughter, Makarra, and Abul Fayez, my one-year-old grandson. I was hiding on the south side of the river. They gathered everyone together and told them to walk away. Then they shot them.” – Kabir Ahmed, 65, told The Guardian

And this just might be why the Rohingya refugees in Malaysia gave money to fund Arsa as they fear that their families will get hurt.

“They still have families in Rakhine state in Myanmar and Arsa has threatened to hurt their families there. They would go to the shops where Rohingyas gather during the weekends to extort money.” – Ayob Khan told SCMP.

The Myanmar gomen on the other hand said the casualties were mainly militants. But it didn’t help when the gomen accused international charity groups of aiding the rebels, and Aung San Suu Kyi did not make any official public address on the issue (until recently), save a gomen statement that said that the crisis is being distorted by “huge iceberg of misinformation“. What?! So even Aung San Suu Kyi is blaming fake news now??

Back in 2017, the Malaysian authorities have anticipated that the Rohingya issue will attract Daesh’s attention since early January this year. Ayob Khan also confirmed that the group is using the widespread sharing of images of oppressed Rohingya people to gain sympathy and motivate new members to join them.

But as Aung San Suu Kyi said, many of the images of the crisis bring shared have been discovered to be fake. Even Mehmet Simsek, the Turkish deputy prime minister made the mistake of sharing misleading images disguised as the Myanmar conflict. He later removed the image and apologised for the Twitter post. 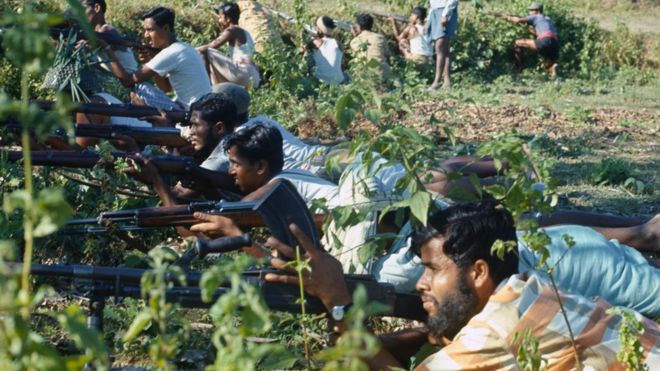 This photo is actually Bangladeshis in 1971, but is being circulated as something current.

So, is the Myanmar crisis empowering terrorists in Malaysia? As of September 2017, Malaysian authorities have already confirmed the arrest of 2 Daesh followers connected to the Myanmar crisis. One was an Indonesian man travelling to Myanmar to carry out attacks there, while another was a local cendol seller, who was also planning to travel to Rakhine, as well as for actively promoting the Daesh militancy. Even as far back as 2016, there were reports of Rohingyas being trafficked to Saudi Arabia by rackets using fake Indian passports.

And as of now, Malaysian authorities have arrested four Rohingyas who are believed to be linked to terrorism. For instance, a 20-year-old Rohingya was refugee was arrested earlier this year because he admitted that he was supporting Arsa and even had plans to attack the Myanmar embassy in KL.

But this doesn’t mean Rohingya refugees support this militant group. According to Ayob, only a tiny number of Rohigyan refugees who were involved in Arsa while majority of them actually rejected the group.

Of course, people are concerned that refugees might be easy targets for radicalisation. This might be true, according to Faran, because the Rohingya, who are already very marginalised, are an easy target for radical preachers and recruiters to convince them to carry-out terrorism. The same sentiment is felt across countries all over the world, to the point that U.S. President Donald Trump enacted a ban on Muslims from 6 countries into the United States. Some Germans also protested against allowing refugees from Afghanistan, Syria and Iraq into their country. But in reality, do refugees usually turn against their host countries? And commit terror attacks? A study done by CATO institute found that from 1975 to 2015, there were 20 terrorists out of the 3,252,493 refugees that came to the U.S. They also studied the number of fatal attacks carried out specifically by refugees in United States, and found that since 1980, the number of was 0. Yes, zero.

In European countries and UK, where it’s closer to the middle east, the situation is only slightly worse. Last year in Germany, only 2 attacks by refugees were reported. One was caught by other refugees before his plan was carried out, while the other was a knife attack that killed 1 and injured 2. A separate research by the Institute for the Study of War (ISW) conclude that while refugees have conducted terror attacks in other countries, there was no evidence of “coordinated Isis involvement”.

For Europe, the bigger concern is actually terrorist crossing the borders as refugees. And across the board, it’s the locals that are more prone in carrying out attacks in their own country, as we’ve written before here.

So far, the most extreme thing Rohingyas have done in Malaysia was … a protest

On August 30th 2015, over 1,000 Rohingyas and several NGOs in Malaysia gathered in KL city and marched to the Myanmar embassy in Jalan Ampang Hilir to hand over a memorandum protesting against killing of Rohingya Muslims in Myanmar. The protest caused some massive traffic jams and that naturally annoyed some Malaysians.

When they refused to dispersed after that and “started acting aggressively”, the authorities had to intervene, and some 44 to 155 protesters were arrested after the incident. The Malaysian Consultative Council of Islam Organisations (Mapim) has even called on the gomen to expel Myanmar nationals from Malaysia if the violence against Rohingyas do not stop.

“It’s not only affecting the Rohin-gya but the whole of Myanmar. We want a peaceful region and country. We want to have a good relationship.” – Mapim president Mohd Azmi Abdul Hamid, quoted from The Star 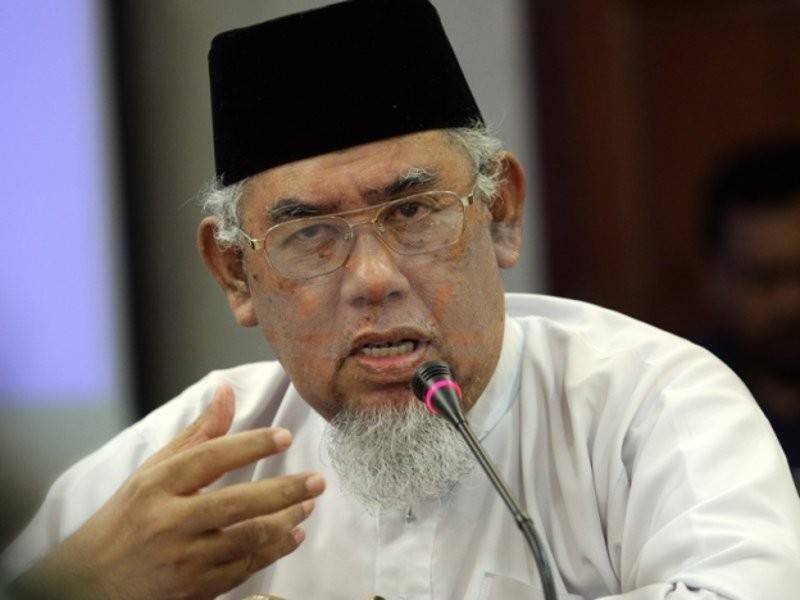 A Rohingya community leader in Kuala Lumpur, Mohd Rafi, said many of those who had attended the protest had lost family members in the latest violence.

Currently, it is said that there are around  176,000 Rohingya refugees in Malaysia, according to the United Nations figures. Unofficially, some groups put the figure at around 200,000, with many working in restaurants and constructions sites. But early in September 2017, Malaysia has expressed our willingness in welcoming more refugees with temporary shelter, should they flee to Malaysia.

We’re quite fine with the Rohingyas now, but there’s much more to be done

For now, Arsa (the Myanmar militant group) has themselves denied that they have any links to Daesh, or al-Qaeda, or any other terrorist group. The group said it does not welcome those entities into the conflict in the region “to prevent terrorists from entering Arakan and making a bad situation worse“. As Malaysians, with our unique blend of cultural tolerance, maybe we could be the band-aid the refugees need right now. Lilianne Fan, chair of Asia-Pacific Refugee Rights Network’s Rohingya Working Group said that the spread of militant group’s influence could be prevented by creating livelihood opportunities for refugees besides providing education and skill-development opportunities for Rohingya youths.

Coincidentally, while updating this article, the gomen is actually in talks with Japan to provide education for Rohingya refugee children. This is because, according to the Foreign Minister, Saifuddin Abdullah, although Japan does not have an outline on its proposal, it has shown interest to help providing Rohingya children in Cox’s Bazaar, Bangladesh.

“It is in this regard that we want to seek Japanese aid in helping out Rohingya children in Malaysia. We believe the way to help educate the Rohingyas is through civil society organisations (CSOs). As a government, we can help facilitate CSOs in obtaining finances which includes (through) international funding.” – Saifuddin to Malaysiakini.

Share this article:
NAH, BACA:
Who paid who how much!? We try to make the S'wak Report/PAS scandal easier to understand.