This article was translated from our BM site Soscili. To read the original, click here.

The internet is full of stories that can be seemingly real, but sometimes untrue. Stories like the Blair Witch Project, finding Bigfoot’s body, giant camel spiders in Iraq terrorising US soldiers, yadda yadda.

Some sites such as Uncyclopedia are not fooling anyone, coz it’s obviously utter BS (heck, they even have a story claiming BS is a world currency). Even on Wikipedia, a site which might appear to be factual, can contain totally fake information. The longest running hoax on Wikipedia about a non-existant Jack Robichaux, rapist of New Orleans, was busted only after 10 YEARS!

Goodness knows why people who spread fake stories got so much free time, and why as readers and users, are we so easily fooled? Here are 6 Malaysian viral stories that turned out to be total bollocks.

1. That Spritzer mineral water comes from a Chinese graveyard This happened in 2013, where people were sharing information that Spritzer, the mineral water brand, was contaminated by a Chinese graveyard was near the factory! In fact, there were several blogs warning people about it and telling everyone to spread the word to avoid Spritzer. It wasn’t front page news or whatever, but it was big enough to reach reddit level.

What is it with food brands and these scandals? First Cadbury, then Spritzer? Thankfully there were people who questioned the validity of the story, and someone even went all the way to ask an Ustaz for clarification for the sake of Muslim consumers: 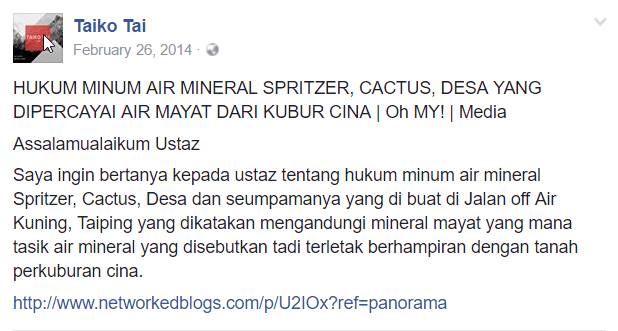 So how did Spritzer handle this blow? They made the decision to fight fire with fire. Since bloggers were the ones who first spread the fake news, Spritzer invited a group of bloggers (not the same flers who spread the lie) for a rombongan to their factory. Spritzer explained that their water was safe for drinking and also halal. Not a bad way to do damage control! 2. That Najib was on the cover of Time Magazine This was the photo being shared around. Image from malaysia-chronicle.com

Time magazine needs no introduction. One of its trademark features is its front cover, especially they feature someone’s face for their annual ‘People of The Year’ edition. It’s important that a person gets their face on the cover for the right reasons, otherwise their fame, notability, or on the opposite end, notoriety, will pretty much make or break their reputation.

So when PM Najib Razak appeared on the cover as ‘No. 2 on the most corrupt list’, it darned broke the Internet. Wheeww, that would’ve been sooo bad for his rep had the story been real, but it was revealed to be FAKE.

The person didn’t even do a good job of faking the cover because the fonts were all wrong and the publication date was inaccurate (Time is published every Monday and the date on the fake cover was Tuesday, 22 March 2016). Regina Lee, Press Secretary to Khairy Jamaluddin shared the REAL magazine cover which featured Apple CEO Tim Cook on the cover. Besides being shared by the rakyat on social media, PKR lawmaker Sivarasa Rasiah and former Temerloh MP Datuk Saifuddin Abdullah shared it. After the scam was revealed, Sivarasa was slayed on social media, and last we read, he was charged under Section 233 (1) (a) of the Communications and Multimedia Act for “creating and initiating transmission of false communication to annoy another person”. The punishment is a fine not exceeding RM50,000 or imprisonment of not more than one year or both.

3. That Lin Dan sent a bromantic letter to Chong Wei Yup, this incident is probably still fresh in your minds. To recap, after the Olympics match between Chong Wei and Lin Dan, the former was said to have sent our badminton star a heartwarming letter about their friendship. Read below: Would have been so sweet if it were real…. but it’s NOT. Nevertheless the story went viral and it could be traced back to one a Twitter user (the original tweet has since been deleted). However, this person did try to clear the air and explain it was fake, but too late coz the media already reported it.

Thanks to Google, Hype.my was able to find the original article on Sina (a Chinese media outlet). However, the original states “If they were to write a letter to each other, what would they say?” (translated from Chinese). And it described two made up ‘letters’, one from Lin Dan to Lee Chong Wei and vice versa. It was the Lin Dan ‘letter’ that got translated and spread online. Jeng jeng jeng.

Anyhoo, Chong Wei himself has denied the existence of such a letter, delivering a funny comeback: Although the letter was fake, the friendship between Chong Wei and Lin Dan is real, so it’s still touching anyways. 🙂

4. That Hup Seng biscuits are made from plastic Growing up, many Malaysians love to dunk cream crackers in Milo or kopi to eat. One of the beloved brands of cream crackers we would use is Hup Seng. But do you guys remember the time someone accused Hup Seng biscuits of being made from plastic?! OMGWHAT?

This fake viral story is actually quite recent… in July, someone uploaded this video on Facebook of a guy (speaking in what sounds like some Chinese dialect) burning a few Hup Seng biscuits and claiming it contained plastic. Not everyone believed the story la, some of them commented that they didn’t believe it, while some did. What we wanna know is what motivated this guy to burn the biscuits in the first place? And he not only wasted one, in the video he burned three pieces!

With 1.1 million views and 46k shares, the Facebook video caught Hup Seng’s attention. So they quickly released a statement:

“With regards to the case of burning biscuits, we would like to share that it is the characteristic of flour or oil related food products that they will combust or burn.” – Hup Seng statement, reported on Stomp

Hup Seng claimed that the last time they did a test on their products as in 2011, but they didn’t find any foreign element then. Since the video went viral, Hup Seng did another test again and found nothing dangerous. So guys, the biscuit does.not.contain.any.plastic (if you bite into the plastic cover, that’s another story la). Hup Seng is seriously considering suing that dude in the video.

5. That some guy was selling fake zam-zam water in Malacca 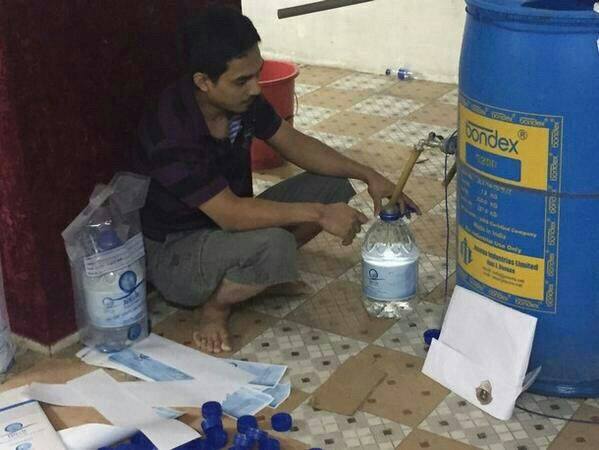 In April this year, a photo of one guy filling a water bottle with zam-zam water went viral. [P/S: Zam-zam water comes from the zam-zam well in Mecca, Saudi Arabia. People who perform Hajj visit the well to drink from it.]

So what was the problem? Well, people thought that this guy was selling FAKE zam-zam water in Malacca! The Ministry of Domestic Trade, Cooperatives and Consumerism (KPDNKK) and Jabatan Agama Islam Melaka (JAIM) kelam-kabut rushed in to investigate – but they found NOTHING.

It turned out that the fake zam-zam water scam happened in Mecca! Not Malacca. And according to the rules, Malaysia does not allow zam-zam water to be sold in this country. Even people who go to Mecca, who want to bring bottles home to families and friends have a quota of how much zam-zam water they are allowed to bring in here.

According to Gulf News, the strong demand for zam-zam water has resulted in many people selling fakes. Visitors are often warned not to buy zam-zam water bottles from street vendors and unlicenced shops so that they won’t be cheated. In the end, the guy who posted up the warning about the fake zam-zam water scam in Malacca updated his Facebook status with the real situation, Sinar Harian reported. Kantoi.

6. That a Malaysian VIP fell off a sinking boat This is a viral video we doubt you guys would have forgotten yet. Not so long ago, there was a 31-second video purportedly showing a Malaysian VIP/government official falling off a barge and into a river. It was accompanied with the Celine Dion Titanic soundtrack ‘My Heart Will Go On’ and it went mad all over Facebook and WhatsApp.

The caption of the video claimed the vessel was a ‘backhoe trash compactor invented by the Malaysian Innovation Agency’ and that its launch was being officiated by a Deputy Minister.

Now, the video below shows the same incident, but without the jiwang roman song, and with the correct description of what actually happened:

Yes, this awful incident did happen…in Goa, India (two months before it became the butt of everyone’s joke in Malaysia), involving Panaji Mayor Surendra Furtado, five officials and a journalist. They had all climbed on a weeding machine which was designed to only carry two people. Overloaded, the boat turned turtle and everyone fell into the water. No Malaysian VIPs were hurt in the making of this viral video.

Aiyo, how to make sure we don’t kena tipu??

With Photoshop and other technology, it is so easy to create false information in this digital age. And with Facebook, WhatsApp and other social media platforms, it’s so much faster to spread it too. News, pictures and videos are going viral before people can even ascertain if something is real or not. 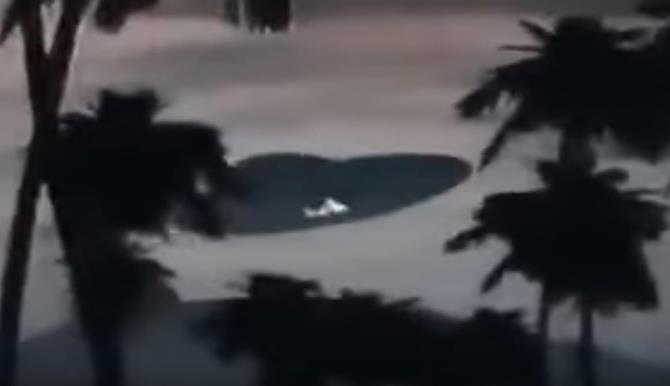 Like this UFO sighting in Kelantan! So real, much believe

So how on earth do we make sure what’s real and what’s not? Maybe before hitting that share button, we could do a little bit of our own Sherlock work – sometimes a simple search on Google is all it takes. If the news is being reported by a lot of legit media sites, then it’s more credible than say a random blog.

Sometimes, people make a big fuss when something goes viral, then it dies down…but what if it’s something very serious and far reaching that could damage someone’s reputation? The consequences could be a lot worse than looking foolish for sharing false information (like what happened to that guy claimed Hup Seng’s biscuits contained plastic, who might now be facing a lawsuit from them. And PKR’s Sivarasa who was charged for sharing the fake Time cover of Najib).

In Malaysia, you could get sued for sharing information that hurts somebody’s reputation according to the Defamation Act. This called a defamation lawsuit. The PM himself has sued a couple of people that way. When this happens, the person getting sued could kena saman huge amounts of money, and we’re talking about in the thousands and millions. It ain’t an apology over a cup of teh tarik!

So for your own sakes, be careful before sharing anything. If you kena sue, the tables are turned. It could be very serious and far reaching and could damage your reputation.