If you’ve been a frog under a tempurung in Peninsular Malaysia (sorry), the 2016 Sarawak Election will be taking place on May 7th. And as can be expected every time there’s an election, parties have gone full swing with their campaigns – with banners, posters, and billboards telling you which box you should be putting your X in.

But that’s also the problem, because with every party (and candidate) putting up campaign stuff you gotta try your best to stand out from the crowd, otherwise it just becomes lost among the all the other bagajillion election materials out there. Of course, this leads to some pretty inventive or (on the negative side) unsportsmanlike stuff being put up by the parties and their supporters, many of which have made their way to social media.

Since we’ve already covered the serious stuff like why Sarawak holds their elections at different times and why this election is so important, we figured we’d highlight some of these campaign materials, starting with…

1. Parties thanking Sarawakians for their votes

Some of the more creative leaders have taken to building eye catching models out of party banners. However, the general theme in Sarawak seems to be military vehicles – specifically tanks. We dunno why they chose this theme, but parties that have done this include: Honestly, the work put into the Parti Pesaka Bumiputera Bersatu (PBB) tank is really impressive. Click here for another view. This year though, they’re inviting Sarawakians to hop onboard and set sail for a brighter future: However, we gotta give the prize for the best vehicle goes to PAS, who literally took things to a higher level by building a bleepin’ JET- Here’s a more advanced-looking one from Bintulu: Seriously, we Semenanjung gaiz need to up our modeling game because, compared to Sarawak, ours is a little….flat Taken in Kota Kemuning during GE13

Seriously, that Harley-Davidson is more like a Hardly-Davidson. Hur hur hur.

2. This village has the best entry payment ever! Any Opposition reps planning to campaign in Kampung Stubot Padus better prepare a few cartons of cold ones because these guys made their election request loud and clear.

Loud and clear and FAKE. Here’s the actual un-Photoshopped banner: While whomever added the “beer” line definitely got us laughing, it also highlights the challenges faced by the Peninsula Opposition parties like DAP and PKR when it comes to reaching out to Sarawakians. We’re not specifically referring to this banner, but to the steps (allegedly) taken to prevent them from campaigning.

Adenan Satem is the current Chief Minister of Sarawak and president of the PBB. He’s also really popular – consistently scoring an approval rating above 80% in polls done by The Merdeka Center and Universiti Sarawak Malaysia, mostly due to his inclusive policies and down to earth leadership style taglined as #TheAdenanWay. We wish we could say he paid us to write this, but he really doesn’t need to because…

Some of his critics still insist that he’s just playing the good guy to win the elections but like him or hate him, we figure the only thing voters won’t do is to forget him: 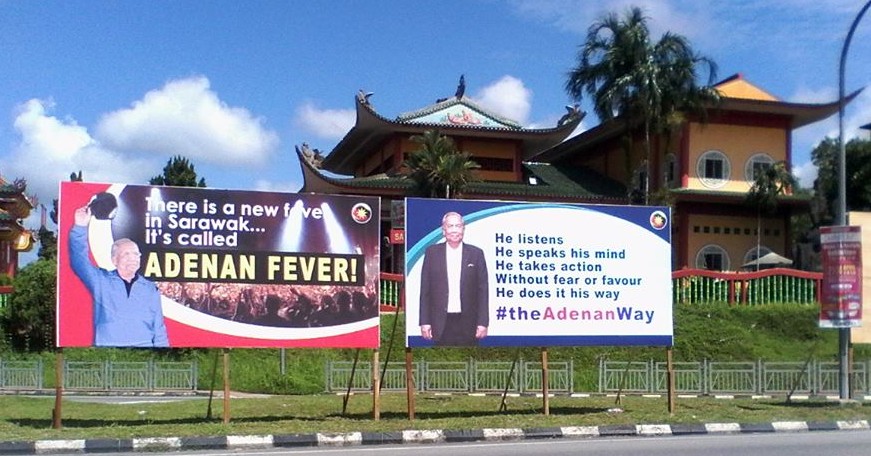 Considering how his billboards seem to be everywhere, it seems that any way you look will be #TheAdenanWay.

And now, for some not-so-good publicity.

A Malaysian military discussion group called Gempurwira lodged a complaint with the Ministry of Defense after spotting banners of dead Sarawakian freedom fighters “endorsing” the party. The two heroes used were Kanang anak Langkau, an Iban-Dayak soldier who defended the country from Communists and invaders: 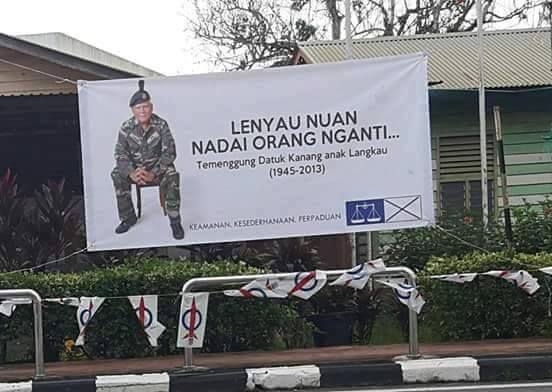 Translated from Iban: “Losing you is irreplaceable”. Image from Gempurwira’s Facebook page.

And Rosli Dhobi, a Sarawakian Malay who fought against the British taking full control of Sarawak by assassinating its second Governor in 1949: Gempurwira objected to the use of their names – particularly Kanang’s – because the Malaysian military is supposed to be independent of political parties and the government since their loyalty is to the Agong. According to the most recent update on their Facebook post, the Election Commission has removed the banners and the Ministry of Defence has promised to identify those responsible for the banners. You can read Gempurwira’s statement here. We’re not putting up any links to the above picture because we don’t know who started the post, but it’s been going around Facebook and Twitter as “proof” that BN is playing the religious card for the Sarawak elections:

BN denied putting up the billboard, saying they were framed. But that’s not the main issue… The main issue is that this actually happened in Peninsula Malaysia – in 2013.

Yep. It’s an old post being reshared as new.

It’s pretty hard to forget the name of Sarawak’s capital city since the internet is filled with them, but guess what animal makes up most Kuching’s statues and decorations?

It’s not a trick question… the answer is Cats.

So with all these cats statues with outstretched paws around, it’s only a matter of time before someone gets the bright idea of doing this: Putting the Dacing on the Kucing. Image from The Star.

It’s too bad we couldn’t find pictures with other party flags (though we’re pretty sure this happens every election), because we totally came up with kitty puns for some of the other parties, like Demeowcratic Action Party and Purrkatan Rakyat  😆

7. STAR wins the award for billboard with deepest meaning This State Reform Party, Sarawak (STAR) billboard is deep on so many levels that we spent more brain power deciphering it than we did writing this entire article.

For starters, the [MA63] at the top refers to the Malaysia Agreement 1963, which are conditions meant to safeguard the people of Sabah and Sarawak when the states teamed up with the Malayan Federation to form modern-day Malaysia. Here’s a close-up of the rest of it:

Here’s the message we get from the image:

There are some things we don’t understand though, like why the cow has one red eye.

8. DAP came up with the perfect billboard #burn

So you know how we mentioned four points ago that Adenan is really going all out on the billboards? Well, here’s a new one that’s popped up: This is only half a picture because what we really ain’t seeing is the response that DAP put up next to it:

We hope this would turn into some sort of (hopefully good-natured) billboard war like the one between Audi and BMW, but for now all we’re gonna say is…

Is it just us, or do elections seem a lot more muhibbah in Sarawak?

We actually have one more image to show ugaiz, which is this: These are “wedding chairs” from Dun Nangka to symbolize how people can still live in harmony despite their political differences. In fact, many Sarawakians consider the elections to be a festive occassion, with the socializing and gotong-royong involved in putting up party flags and banners as a part of the election “tradition”.

If there’s one thing our Sarawakian commenters never stop telling us in article comments, it’s how East Malaysia is the TRUE 1Malaysia: So perhaps we Semenanjung people should take notes from our Sarawakian friends and be less divided over our political issues. After all, it’s pretty normal for people to be divided over politics, but politics should never divide the people.

To our Sarawak readers, happy voting this Saturday  🙂