As a community, the Orang Asli is facing a lot of problems: land disputes, not getting basic infrastructure, lacking proper healthcare, falling behind in education, you know the drill. Today, let’s add one more to that list: religion. Specifically, the government converting them into Muslims, allegedly by pressuring them into it.

Let’s ease into the issue with something that happened a few days ago. Siti Kasim, a prominent lawyer-activist, uploaded a long video on Instagram that basically urged the government to stop doing that.

In summary, the video tells the story of a Batek community in Pahang who claimed to have been told to either convert to Islam, or leave their village back in the 1990s. They’re now trying to not be Muslims anymore, and Siti was one of the lawyers trying to assist them with that. However, after her most recent visit to their village, the Batek claimed that they’ve been visited by the police, religious authorities, and JAKOA, who showed up with questions and aid in the form of rice and zakat money.

For the Batek, these developments are deeply troubling, as they see it as the authorities pressuring them to stay Muslims. They claimed that several ustazs have been placed in the village, and a representative to the King of Pahang will be coming to hand out the zakat, further adding to the villagers’ distress.

“I am urging whoever is involved with this: stop pressuring. Stop going into the Orang Asli [villages]. Stop telling the Orang Asli you are going to do this and that. You are putting fear into them. You are making their lives miserable. I get these calls all the time; they are so worried.” – Siti Kasim, on her Instagram.

Now, you might be wondering why the state is trying so hard to keep these Orang Asli in the religion. We reached out to Pahang’s Religious Department to ask them that, but as of the time of writing, they haven’t got back to us yet. So we did some research on our own, and the first thing we’d like to address is the motive. As it turns out…

The end goal is to… make the Orang Asli Malay?!

[Note: We chose to use ‘convert’ instead of ‘revert’ in this article for ease of reading, so don’t @ us about it please.] At first glance, it’s hard to tell the difference between Malays and Orang Asli. Img from Sinar Harian.

First off, it should be noted that the government seems pretty open about their efforts to convert as many Orang Asli into Islam as they can. In fact, just two years ago Kelantan’s Islamic Affairs and Malay Customs Council (MAIK) had explicitly stated that they aim to convert all the Orang Asli within the state to Islam within 30 years.

“Our planning is if we have 500 people [as missionaries and community workers] a year, we can evangelise and, God-willing, in 30 years all Orang Asli in the state will be converted. We have a comprehensive evangelisation framework for the Orang Asli, including a thorough cooperation with Universiti Kebangsaan Malaysia (UKM),” – Nik Mohd Azlan Abd Hadi, then deputy president of MAIK, as reported by FMT.

But why tho? Well, barring the basic it’s-good-to-have-more-people-embrace-your-religion line of thinking, there’s actually a historical origin to the phenomena. For this, we’ll be referring to the works of anthropologist Toshihiro Nobuta, because (a) we can’t find a clear reason elsewhere, and (b) Toshihiro probably knew his stuff, having spent over two years of the 90s doing fieldwork in Orang Asli villages. As the (very simplified) story goes, after independence, the government had two goals for the Orang Asli:

Now, that second one is a bit weird, but some Malay groups today actually started out as Orang Asli. Back during British times, indigenous people were categorized according to their religion, with Muslim ones being referred to as ‘Malays’, and non-Muslim ones as ‘Aborigines’, ‘Sakai’, or ‘Jakun’. Over time, a sizeable number of the second group converted into Islam and picked up Malay ways of living, so after independence, they are also categorized as ‘Malays’. This might explain the Federal Constitution‘s definition of a Malay as someone who’s Muslim, speaks Malay habitually, and has Malay customs.

That’s Article 160, under ‘definitions’. Img from the Federal Constitution.

In the beginning, the JHEOA (Jabatan Hal Ehwal Orang Asli) was tasked with those two goals, but in the 1980s, Malaysia was hit by the Islamic resurgence movement, and it noticeably affected the government’s policies. Although JHEOA wasn’t keen on the whole Islamization business at first, in 1982 it came up with a strategic plan that aimed to convert all Orang Asli in Malaysia to Muslims, and eventually Malays. This marked the point where JHEOA started to lean heavily towards assimilation instead of integration.

Toshihiro’s paper mentioned that JHEOA carefully kept this plan under wraps at first due to fears of criticism, but the government became totally public with their plans starting from the 1990s. However, that’s just one side of the story. As implied by the Dr Colin Nicholas, Center for Orang Asli Concern’s (COAC) coordinator, the government may have not been completely honest with the whole Islamization thing.

“One of JHEOA‘s main objective is to convert Orang Asli to Islam. They don’t say it openly but their budget allocations and programmes lead to that. Their ultimate aim is to assimilate the Orang Asli into the Malay [Malaysian] section of society, although officially they say the goal is to integrate the Orang Asli into mainstream society,” –  Dr Colin Nicholas, in an interview with the Nut Graph.

Some Orang Asli claim they were tricked into to converting A mass conversion event in 2016 Perak, where 44 Orang Asli converted. Img for illustration, from Astro Awani.

While it’s fair to assume that some Orang Asli voluntarily converted into Islam, based on some news stories, some may have been forced into the religion instead. Besides Siti Kasim’s claims, there are several incidents that suggest some government agencies may resort to underhanded tactics to convert the Orang Asli. In 2010 for example, there was a report about Orang Asli in Gombak being essentially conned into the religion.

One claimed that he was tricked into saying the syahadah (the Islamic declaration of faith), thinking it was a standard procedure to replace a lost IC, while another was conned to go to a dinner banquet which later turned into a mass conversion ceremony, MLM style.

“I reached home about midnight after the event and told my family what had happened. My wife was furious. She told me, ‘You said you were going for kenduri. How did you end up converting to Islam?‘” – one poor guy who went to the dinner, as reported by the Nut Graph.

Then in 2019, a group of Temiars from villages around Gerik submitted a memorandum to the government. Among other things, they wanted for the government to stop making them Muslims without their consent. They claim that they’ve been registered as Muslims on their identity cards without wanting it, and their children have been taught Islam in school and forced to fast without their parents’ permission. 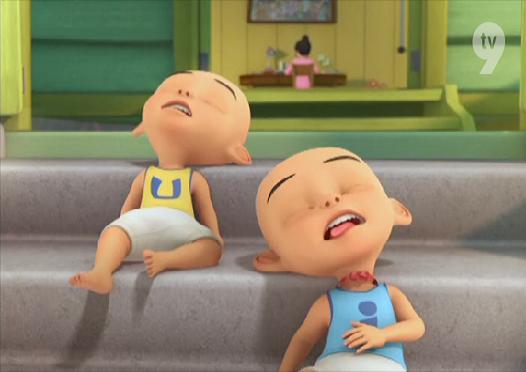 Some of us adults don’t even puasa. Img from UpinIpin Wiki.

Besides these instances of direct pressure, Toshihoro observed that the government have also practiced a policy of ‘positive discrimination‘, where JHEOA gave a lot of stuff and benefits to Muslim Orang Asli in an attempt to entice the non-Muslim ones to convert. Muslim Orang Asli staff of the JHEOA were also said to be given preference when considering a promotion. This created a sort of class divide among the community, with the Muslim ‘elites’ leading a life closer to the Malays, and the non-Muslims being pretty much sidelined by the government.

“For instance, one man who had recently converted to Islam was given a house through a governmental development project. After conversion to Islam, each convert was given financial aid of RM150 every month… In other cases, Islamic converts were given televisions in order to watch Islamic worship programs. Furthermore, in the case of Terengganu, Islamic converts were given motorbikes in order to go to the mosque of a neighboring Malay village.” – excerpt from Toshihiro’s paper.

To be fair, we can assume that not all attempts at converting the Orang Asli are as insidious as described here, but that pressuring the Orang Asli to convert to Islam, both directly and indirectly by government bodies, could possibly be more common than most people would think. Which brings us to an irony…

In trying to assimilate the Orang Asli, the government may be pushing them away University students learning how to use the sumpit, during a lighthearted dakwah expedition in Cameron Highlands. Img from Harian Metro.

Reading some local papers that discuss Islamization efforts towards the Orang Asli, one may get the impression that it’s all done with good intentions: one paper believes that through exposing the Orang Asli to Islam, their quality of lives can be improved and their ‘backwardness’ can be overcome. We won’t argue whether the Orang Asli should accept this gesture or not, but the trouble starts when the gesture is forced onto them by the government.

Toshihiro observed that the Islamization efforts by the government left the Orang Asli with two choices – convert or resist – and both are equally damaging. Many Orang Asli was said to convert for the benefits from the positive discrimination policy, and they don’t necessarily become real Muslims: they still hold on to their original beliefs and superstitions, don’t pray or fast during Ramadan, and drink alcohol and eat wild boars. They became Muslims in name only, a fact noted by local authors as well.

For those who resist, they are plagued by fear of the government’s encroaching Islamization, and it hurts them in the long run. Some parents refuse to send their children to school because they’re scared it will make their children convert. Islamization was also said to cause resentment towards the government and JHEOA in particular, so they further distanced themselves from authorities, refusing to join regroupment schemes to avoid being exposed to further pressure to convert and avoiding government employment in the JHEOA or the Senoi Pra’aq, among other things.

We can only say so much in a short article, so if you want to read up more on the matter, you can check out Toshihiro’s book on how Islamization affects the Orang Asli, which is available as a free PDF. Anyways, the counterargument is that it may be time for the government to accept that the Orang Asli have their own beliefs and worldview just like everyone else, and pressuring them to conform won’t do either side any real favors. After all, wasn’t there something said about roads paved with good intentions?