Malaysia’s incontestable tourism muscle has always been food, food, food. Which is great and all, but we also want to know what tourists are asking about other things in Malaysia. And what if we could use those questions as recommendations to improve tourism and give our tourists the WHOLE PACKAGE?

So to make Tourism Malaysia the coolest, most kickass travel campaign, we can’t just be sitting in a boardroom making suggestions, or travelling everywhere outside of Malaysia either. But we can gather questions from actual tourists on TripAdvisor to see what they want and then give them an awesome, unforgettable experience next time!

1. Is it safe to fly with a Malaysian airline?

OK sensitive topic. Walking on eggshells here. With 2 plane disasters in 1 year, we guessed this question would crop up on TripAdvisor. It’s even got people questioning the safety of other Malaysian planes like Air Asia, Firefly and Malindo. Others have asked whether it’s possible to get a refund for MAS flights.

But not everyone is put off. MAS will still have its customers (here and here). According to Jonny Clark, aviation brand consultant in The Guardian, plane disasters linger longer in the memory.

“When a plane crashes, it’s not the Boeing 777 that crashed. For the general public, it’s the company that was flying the plane that crashed – in this case, Malaysia Airlines.” – Jonny Clark, The Guardian

Everyone is talking about whether MAS will go bankrupt soon. They say the only saving grace for the company at this point is privatisation.

And is it us or is MAS’s food quality going down the drain? 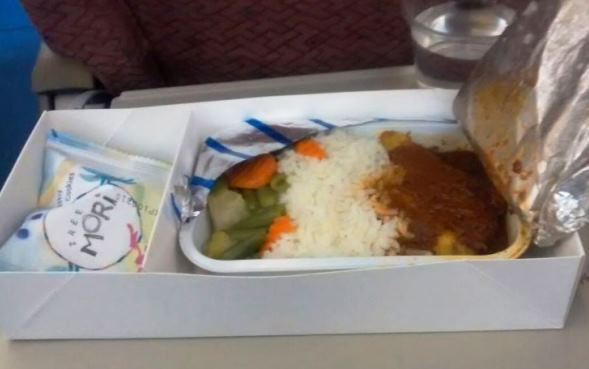 This meal was served very recently, like 5 days ago recent (15 Nov 2014). Where are the fruits? Where’s the roll? Where’s the little butter spread? We’re so hungreeeeeeee.

But you know they do have every reason to think about safety coz seriously, all the Sabah kidnappings are freaking our tourists out! Look at all the questions people are asking about Sabah. They’re ruining tourism in the state’s East Coast… possibly to the point of bankruptcy! To date, these guerillas have taken tourists, resort workers, and even the police as hostages (what jerks these kidnappers have to be to be doing such tak baik things in a place called Baik Island).

Tourism and Culture Minister, Datuk Seri Mohamed Nazri Abdul Aziz assessed that the damage from these kidnappings has become worse than the case of the missing flight MH370! How now?

Kota Kinabalu MP, Jimmy Wong made some suggestions. At the mo, our military forces are concentrated 70% in Peninsular Malaysia and 30% in Sabah and Sarawak. Ehhh, doesn’t East Malaysia have a bigger land area though? Yep. That’s why the 1,400km coastline of Sabah has a lot of entry gaps la.

The second proposal made by Wong is simply to review or replace the Special Branch. Currently, the unit’s duties are to monitor communist and political threats. But if they focused on crime prevention and counter-terrorism, the safety of Sabah’s East Coast would be much better!

Aiyo and it’s not just that yewnoe! People are asking about robbery and rape(?!). Femers tourist spots like Penang and Melaka are reported to be snatch thieves’ playground. On the forum, other users gave this tourist some good advice, including being extra careful with belongings and generally being alert of surroundings. Thankfully not every tourist becomes a victim. A woman from China was nearly robbed, but her policeman husband pulled the thief off his motorcycle and he was arrested by the police (ours) after that.

3. Can I go to Malaysia for surgery?

Did you know that Malaysia is one of the top destinations for medical tourism? Some of the questions we found on TripAdvisor asked about where to find the best doctors and dentists or hospitals. For a one-size-fits-all answer, tourists can check out the Malaysian Healthcare Travel Council.

Why are tourists choosing Malaysia? Because we’ve got some of the best doctors who are specialised in the most complicated treatments. One even performed the world’s first arm and hand transplant on a baby girl! Our pricing is also very competitive. Getting surgery in Malaysia is so much cheaper than in the US or Europe. So why not?

We were once the third most visited country for medical tourism in 2008, after Panama and Brazil, with 670,000 visitors coming in for treatment every year. But on Medical Tourism Index, we’re nowhere to be found on 2014’s list, while Singapore is at no. 4! Even as everyone is banking on Iskandar in Johor to develop into a healthcare Mecca… What happened?

Apparently we’re facing competition from all sides – Indonesia, Thailand, the Philippines and *sigh* Singapore. So, Deputy Chief Minister (I), Datuk Rashid Hasnon proposed ‘value-added services’ for medical tourists. Brownie points like transportation to and from the airport, accommodations and flight booking, pharmaceutical supplies and rehabilitation services after patients are discharged are some of the things that’ll make healthcare tourists’ trips go more smoothly.

Turn left then take the next immediate turn to where???

4. How much should we bargain for taxis?

No bargaining, aloha2510. Taxis in Malaysia are supposed to use the meter BY LAWWW! Malaysian taxis have like the worst reputation ever. But are they really evil? When Natalie Heng went undercover as a Mat Salleh tourist around KL, she wrote a report in The Star later that the infamy was true. In her little experiment, she took 11 different cabs and only 1 cabbie charged her a fee (RM10) that was the closest to Malaysia Taxi Auto Fare‘s calculations. 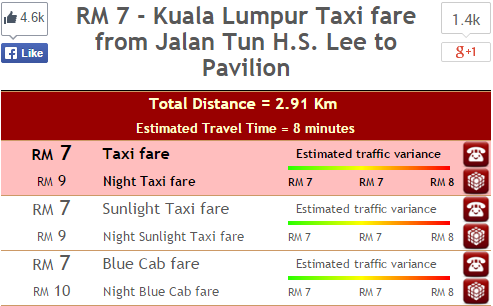 By the way, check out the site if you haven’t already. It’s such a useful tool to help you calculate how much taxi fares should be.

To tackle the taxi problem, the government will be launching a new system at the start of 2015, according to The Malay Mail. It can track taxi driver locations using satellite technology and direct the nearest taxi to a waiting customer. It’ll also alert the Land Public Transport Commission (SPAD) if a taxi meter is turned off. Through a special console in the vehicle, customers can even rate the driver’s performance.

Hooray, every Malaysian’s favourite subject – FOOD! And our country is known for its street food. When it comes to hawker stalls, you pretty much know you might need to compromise a smidge on cleanliness, yes or not? But for people who are particular, a grading system will clue you in on the hygiene level of a stall.

On a scale of 1 to India, Malaysian food is considered pretty safe by reviewers on TripAdvisor. And now that foreign workers are banned from cooking, you can count street food in Penang as very ‘authentic’.

6. Are there clean Western style ‘tiolets’ in KL?

Excuse me?!!! Well, OK la… we kinda knew Western tourists might ask this question because Asian toilets are known to be, errr, different. For clarity’s sake, here’s what a Western style ‘tiolet’ is: 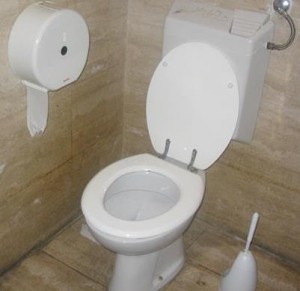 Ohhhh. Then what’s a not-Western-style toilet? 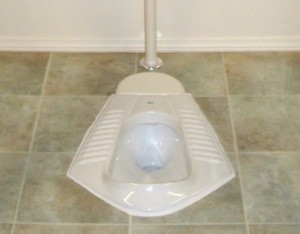 But as for sanitation though, Malaysian public toilets have a murky image. And this problem lies with the users, according to Azzatullina Pawanchik, Indah Water Konsortium Communications Head. Yes, the cleaners can clean and clean and clean but Malaysians need be educated on good toilet etiquette so that they leave a toilet clean for the next user.

“People, your toilet is not your rubbish disposal. You’re not supposed to flush all kinds of things down the sewerage network. The system can only handle human waste, not cooking oil, grease, foetuses etc.” – Azzatullina Pawanchik, The Star

With all the ‘aggressive’ work sown into Tourism Malaysia and the Ministry of Tourism and Culture, plus it’s budget of RM316 million, tourists are still not sure what to do when they visit? Aiyo, are we not doing the promothing correctly or what?

But that question is still better than… WHAAAT? Our KL? Boring? Our KL? Please, tell us what you want to see.

Are we really b..b…. bo…rrrring? What’s wrong with our touristy sites? Why you tourists no like? A Hong Kong tourist reviewed the Architecture Museum of Malaysia and this was what he/she had to say: Uhuh. Uhuh. So basically, our culture ROCKS… but the delivery could be better? OK, wouldn’t hurt to have some visitor interaction in museums as well. Maybe we could do re-enactments of scenes in Malaysian history like, like, Leftenan Adnan’s defence of Bukit Chandu, or, or, Tunku Abdul Rahman’s ‘Merdeka’ chants on Independence Day! And at the end of the show, we could make the actors quiz the audience – “You! What is the date of the Bukit Kepong incident?” *cackle cackle* No? Never mind. Just a thought.

Learnings for our well-funded Ministry of Tourism?

Tourism is Malaysia’s 3rd largest money-maker from foreign exchange. Last year, it brought in a revenue of RM65.44 billion and by 2020, it’s expected to reach RM168 billion from an estimated 36 million tourist arrivals. In fact, the extra cash generated by tourism helped a little bit in seeing us through the 2008 crisis. That’s how important tourism is to our economy! So according to statistics is tourism peachy or doing badly?

Malaysia had been the 9th most visited country in 2012, but last year we didn’t make it to Top 10 anymore. We are however the 3rd most visited country in Asia. Based on the figures from 1998 to 2013, tourist arrival numbers show an upward trend. Last year, we had 25.72 million visitors and this year, we’ve only seen the figures up to July, so we’re tak sure yet if it’ll be up or down this year.

So maybe here’s what the Tourism Board can do: this 3-pronged approach (ohgawsh is that like the most overused term or what?) – music, fashion and culture. Does music have an impact on tourism? Yeah it does! The UK’s economy adds about £2.2 billion a year thanks to tourists coming in for concert. So how about not banning or almost banning performers. Especially not after they’ve been booked to perform. Don’t get us wrong, Malaysia has awesome culture. But what we are suggesting is allowing the Coachella kind of culture. In the US, the Coachella festival earned US $254 million last year. And maybe that’s how our festivals like Urbanscapes could to be promoted too.

Errrm, how about un-banning FMFA too? The event brought in 15,000 tourists and RM52.5mil in tourist dollars last year explained Iqbal Ameer, one of the organisers. “This year we had estimated it to be around RM112.6 million,” he disclosed. Such.a.waste!

Yup that’s right. Safety and cleanliness as tourists themselves suggested (or rather asked about) on TripAdvisor. Since we mentioned that snatch thieves like to operate around tourist sites, maybe we can station more Polis Bantuan around those areas.

As for cleanliness, really what can we say. We can hire more cleaners to look after public toilets and other facilities but users should also make an effort to keep them clean. Aim la properly! *ahem* Here’s something you probably didn’t know… Malaysians make up the bulk of Thailand’s international tourists. Unfortunately, Thais don’t really have much reason to return the favour. It’s no wonder that Thailand is ranked 10th most visited country in the world. Its tourism board cleverly categorised their specialities under the theme “Seven Amazing Wonders“, which include culture, hospitality, heritage sites, historical attractions, beaches, and more.

So yes, for us, that means NOT tearing down our historical buildings (Pudu, we cry for you) and protecting ALL the cultures which make Malaysia, truly Asia. And if tourists love Thailand because of their exotic, if a bit homogeneous culture, they would love us 3 dan lain-lain times more!!

Share this article:
NAH, BACA:
The British soldier who disguised as a Malay to infiltrate Japanese WWII warships