But since the 1960s, the Borneon Rhino in Sabah has been in decline, thanks largely to their forest habitat being turned into palm oil plantations and also being pouched for their horns. By the 1980s, they have become a rare sight even in the wildlife reserve.

Other than these external factors reducing their population, the Borneon Rhinos also have a slow birth rate. Females can begin reproducing at the age of six, but males can only reproduce at age 10, and pregnancies can last for as long as 15 months. As more land is being cultivated, their population becomes more separated from each other, making it even harder for them to meet and mate. According to WWF-Malaysia, there has been no verified record of the rhinos breeding in the last 10 years, suggesting that the population has been shrinking for the past few decades.

This could lead to what is known as the “Allee effect“; when the population of a species is too small to sustain itself, and gradually going into extinction because its death rate is higher than its birth rate.

So in 2013, WWF-Malaysia, the Borneo Rhino Alliance (BORA) and the Sabah Wildlife Department, with the financing from the Sime Darby Foundation, decided that human intervention is needed to save the rhino population in Sabah. To do this, their plan was to capture all the remaining rhinos in the wild and put them all in the Borneo Rhino Sanctuary where they can breed. 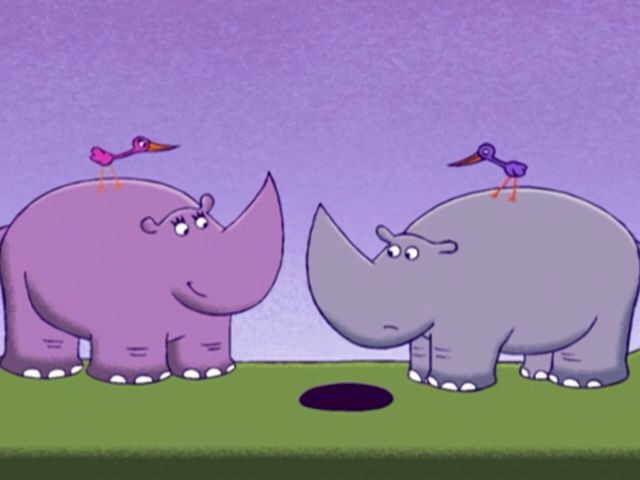 Move in together, make a family too

In 2008, they had already rescued a male rhino, which they named Tam, from a palm oil plantation. Now all they needed was a mate for Tam…

Then came this one female rhino… The damsel in distress… Image credit to borneoproject.org

In the wild, a female rhino with a stump on her left leg was spotted since 2006. After months of observation, they set a trap for her and caught her in 2011. She was airlifted to the Borneo Rhino Sanctuary where she was put beside Tam, and named her Puntung.

Aside from her missing left leg, which experts believed could have been due to snare traps when she was young, Puntung was found to be around 10 to 12 years old which meant that she was at a reproductive age and could mate with Tam!

This was good news since the last 2 breeding attempts during the 1980s and 1990s had failed. Puntung’s capture and her fertile age meant that she was the new hope to save the Borneon Rhinos in Sabah.

However, natural breeding between the two rhinos could pose a risk for Puntung due to her lack of support from her missing leg. Since male rhinos tend to mount a female while breeding, they were concerned that Puntung would not be able to bear the full weight of Tam on her. Instead, they opted to use advanced reproductive technology from Italy, Indonesia, Singapore and Germany to put Tam’s sperm into Puntung. Puntung and her missing left foot. 🙁 Image credit to borneoproject.org.

While examining Puntung before performing the procedure, the experts found bad news:

NAH, BACA:
Sarawak NGO member who disrespected Negaraku might be... a BN supporter?!

Basically, a previous failed pregnancy had caused Puntung’s uterus has been lined with cysts which makes her unable to to carry an embyro! It was truly heartbreaking.

Then as if things couldn’t get any worse…

In April 2017, her caretakers reported that she hasn’t been eating well. She was found to have an wound on her upper jaw and she was not responding to treatment. News of this went around on the social media, and caught the attention of a South African environmental group who read that Puntung is one the last surviving Borneo Rhinos in Malaysia. Puntung and the abscess on her left cheek. Image credit to New Strait Times.

After corresponding with the Borneo Rhino Alliance, veterinarians from a South African non-profit organization called Saving the Survivors were arranged to perform surgery on Puntung.

Within weeks, the veterinarians arrived at the wildlife reserve and they performed a two hour surgery on Puntung to remove three of her teeth that was deemed to be the cause of her wound. The three teeth removed from Puntung. Image credit to The National Geographic.

Puntung was in high spirits and was back on her regular diet within hours, and one of the last Borneo Rhino with still a few more reproductive years was saved from what would otherwise be deemed as a lost cause.

But that’s not the end of the story. After her surgery, her caretakers noticed that there was a growth over her left nostril where her wound was previously. A few biopsies later, it was later identified that the cause of her problems in the first place was cancer, and it had spread over her rapidly in the weeks after her surgery.

After going through the reports, the experts and her caretakers came to a grim conclusion: Puntung would not survive whether with treatment or not. The growth on Puntung caused by the cancer. Image credit to New Strait Times.

By then, the growth on Puntung had been all over her, preventing her to even breathe from her left nostril, and she was physically in pain. To end her suffering, the Sabah Wildlife Department decided and authorised that Puntung would be put down on June 15. However, her situation became much worse, that her euthanasia was pushed earlier.

On the morning of 4 June 2017, Puntung was put to rest after her caretakers spent every hour with her until her last.

So no hope liao for the Borneo Rhinos in Sabah? :'(

Puntung had a few years ahead of her to produce eggs, and her death was a big blow to preserve her species in Sabah. Still, not all hope was lost. Upon her death, an Indonesian reproductive specialist was on site to recover egg cells from Puntung and sent them to the Agro-Biotechnology Institute in Serdang.

It is the hope that by inseminating her eggs cells with the frozen sperm of Tam, a rhino embryo could be artificially created and inseminated into a surrogate mother from Indonesia, where there is still a small population of the Borneon rhinos left.

Puntung is also not the last female rhino left in Malaysia. In 2014, there was another female rhino who was captured called Iman. However, like Puntung, Iman is also found to have cysts in her uterus, so she cannot bear children naturally, but her eggs can still be used to create an embryo in the labs. So while it is very likely there will be no more Borneon rhinos in Malaysia in the near future, their future as a species on this planet still lives on. Rest in peace, Puntung.