When talking about exotic food in Malaysia, you might think of rendang made out of porcupines, deep fried frogs, dishes made out of unorthodox parts of usual meat (like soups made of bull penises), sago worms, or even unusual condiments like tempoyak or budu.

Let’s add another one to that list: puffer fish. They may sound more like a Japanese kind of food than a Malaysian one, but did you know that a town in Sarawak has a whole culture centered around it? In fact, the fish is so integral to the town that a statue of it can be seen there: So majestic. Img from the Official Portal of Betong.

The town is Spaoh in Betong, Sarawak, and very year, they host a festival that centers around catching and eating the fish. By now you might wonder…

Wait a second… isn’t that fish like deadly poisonous or something? When you hear the locals starting up their boats. Img from Meme.

You’ve probably heard of puffer fish (aka blowfish or fugu) before, and besides being famous for teaching sea creatures how to drive their boatmobiles, they are also known to be extremely dangerous to eat. In 2009, seven diners in Japan got severely poisoned after eating grilled blowfish testicles, said to be prepared by an unlicensed chef. The puffer fish is also said to be the only food the Emperor of Japan is forbidden by law to eat, no matter how skillful the chef who prepares it.

The fish’s reputation is not unfounded, as most species of puffers contain a poison called tetrodotoxin (TTX), which paralyzes people (or other predators) who chomps on the fish. Currently, there are no antidotes for it, and the standard treatment is to support the victim’s breathing until the victim’s body can naturally pass the poison. The less poisonous parts of the fish can still be eaten though, as long as the poisonous parts have been removed by a skilled chef first. In many regions in Japan, only chefs who have undergone many years of training are certified to prepare and serve the fish, but in Sarawak, it’s a different story. Not sure how many of you will get the reference, but hey heyy. Imgs from EatDrinkBreathe and African Shark.

According to Dari Sait, who lives in Spaoh, eating puffer fish is such a common thing that most people living there can prepare the fish for eating.

“The Spaoh area is well-known for yellow puffer fish. Most of the people who live here are ‘experts’ at cleaning the fish (removing the poison) and afterwards, cooking it according to their tastes,” – Dari Sait, to Sinar Harian.

Wah lao. The Malaysia Boleh spirit is strong right here. Can this town actually be more terer than a bunch of expert Japanese chefs? We’ll let you figure that out, because…

The Sarawakian puffer fish may be a bit special Knowing how seriously people see the risk of eating puffers, it might be a bit jaw-dropping to think that a bunch of Sarawakians made a festival out of catching and eating them. Your jaw might drop even more if you know that the kind of puffers that the Spaoh people are eating are supposed to be even more dangerous than the ones the Japanese chefs dare to serve.

The most common type of puffer found in the Saribas river is often quoted to be the yellow puffer fish (Lagocephalus lunaris), which is different from the type commonly served in Japan (from the Takifugu genus)… and here is where it gets intriguing. According to this guide by the Japanese government, the Takifugu may have poisonous skin, ovaries, liver or other parts, but often the flesh is not poisonous, so you can still eat the carefully prepared flesh. The yellow puffer, however, is poisonous in all parts of its body, and according to this research paper that measures tetrodotoxin levels in Japan-caught L. Lunaris, very much so. At least they’re organic. Imgs from Villains Wiki and Pinterest.

Yet a local Betong woman can only recall one death from eating an undercooked batch of puffer eggs, and a UM paper in 2008 mentioned that the side effects of eating yellow puffer had been vomiting and fever in persons with weak immune systems, leading them to believe that the yellow puffer carry a different type of toxin. However, a recent study did confirm that they do carry tetrodotoxin in all parts of their bodies, but the species is the least toxic out of the 14 puffer species that can be found in Sabah or Sarawak.

In fact, looking at the numbers, the toxicity levels are very different between the fishes in the Japan study and the ones in the Sabah-Sarawak study. This could perhaps be because puffers don’t make their own tetrodotoxin; the poison comes from what they eat. Farmers in Japan had managed to rear non-poisonous puffers by controlling their diet, so it’s possible the puffers that come to Saribas may not be as poisonous because they weren’t eating as much tetrodotoxin as the ones in Japan.

NAH, BACA:
Raising a baby in 2018: 6 arguments Malaysian millennial parents always have with their parents

Regardless, Sarawak’s puffers still contain quite a bit of TTX, so do Betong people have really tough bodies, or are they just that experienced when it comes to cooking puffers? Actually…

How do these people cook a puffer fish?

Obviously, they have to catch it first lah. There’s a season for yellow puffers in Sarawak, when they travel 30 kilometers up the Saribas river to lay their eggs in freshwater before returning to the South China Sea. This can be sometime between April and October, depending on factors like the tides, water turbidity and moon phase. The river is a favorite among yellow puffers due to its narrowness, sandy bottom and the shelter it gives from ocean currents. The Saribas River, and some of the villages along it. Img from SengatanPeringat’s blog.

Anyway, during the fish’s arrival locals may catch them by spreading a net across the river, or by using a tanggok, which is a sort of basket made of rattan that is tied to the back of a boat and dragged against the current, trapping the fish inside. After the puffers are done laying their eggs, they get hungry, so other tactics are employed. One of them is by traps set underwater with shark flesh as bait, and the other (arguably more fun) method is by using a sagang, which is basically plenty of shark meat wrapped around a giant hook thingy.

This is lowered into the water to lure the puffers to it, and once a puffer starts nibbling on it, the sagang is slowly raised to the water surface, enticing the puffer to follow it. Yellow puffers are said to have reflective strips on their body, and once the fishermen sees the shiny bit following the sagang, he or she will scoop up the fish and repeat the process. Here it is in action:

You can also fish using a line, but this method is said to get you smaller fish as the bigger ones have teeth that are strong enough to cut the line.

While techniques to prepare them may vary a little, essentially the fish is washed, and the nerves and blood vessels are removed, as well as any viscera. If the fish has eggs, extra care is taken to remove the membrane and vessels surrounding them, as these can cause poisoning. The spikes are also removed, although some say that the skin, when fried to a crisp with the spikes on, is a snack beloved by children.

After rinsing the cleaned fish off (or further detoxifying it by boiling with bamboo shoots), it can be either be dried, pickled (to make pekasam) or cooked, most popularly in a spicy dish like Asam Pedas or roasted in banana or nipah leaves. Interestingly, the liver, which is said to be the most toxic part of puffers, are also eaten. Seem to be puffer liver, deep-fried in batter. To be eaten with fried rice. Img from The Madah’s blog.

So if you’re wondering what a poisonous fish tastes like…

You can try attending one of their annual puffer fish festivals

Since 2002, Kampung Manggut in Betong had hosted annual festivals with the yellow puffer fish as the theme. In the beginning, the activities during the festival only includes sampling and sales of the fish, but it had since expanded to include activities both regarding the fish and other staple festival affairs. There are puffer catching competitions, demonstrations on how to clean and cook the fish, and a coloring contest for the kids (coloring a picture of the fish, of course), among other things. Last year’s event (in November) even had a beauty pageant (Miss Buntal?) and a zumba contest, so we’d guess things got pretty wild. 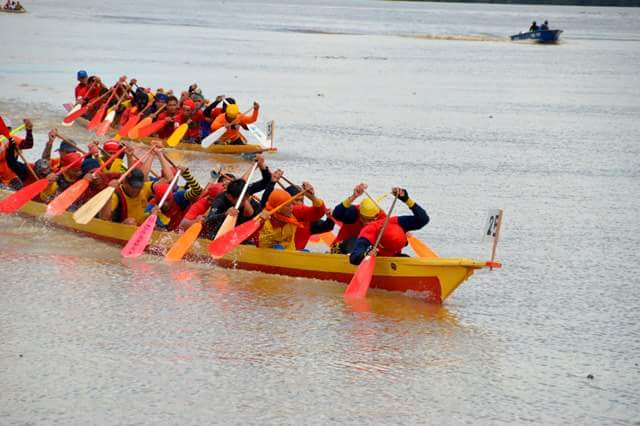 And… boat races. Might as well. Img from PestaIkanBuntalBetong’s blog.

Wild as it may be, the events do have an impact on the town’s tourism and economy. For one thing, it drove up the demand of a previously unheard-of fish. According to Datuk Romie Sigan, Betong’s Resident in 2011, with the increasing public awareness of Sarawak’s puffer fish, the price had more than doubled over the past decade.

“When we first started the festival in 2002 in Spaoh, about 30 minutes by road from Betong town, the fish was priced at RM3.50 per kilogramme but today it is RM8 per kilogramme. Over the years, the festival has created public awareness of ikan buntal and more people dare to eat the poisonous fish now as long as the fish is cleaned and prepared properly.” – Datuk Romie Sigan, as reported by The Star.

And that’s the 2011 price. According to a recent Bernama report, fresh puffers are now sold at RM10 per kilogram, dried fish at RM10 for 3, and the eggs at a whopping RM40 per kilo. The locals are also making money, both directly from the event and indirectly as well, through renting out places to stay for tourists and visitors, renting fishing boats or even setting up a fish cleaning service for puffers caught by visitors. Besides the economic boost, the festivals have also prompted Sarawak’s Fisheries Research Institute to allocate research funding for the yellow puffer fish in 2011, and among other things they’re looking to the possibility of rearing the fish. All in all, the festivals seem to be quite successful, and it’s pretty amazing to think that the people of Betong had managed to turn a fish that a normal person wouldn’t even dream of eating into an experience that people would travel to their town for.