What began as a mission to capture a high profile terrorist leader – Isnilon Hapilon, has escalated into battle to regain control of a Philippine city.

In case you haven’t heard, the city of Marawi in Philippines was taken over by Islamist terrorists. The fighting, which began on May 23rd, has stretched into its second week now, with a death toll of over 200 people (mostly terrorists, but includes soldiers, policemen, and civilians as well). 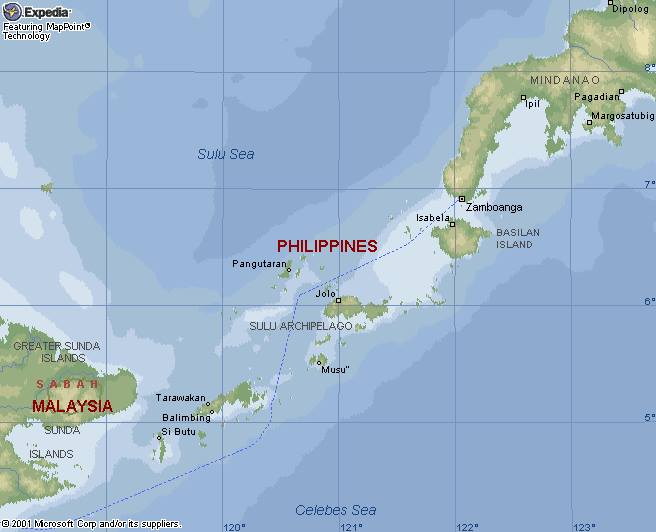 Proximity of Mindanao to Sabah. Image from geocities.ws

Minister of Defence, Hishammuddin Hussein has expressed his concern of the situation, and recently announced a joint border patrol operation between Malaysia, Indonesia, and Philippines. More soldiers and 2 additional ships are also being deployed to the islands off Sabah. Even Deputy Prime Minister Ahmad Zahid Hamidi recently announced that the PDRM anti-terrorism unit will be getting an upgrade.

“This is because of the incidents that have taken place in three of our neighbours including the bombing at a hospital in Bangkok, another bombing in Kampung Melayu, Jakarta, and the conflict between Filipino forces and militants in Marawi City, Mindanao,” – Hishammuddin Hussein said in his speech

To keep up the spirit of several world leaders and also this article we once wrote, we will be using the term “Daesh” instead of “ISIS” from here onward (mainly because they people calling them that).

There is literally a war happening outside our doorstep

We find it a little surprising that this happened. Not only is there such a large number of terrorists so close to Malaysia, but they’re armed and equipped to the point of giving the Filipino military a hard time. The Filipino president recently even accepted the assistance of the Moro National Liberation Front (MNLF), an anti-gomen Filipino militant group that attacked a town in Zamboanga city back in 2013, to fight the terrorists. Breakdown of the different terrorist groups in Philippines. Screenshot from thomsonreuters.com

Malaysia once had the Lahad Datu standoff just 4 years ago, but we never had it as serious as this before. Until 2014, Malaysia was known to be a major transit hub for Islamist traveling to Syria, but then our authorities have been super efficient at arresting their members, and foiling their evil schemes. But because of that, it has forced the local Daesh Islamists to shift house to somewhere with lesser enforcement, i.e. Philippines, which is why so many large-scale terrorist groups are setting up headquarters and training camps there. However, one thing is still clear: the Daesh still has influence on Malaysians.

Daesh is targeting Islam youths, and Malaysians are joining at an alarming rate

A survey that is cited by a lot of articles is the one by Pew Research, and the results look like this: 11% of Malaysians are in support of Daesh!? That’s more than double of Iraq, the birthplace of Daesh. We’ve cast our doubt on their methods before, and it’s safe to say that it is not representative of the whole of Malaysia. But so much time has passed since then, and now it’s clear that Malaysians are joining Daesh faster than even the largest Muslim country, a.k.a Indonesia.

There are already plenty of analysis and assessments done on why Malaysians are so  susceptible to being radicalised. We’d suggest giving some of the links in the previous sentence a read (shortest one is this one here) as that topic alone can be a long one. To summarise, Malaysia’s anti-Shia stance and the politicising of Islam are the top 2 reasons constantly brought up.

And as several articles point out, a lot of the attacks around the world were carried out by youths in the local community. The Boston bombing (23 years old), the Manchester concert attack (22 years old), the London attacks (27 years old), and our very own Muhammad Wanndy (26 years old), were all less than 3 decades old. Should have just let them have that ice-cream. Image from comicvine.gamespot.com

So why is Daesh so successful in influencing local youngsters to terrorise their neighbourhood? While some experts have pointed out that young people are more prone to extreme or reckless behaviour, their social standing seems to be a more relevant reason.

“These young people were not admitted into prestigious universities and were denied decent jobs. They lived in neighbourhoods devoid of proper planning and facilities, and were invariably discriminated against and excluded by members of mainstream society they came into contact with. Life to them was hard, their future extremely remote. All they had was depression and frustration.” – Tay Tian Yan wrote in Free Malaysia Today

The explanation falls in line with what’s happening to the two famous countries that have been at war with terrorism for years. 36% of Afghanistan still live in poverty, while in Pakistan its 40%.

Is it possible for Malaysia to suffer the same fate one day? (choi) Although it’s scary to think about, but this recent incident is a wake up call to all of us in SEA. Seeing how many plots our authorities has stopped in Malaysia, it’s no secret that Malaysia is in Daesh’s sight. The Malaysian authorities may continue doing a fantastic job of nabbing its members, but how long can we kipidap?

We’ve been seeing years of arrests, but until now we still see people pledging themselves to Daesh. For those that want more stern or extreme measures against Daesh, refer again to the situation in Afghanistan and Pakistan, where despite years and years of death and destruction, the threat of terrorism remains till this day. At this rate we’d catch all the Pokemon before they kill all the terrorist. Screenshot from aljazeera.com

So we don’t know for sure if Malaysia will one day see an attack on the scale of Marawi’s, but if Malaysians continue to be lured by the extremist ideologies, we will never stop questioning the probability.

Meanwhile, not giving in to fear is the best way to fight them In the recent string of attacks on majors cities in the UK, its citizens have grieved, but instead of anger and hatred, many had responded with kindness and love instead. Taxi drivers giving free rides, and locals opening their doors to strangers were among the heartwarming stories that surfaced after the attack.

If we respond to them with violence, Daesh will only use it to further justify their actions. If we continue to spread fake news about attacks and bombings, or bash Malays or Muslims for being terrorists, then we would only be playing into Daesh’s tactics and propaganda of fear.

On that topic, fear isn’t just owned by any one group. Remember the National Security Council (NSC) Bill that gives our PM some very scary powers? And the confusion after the bar attack in Puchong? With all that’s happening now, it’s just as important to question if the authorities are telling us the truth, and using their powers responsibly, because we’re not always paying attention…

Which is why aside from the abangs and kakaks of our security forces, the “counter terrorism” efforts we should hope to see more are like JAKIM’s and the Education Ministry’s efforts to educate youths, and to address the causes of radicalisation of Malaysians.

We know this article might be a little too preachy or depressing, so here’s a video of a French dad and his kid, that beautifully sums up the whole message.

Share this article:
NAH, BACA:
Is ISIS a Threat to Malaysia? [UPDATED!]