So in case you haven’t heard, Barisan Nasional (BN) hasn’t been having the greatest of times in the past few months. They’ve lost the election, have both former and current leaders of the coalition charged in court and have seen various component parties leave them like your ex after the relationship soured. So many parties have left them in fact – including some big names such as Gerakan – that they’re down to just three components parties left, which are UMNO, MIC and MCA. With so much drama happening in BN like one of those bad family TV soap operas, we thought that it would be a good time to break everything down and explain to you confused peoples just what exactly is happening in the opposition coalition, starting with…

1. Barisan Nasional is going to be rebranded

You know how whenever a big brand or company gets involved in some major controversy you will see some serious PR exercise going on? Well, think that, but for Barisan Nasional as a means for them to get back into Putrajaya when GE15 comes around.

BN leader Zahid Hamidi has recently announced that BN will be rebranded as a new coalition consisting of the current parties along with new parties and non-governmental organisations (NGOs). He added that the core parties in the new and improved Barisan would be UMNO, MCA, MIC.

“For me, the ‘Alliance 1.0’ was formed in 1955. ‘Alliance 2.0’ or BN was created in 1974 with Umno, MCA and MIC as the core parties. Now in 2018, I suggest that ‘Alliance 3.0’ become a coalition of parties just like BN. We need to be brave and courageous, just like what Tun Abdul Razak did… The Alliance was rebranded as Barisan Nasional. It was well-received,” – Zahid Hamidi, as quoted by Malay Mail As part of this restructure and rebranding mission for the coalition, a surprise announcement was made by Zahid that the new secretary-general of BN will be Datuk Seri Nazri Aziz. His first task would be to carry out the rebranding.

“Yes, I am the new secretary-general, as announced by Datuk Seri Zahid. I was informed about it three months ago. We will start engaging with other component parties in Barisan and then followed by other parties,” – Nazri Aziz, as quoted by Malay Mail

Okay, so we know that the new Barisan will be led by familiar faces, but as for the other component parties….

2. Other parties and NGOs may soon join the rebranded BN

Now with a number of component parties having left BN, it can get quite lonely these days, so Zahid has mentioned that along with the rebranding of BN, the coalition is also set to see a number of new parties in it. Specifically, Zahid says that BN are currently considering the applications of the Indian Muslim Congress (Kimma), Indian Progressive Front (IPF) and the Makkal Sakti.

“We will consider the majority voice on whether to accept them as component parties,” – Zahid, as quoted by Malaysiakini Kimma in fact had applied to join BN before GE14, and asked for them to be allowed to contest two parliamentary seats and four state seats under the BN banner. However, it seems as tho while all three Indian-based parties may be BN-friendly, they were never allowed into BN apparently due to objections from MIC.

We highly doubt that the new BN will have their own group of cheerleaders tho.

This is of course all on top of further allegations that PAS may soon be joining Barisan Nasional as well. Zahid mentioned that PAS would be among those that would be approached for the new BN. The Islamic party has already been working together with UMNO for the Sungai Kandis by-election and were even present at the recent UMNO annual general assembly as invited guests.

However, not everyone seems to be a fan of the rebranding and addition of other parties tho…

NAH, BACA:
The worrying story behind why Nurul Izzah and two BN MPs resigned from the PAC.

3. MCA are threatening to either leave or dissolve BN altogether

The MCA-UMNO relationship are having some serious issues that seem as tho it’s straight from some Hong Kong love drama. You know how sometimes there’ll be a couple that end up arguing a lot because one of them thinks the other is seeing someone else? Yeah well basically that, except the third party is PAS. The head honchos in MCA seem to be quite annoyed with how buddy-buddy UMNO are getting with PAS, and have come out to state their opposition towards working together with PAS. MCA president Liow Tiong Lai had been vocal about it for awhile now, saying this back in September:

“BN upholds the principle of moderation. If any of the component parties, including Umno, move towards the direction of racist, religious, theocratic or extremist politics, then we will only have two choices. The first choice is to dismiss BN, as it is no longer a racial harmonious coalition. The second choice is to kick Umno out,” – Liow Tiong Lai, as quoted by Malaysiakini Things have only since went downhill like this writer’s grades in high school. In light of Zahid’s plans to rebrand and restructure BN, MCA deputy president Wee Ka Siong said that Zahid’s plans were made without consulting MCA in an effort to also tie-in PAS into the coalition. As a result, Wee echoed his president by threatening to end their relationship with UMNO.

Nazri meanwhile has tried to calm things down by saying that any decision about PAS’s entry will be decided by all component parties and not just UMNO. However, if MCA does end up leaving or even dissolving BN, they wouldn’t be the only guys around trying to make it out there without UMNO’s support. In fact, head over to Borneo, and you’d find that…

4. BN in East Malaysia is no longer a thing

With BN losing in this year’s general election, it had only been a few months since the defeat when the Sarawak-based parties that were in BN decided to pull out of the coalition. In it’s place is the new Gabungan Parti Sarawak, which consists of all the former Sarawak BN states: Parti Pesaka Bumiputera Bersatu (PBB), Parti Rakyat Sarawak (PRS), Progressive Democratic Party (PDP) and the Sarawak United Peoples’ Party (SUPP).

“The component parties of Sarawak Barisan… have made a unanimous decision to leave Barisan to form a new coalition… known as Gabungan Parti Sarawak. The decision was made after much deliberation, reflection and due consideration, taking into account the country’s current political developments post-GE14,”- Sarawak CM and PBB president Datuk Patinggi Abang Johari, as quoted by The Star 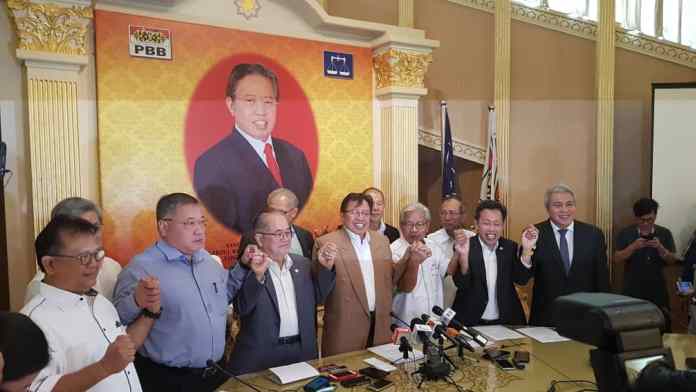 The leaders of the Sarawak-based parties during the announcement of the Gabungan Parti Sarawak. Image from Sarawak Voice

UPKO would later go on to side with Warisan in Sabah to help them form the state govt. PBS and PBRS meanwhile would join forces with STAR and UMNO Sabah to form a new coalition for the state called Gabungan Bersatu Sabah. Despite the drama, Barisan Nasional remain a force to be reckoned with

Now we know some of y’all may not necessarily be a fan of BN and might choose to ignore news about them (which also means you’re probably not reading this but okay). However, they remain the country’s biggest and main opposition bloc, and as such their decisions may still influence the rakyat. We should therefore pay close attention to what’s happening in the alliance.

Besides, this is the first time they find themselves as the opposition, so it’s perhaps normal for them to take a while to find their footing. Like cheese, it takes time for something to uh, ferment into something good. Remember how high hopes Pakatan Rakyat had only for their own internal struggles to rip them apart? Well, it’s successor Pakatan Harapan now find themselves in govt. We’re not saying that the next iteration of BN will win GE15 tho, but what we are saying is that maybe, just maybe, change can be good for the ailing coalition…. right?