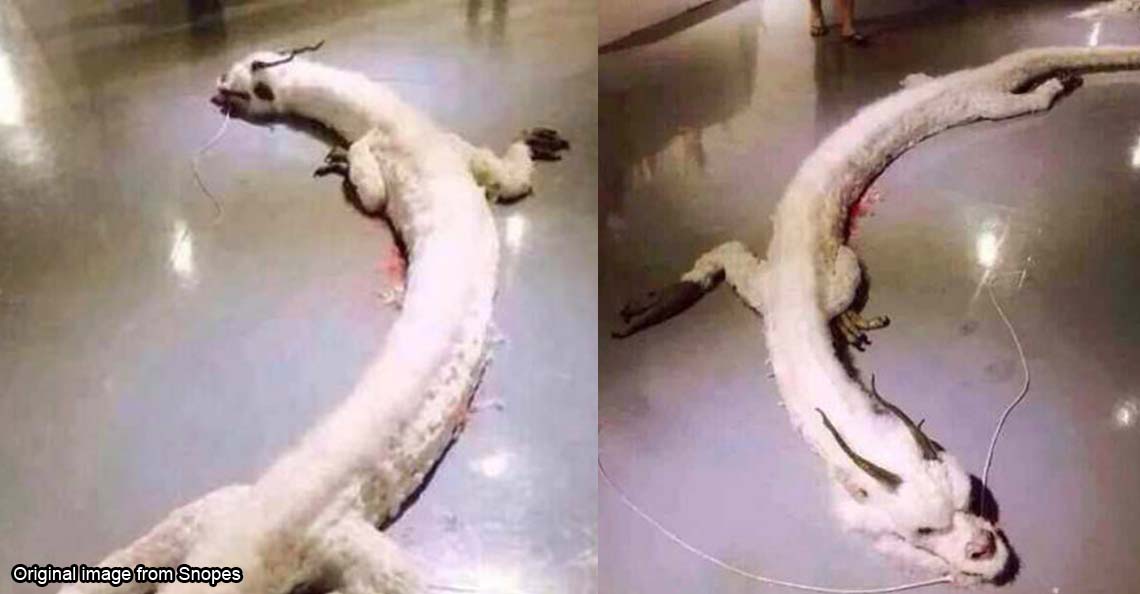 If you’ve spent even five minutes online, you would be no stranger to “true” stories of some horrible crime which almost happened to someone’s sister punya neighbor punya dog punya cousin punya son-in-law…..followed by a warning. Or perhaps, you might see some legit-looking news reports on your Facebook feed only to find that the site recycled news that’s four years old.

The problem with these viral stories is that sources are usually fake or unverifiable, but thankfully there’s a site that’s been researching and debunking these stories since 1995 – Snopes.com. Because part of CILISOS’s daily activities is to look for interesting stories, Snopes has become our go-to site for checking up on how true a particular story is. And over time, we’ve found some pretty interesting ones that have been proven to be false.

Here are 7 of the most Malaysia-related ones that Snopes has debunked.

Back in 2015, a series of photographs of a dead animal started circulating around the internet. Why was it a big deal, well check out the pictures below.

As the story goes, the owner of a fruit orchard in Semenanjung Malaysia shot this creature after he found out this creature had been eating his rabbits. Mana tau the creature also got fur like rabbit.

Snopes snoped the poop out of this when they found out that these pictures had been going around the internet before, and the story was that this same creature was found by a fisherman in Mongolia in 2014!

“Was this dragon killed by a fisherman in Mongolia in 2014, only to come back to life and steal rabbits from a farmer in Malaysia in 2015?” – Snopes

Sadly it wasn’t a dragon la. Heck it seems that it wasn’t even a real animal because they found a video which showed that the whole thing was actually a sculpture which some flers made! 2. Tsunami orphans for sale in Malaysia? Like these kids who are part of a Thai orphanage which was set up to specifically care for tsunami orphans. Image from Thai Children’s Trust UK’s YouTube video.

But it seems that not everyone was sympathetic to these kids. In January 2005, it was reported that human traffickers may have been targeting these orphans. And apparently it was also reported that our IGP at the time received an SMS offering 300 of these orphans for sale in Malaysia!

Unfortunately, this was a rumour in which Snopes wasn’t able to verify. They mention that UNICEF did confirm that tsunami orphans were being trafficked, but whether the SMS itself was real is debatable.

We all know that the MH370 incident has been nothing short of controversial, but sadly, with it came some conspiracy theories as well.

For example there was this one website that claimed that MH370 was actually attacked by Mossad, the Israeli version of CIA (though it seems that the article has since been edited).

“Stolen passports were used by unknown individuals to apparently board the jets. The use of two stolen passports has been confirmed. Who else is there to suspect other than the Mossad? It is that entity alone which has a history of committing such high crimes through the use of forged identities.” –  nodisinfo.com

And what Snopes usually does is have an article dedicated to debunking a claim/rumour. “That article was just another spoof from NODISINFO.COM, a website whose stock in trade is satirizing far-out conspiracy claims by publishing outlandish versions of them (frequently featuring “zionists” and “zionist cabals”).” – Snopes

And also another claim that the MH370 tragedy happened over a patent (something like an ownership license over an item). As the story goes, 4 out of 5 people who owned this mysterious item were on MH370, and the fifth person was involved in making the plane go missing. But Snopes debunked it too by checking the names of the people in the article and comparing it to the passenger manifest of MH370.

A quick search on Snopes also brought up at least 6 other different stories about MH370. Among them are some articles which debunk sightings of the aeroplane and pilot.

Some of us would remember the very tragic rape and murder of Canny Ong back in 2003. The case surrounding her murder dragged on for years before her murderer, Ahmad Najib Aris, was sentenced to hang in 2005. It was also in 2005 that a rumour started circulating that Canny Ong’s murderer drugged her using a concoction made by combining Coca-Cola and MSG. The rumour also said that Coke+MSG could also serve as a aphrodisiac, causing a person to feel drowsy and excited.

And considering that Coke is one of the most popular and readily available drinks around, and MSG probably being the closest thing to replacing rice as a Malaysian staple, this claim is actually pretty scary. Just an example of some of the foods that contain MSG. Image from healthybliss.net

So is this true? Well, far from it according to Snopes. They mention that MSG can cause headache and nausea amongst other things, BUT only to some people.

“Only some people experience adverse reactions to MSG. Spiking the drinks of random women in hopes of hitting upon one who is MSG-intolerant wouldn’t be a very effective strategy for someone looking to incapacitate the unwary, especially considering that those who are susceptible to the chemical could experience any of the symptoms listed, and thus the potential rapist could just as easily end up with a woman who develops a headache, feels nauseous, or experiences chest pains rather than one who gets drowsy or excited.”  – Snopes

They also provide links of Coca-Cola saying that the concoction is not an aphrodisiac but the links weren’t working anymore. But as for whether a combination of Coke+MSG was used on Canny Ong, that isn’t true either because Canny Ong was actually threatened with a knife by her attacker.

NAH, BACA:
Should you sue your online haters for defamation or complain to the MCMC?

5. Eggs on windshield used by robbers in Johor Bahru?

If you’ve ever been in a family Whatsapp group, you’ve probably received messages about “what new tactics robbers are using” at least once. For example, this one story.

If you are driving at night and are attacked with eggs, do not operate the wiper and spray and water. Because eggs mixed with water become milky and block your vision up to 92.5%

Then you are forced to stop at the road side and become a victim of robbers. This is a new technique used by robbers in Johor Bahru.

Please inform your friends and relatives!! This, and many other warnings about robber techniques are said by Snopes to be not true. The story above has many variations, including the version above that mentions this took place in Johor Bahru. Also their attempts to find actual news articles about this egg tactic actually being used by robbers came to nothing.

They also question how the article was specific enough to say that it will block 92.5% of the driver’s vision. And also how a few eggs could obscure the driver’s whole view.

“It would take a number of extremely well-placed eggs (a hen’s typical offerings aren’t that big) to splat a windshield so thoroughly as to completely impair the driver’s view and force him to stop immediately.” – Snopes So yea, seems a little too difficult to pull off on a moving car la.

6. The romantic story of a couple on the brink of divorce that originated from Malaysia

Some of us may have heard of this story before, of a man who wants to divorce his wife because he’s found someone else. But the wife asks him to carry her to her door every day for a month, and after the month passes, he commits himself to her again.

It’s so popular if you Google “carry wife to door” you’re gonna get a lot of the same story. Heck there’s even a short film about it on YouTube.

Snopes says this story has been going around the internet for years, but their first encounter with it was from a post that originated from Malaysia.

As touching as the story is, it seems that this is a viral story that cannot be proven. For one, Snopes say the source may have come from Malaysia, but no one knows for sure. And by that virtue, whether the people in the story even existed.

Variations of the story also exist, with some versions stating that the wife passed away as soon as the husband realised that he still loved her.

So Snopes doesn’t say that this story is fake (since we don’t know), but they do classify it as “Legend”. So for those of you who do love this story, don’t worry, they have become legendary.

So back to tsunamis. Aside from orphans being sold, another story popped up saying that there was gonna be another tsunami. And the country that was in the most danger was Malaysia!

“Hello there. I just wanted 2 let you know that please stay away from the beaches all around in the month of July. There is a prediction that there will be another tsunami hitting on July 22nd. It is also when there will be sun eclipse. Predicted that it is going 2 be really bad and countries like Malaysia (Sabah & Sarawak), Singapore, Maldives, Australia, Mauritius, Si Lanka, India, Indonesia, Philippines are going 2 be badly hit. Please try and stay away from the beaches in July. Better 2 be safe than sorry. Please pass the word around. Please also pray for all beings.” – Email of tsunami on Snopes

In case you’re wondering, solar eclipse is mentioned because of the supposed gravitational put it would bring, which would affect the surface of the earth.

Well this rumour has been proved false simply because the supposed date for the earthquake and tsunami to take place has already passed. It’s been nearly 6 years since then, and still no news of a tsunami.

But aside from that, Snopes also looks into other things like how earthquakes are actually really hard to predict, and how gravitational pull (by an eclipse or otherwise) MAY be a factor for earthquakes, but usually it’s because of stuff going on under the earth’s crust.

How not to kena tipu by things you read online

Because there are TONS of fake stuff going around, whether on Whatsapp (which is possibly the worst of the lot simply because there’s often no source to the information), or Facebook, or Twittergram. In fact, our editor himself has had quite enough of getting a lot of unverified news, or even myths from his relatives.

One recent example of these internet hoaxes was this video of a supposed Malaysian VIP sinking on some…boat thing. In this case, The Star was the one who eventually reported it to actually be from India!

And usually it’s pretty easy to fact check something. At CILISOS where we do get our fair share of rumours, we usually does do a quick Google search to see what was the source of the rumour. Aside from that, if there’s an image, we do a reverse search on Google Images to see what else turns up. Just go to Google Images and click on the camera logo beside the search bar.

And if all else fails, there are sites like Snopes and many other myth-buster websites to help us. It’s obviously a lot harder than just believing everything that we read online, but if it helps stop the spread of wrong information, why not right?

In fact, we do some myth-busting of our own sometimes. So if you’ve come across some strange looking Malaysian news, why not check if we’ve covered it before? And if we haven’t, let us know and maybe we could investigate. Because c’mon, y’all trust us right? 😉