Let’s start with a poll.

Recently, one of the CILISOS writers’ friends forwarded a message to her on WhatsApp about upcoming water supply disruptions in Petaling, Klang/Shah Alam, Gombak, Kuala Lumpur, Kuala Langat and Hulu Selangor starting from 6th March 2019. 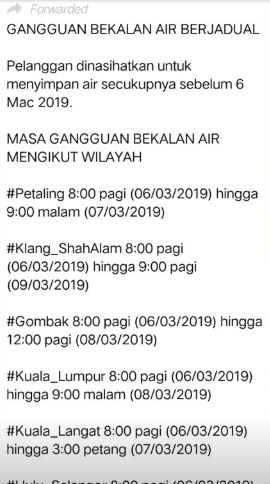 Yeah, we know that part of the forward message has been cropped out due to space constraints, but we’re not gonna bother telling you because…

Syabas said that it’s fake and… was recycled from last year’s water cuts?!

Syarikat Bekalan Air Selangor (Syabas) responded to the viral message with a press release, stating that the message is NOT TRUE. Syabas added that it didn’t give any notice about the falsely claimed water cuts, which were actually referring to the water cuts schedule in 2018.

Its advice to the public is to ignore and avoid spreading the fake news, and instead refer to its mobile app Air Selangor (available on Google Play/Appstore) or its website for any updates on water supply. Being the future award-winning kepochi writers we are, we decided to dig a little deeper into Syabas and found out that its Twitter page actively gives updates on water cuts in specific areas. So perhaps, check with Air Selangor first before you share anything related to water supply in Selangor. Okay?

This viral message was not the only fakey about water supply.. and some get pretty weird too.

We tried checking the official fake news debunker Sebenarnya‘s website for any debunking of this… But tak ada. What we could find out was that plenty of water supply news have been clarified in the past, which means that fake water cut news seems to be a pretty common thing in Malaysia, including Selangor, Sarawak, Pahang and Perak.

Apart from the usual burst pipe and renovation stories… we came across some interesting ones… like ‘a pig carcass “polluting” the Negeri Sembilan water supply‘, ‘Kelantan might sink because of a dam in Thailand’ and ‘a water pump house causing a landslide‘?! 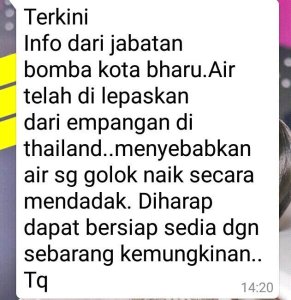 Even if a WhatsApp message claims that it’s from a jabatan, it still needs official clarification. Screenshot from Sebenarnya.

There was even a viral message that linked water cuts to food poisoning in Klang Valley in March 2018. 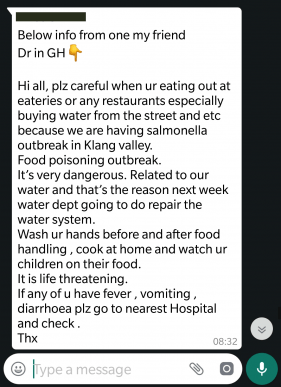 Huh.. Mana boleh?! In response to this, the Ministry of Health (MoH) said that the message was untrue and unbelievable.

Yeah, you may think “what?! So crazy lah!”, but research has revealed that fake news is more shareable becos it’s not burdened by the truth. The more bizarre it is, the more eye-catching it is. Perhaps, the following quote on fake news could explain this:

“As one alarming example, an analysis by the internet media company Buzzfeed revealed that during the final three months of the 2016 U.S. presidential campaign, the 20 most popular false election stories generated around 1.3 million more Facebook engagements—shares, reactions, and comments—than did the 20 most popular legitimate stories. The most popular fake story was “Pope Francis Shocks World, Endorses Donald Trump for President.” – researchers David Z. Hambrick and Madeline Marquardt wrote in the Scientific American.

Now, you may wonder… With fake water cut news going to such extents, especially in Selangor, how is Selangor’s actual water supply sitch like?

Every state is supposed to have emergency water balance but Selangor.. uhh..

The Energy, Green Tech and Water Ministry (KeTTHA) claimed that Selangor has been having the highest number of water disruption cases with a recorded figure of 259,537 cases in 2016, waaaaaaaaayyyy higher than Penang’s 3,778 cases and Melaka’s 2,267 cases.

Although our previous articles have cited some reasons such as leaky pipes, stolen water, rain avoiding catchment areas, development and ineffective management of state water services, the Association of Water and Energy Research Malaysia (AWER) president Piarapakaran wrote in his letter to NST that the only reason Selangor has a water crisis is… low treated water reserve margin.

What’s that? Well, Piarapakaran defined a reserve margin as the “extra distributable capacity after catering to current demand” (full capacity – current demand = extra capacity), which allows a treatment plant to provide emergency water if there’s a sudden rise in demand or drop in supply. Thus, ensuring that disruptions don’t affect people so much. It’s something like saving some amount of money for a rainy day. Oh dam… Image from The Star.

Therefore, Piarapakaran and KeTTHA suggested some solutions such as creating a larger water supply by building new water treatment plants, reducing the loss of non-revenue water (unused water gone to waste becos of stuff like leaky pipes) and reducing the use of water per capita. Okay, now the third one may sound a little preachy and we at Cilisos usually try to avoid preaching, but since #cilisoslovesyou, here’s a little something for y’all to tapau.

Similarly, the authorities and rakyat each have a role to play in curbing the spread of fake news before others get infected by it. 😉 *drops mic* #ihatecilisos