PS: Sorry Ugaiz. This article focuses on Peninsular Malaysia and won’t be taking much about Sabah and Sarawak cos that would be another topic altogether 🙂

Malaysia has often been called a ‘multiracial success story‘. Just think back to the times in high school where just about every Moral class had a lesson that used Ali, Ah Chong and Muthu as an example. 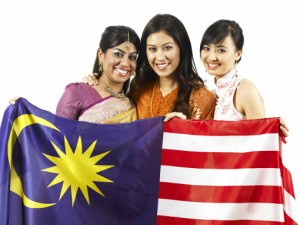 That being said, it hasn’t always been successful with incidences such as May 13 and more recently the Low Yat incident. In fact, just the other day, this writer came across the following headline on Facebook:

Click to read the article at Malay Mail Online.

Such racially charged comments and conceptions aren’t uncommon in Malaysia, with examples such as Mahathir calling the Malays lazy, Ridhuan Tee telling the Chinese not to be greedy and people assuming Indians are alcoholics up to no good. In fact, race problems have actually been around long before Malaysia was even a country! With race perhaps one of the biggest topics on our lips, where did this idea come from anyway?

OMG could it be from the British campur tangan? Back in the 19th century, the British were in the midst of slowly taking power away from the Sultans of Malaya. Then to muddy the waters further, they brought in 84,000 foreign workers from China and India by 1880 (Hello Muthu! Hi Ah Chong!) who didn’t have pre-existing loyalties to the royals.

By 1921, there were roughly a million Chinese people in Malaya and half a million Indians by 1931. You might not think that’s a big number compared to 1.5 million Bangladeshi’s, but keep in mind the population back then in Peninsular was around 3.7 million. So suddenly the country is over 40% pendatang! But why did the mat sallehs bring them in?!
Well, what the Brits were doing was called colonialism – and it isn’t just exploitation of land, but of people as well. How did they do this? Well, have you heard of Dividing and Conquering? It’s basically the practice of rulers making their subordinates not like each other enough that they can’t unite to remove said ruler.
In Malaysia unfortunately, this took the tone of racial grouping. Yin Shao Loong from Institut Rakyat mentions in this video how the Brits grouped people back then into 3 main groups based on ethnicity and gave each ethnic group the impression that the British were going to be their ‘protectors’. The Brits then promoted the idea that their interests as a group were being threatened by not the Brits themselves, but rather the other ethnic groups. 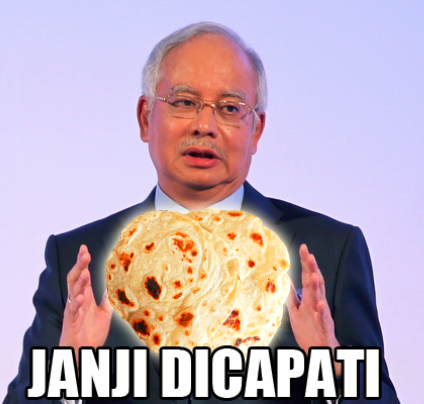 Why does this all sound so familiar!?

And worse, they apparently stereotyped us -_-“

To strengthen the divide, the British also formed several stereotypes linked to each racial group.

” The notion of race, which is an attempt to differentiate people biologically, was brought into Malaysia by the British colonial administration.” – Rie Nakamura, School of International Studies Universiti Utara Malaysia 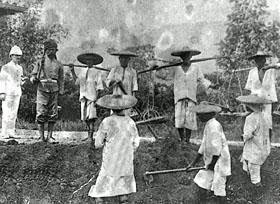 Chinese workers in a mine while the mat salleh looks on. Pic from iumwmalaysianstudies.blogspot.my

“Whenever money is to be acquired by the peaceful exercise of agriculture, by handicrafts, by the opening of mines of tin, iron ore or gold, amidst savage hordes and wild forests, there will be found the greedy Chinese,” – Thomas John Newbold, an English researcher, said of the Chinese in 1839

EXPLANATION: The Chinese were brought in when the Brits needed labour to work in tin mines. The Chinese groups that were running the tin mines got so good at what they were doing that the British felt threatened. In fact, this study points at how the colonialists had a ‘grudging admiration’ for the Chinese. They were also groups of Chinese who acted as a sort of middlemen between British aristocrats and the poorer native groups, and this gave the impression that the Chinese had a much larger control of the economy than what was the truth.

“For most Europeans, the dominant view of Indians was as a source of cheap and docile labor,” – Charles Hirschman of Comell University in an academic paper

EXPLANATION: The Indians were brought in to work in the British-owned plantations, with the Brits specifically bringing in Indians as India was also under British rule. There is a suggestion that with the severe living conditions of India back then (there were soooo many famines in India at that time that 50 million Indians died collectively), working in a rubber plantation was better comparatively and so there wasn’t much of a complaint. 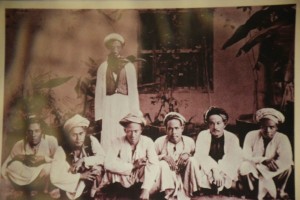 A group of Malay people wearing an 1800s version of the baju melayu. Pic from gywwwhistoryproject.blogspot.my

“Malays have been portrayed as docile, loyal and dependent people who have a weak intellectual capability, and the well-known stereotype of Malay people was their indolence or laziness,” – Rie Nakamura, UUM lecturer, in an academic paper

EXPLANATION: The native Malays already had enough to live well thru fishing and paddy, and so refused to work for the British, making the British think it’s because they were lazy and too comfortable to seek ‘progress’. In fact, this stereotype was very thoroughly debunked in the 1977 book ‘The Myth of the Lazy Native‘ by Syed Hussein Alatas. This book looked specifically at the stereotype that Malays were a lazy group of people. Yin Shao Loong meanwhile adds that even when the local Malays did began to venture into other industries such as rubber plantations, the British basically made sure that they stuck to planting paddy to not interfere with their own business.

And sadly, it kinda worked 🙁

NAH, BACA:
The British soldier who disguised as a Malay to infiltrate Japanese WWII warships

While we might have Merdeka-ed from Brits, we didn’t Merdeka from their thinking

Speaking of Merdeka, here’s a clip of the declaration (and used as the source for our featured image). Notice how people grouped up according to the racial groups?

Okay so prior to the #Brexit of 1957, the British were a little worried about giving Malaya independence. This was mainly because they still had economic interests, and wanted to make sure that the Chinese and Indian labourers remained working here. Eventually, Tunku Abdul Rahman did come to terms with the British for independence.

However, remember earlier in this article we mentioned how the British had put forward the idea of racial interests to society? Well, that continued to happen, just that it wasn’t the British doing it.

“Once the anti-colonial movement began to heat up, what happened was that the functions of protecting these 3 racial groups was transferred over to 3 political parties that the British themselves set up and these were UMNO, MIC and the MCA… They were effectively based upon the original model established in British colonialism of protecting races from not the British, but from each other,”- Yin Shao Loong in a video

One of the researchers we mentioned earlier, Rie Nakamura damn rajin somemore, looked up the Bernama online Archives since 1975 and found 984 articles with the word “racial” in the headline while 268 articles had the word “ethnic”.

“The majority of the race articles discussed issues of national integration, racial unity, efforts to decrease racial sentiment and the eradication of racial antagonism. The word race also connotes something negative. For example, “don’t raise issues that can incur racial wrath”, “do not stoke racial tensions”, “do not vote along racial lines” or “do not attempt racial politics”. Similarly, headlines such as “don’t play up racial issues for political mileage” can be seen, along with “don’t create racial tension”, “do not tinkle with racial politics”, “do not exploit racial issues to seek popularity”, “do not stir up racial sentiment” or “do not harp on racial and religious sentiments”, and so forth.” – Rie Nakamura, Malaysia, a Racialized Nation: Study of the Concept of Race in Malaysia

In a seminar about the ‘The Myth of the Lazy Native‘, Malay historian Syed Farid Alatas talks about how these stereotypes that started with our rulers (colonial and post-Merdeka) have unfortunately been internalised by us.

We’ve got the New Economic Policy (NEP) which literally ASSUMES that the natives (Bumiputeras) aren’t as capable with the goal of economic equality (but that’s a story for another day). Then there’s the social contract or Article 153 which allowed for the segregation of Malaysians into Bumiputera and non-Bumi (ugaiz can read more about the social contract here).

Just the other day a certain new political party was formed with membership open to just Bumiputeras (although there were valid reasons for this, which we talked about here). Dr Yeoh, a lecturer at Monash University, brings up how we’re basically reminded of our race in everyday life, continuing these old ideas.

“We are reminded about our race all the time through the forms we fill up, we see it in newspapers being used all the time uncritically… In everyday discussion, a host of users use that word uncritically and the younger people would think it’s factual,” – Dr Yeoh, in an interview 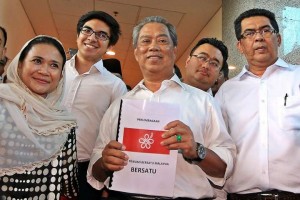 The new old kids on the block. Pic from Straits Times

So how can Malaysia truly free ourselves of racism? The British weren’t the only colonisers from the West who had implemented such ideas, and these ideas aren’t even ‘British’. In any case, the ‘divide and rule’ strategy has been applied in countries such as India, where policies were set up that had groups of Indians pitted against each other, with the British making themselves be seen as necessary peacemakers.

“Between 1860 and 1920, the British segregated Indians by caste, granting administrative jobs and senior appointments only to the upper castes. Social unrest during the 1920s led to a change in this policy. From then on, the colonial administration began a policy of positive discrimination by reserving a certain percentage of government jobs for the lower castes.” – Wikipedia

Today, although it has recognised the need to reform, the caste-system in India is still very much alive.

In neighbouring Indonesia however, which has a long history of persecuting the Chinese, there has been a wave of progression.

“After the fall of Suharto, numerous discriminative laws were recalled and others promoting unity were passed. President Habibie passed legislation requiring the elimination of the terms pribumi and non-pribumi (native Indonesian and non-native) in 1998. In 2000, the next president, Abdurrahman Wahid, recalled the legislation forbidding the practice of Chinese culture and use of Mandarin Chinese in public. In 2002, Megawati Sukarnoputri declared Chinese New Year a national holiday.” – Wikipedia

Today, the governor of Jakarta is a Chinese Indonesian, although to be honest, both the government, and the Chinese community had roles to play in making racial unity happen. For instance, many Chinese kept their “Indonesian” names even after the law requiring them to have one was changed. 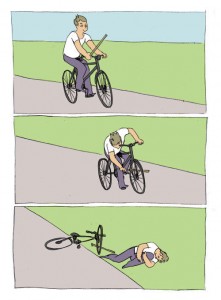 And at the end of the day, perhaps that’s what it takes. Dr Yeoh mentioned in our interview how continuing this idea of race among Malaysians would have no winners in the end. In Malaysia, racial policies in our law, and messages in our education strengthen the pre-existing feelings on the ground. The idea of race becomes a social barrier preventing unity.

On a idealistic level, many urban Malaysians support the idea of unity. You see it in our Petronas Ads, our Merdeka status updates, and our comments on articles. However, in our day-to-day conversations, you’ll still hear racial statements that sound very much like the stereotypes left behind 70 years ago, or worse still… new stereotypes about new foreigners.

So while it would be nice for Malaysia one day to be free of racial policies, perhaps at the very least, WE can break the vicious cycle by judging each of our fellow Malaysians as individuals, and not as a stereotype defined by some angmoh fler’s grandfather.