Over the past couple years, the upheavals within UMNO – such as Muhyidin’s sacking, Mahathir quitting, and the resignation of UMNO branch leaders – have led many people towards two possible conclusions: These fellas joining up with the Opposition, or forming a new party that’ll be free of race politics and corruption in order to SAVE TEH CUNTREHHHHH!!!!! As you might expect, early public opinion on Bersatu veered towards a word that starts with “S” and rhymes with “Stupid,” based not just on comments we found online…

…but also in conversation with people like CILISOS editor Chak and my dad:

We could end the article here and go back to writing about 1MDB or something, but a little something caught our eye… With the reveal of a party that basically UMNO 2.0, you’d expect DAP’s Lim Kit Siang to react like this: 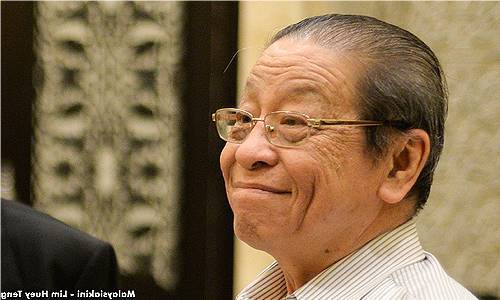 Yup, Lim Kit Siang went as far as to call Bersatu a “possible game-changer“in the next general elections. And if you look at the names of the 7 Bersatu founding members, you’d also see Syed Saddiq Syed Abdul Rahman – also known as Malaysia’s top debater – and vocal advocate of being “Malaysian first”.

So what happened here? Did Lim Kit Siang and Syed Saddiq kena brainwash, or get paid to support what’s essentially an UMNO 2.0? Or perhaps, there’s more to Bersatu than meets the eye?

Bersatu was formed specifically to target rural Malay/Bumiputera voters… which is smart! Putting it bluntly, if you think Bersatu is racist; it’s because you’re not their target market. In an interview with The Star, Syed Saddiq says that there are voters out there who might want change, but not enough to compromise their racial identity; so Bersatu was formed to bridge that gap:

“Acknowledging the constituencies in which we will most probably be contesting. And there are still vast majorities of Malaysians, or Bumiputras, who still want to maintain their racial identity while [pursuing the reform agenda.]” – Syed Saddiq, as quoted by The Star.

In marketing terms, if your customers want sambal in their nasi lemak you’re not gonna give them tomato sauce, amirite? But if you need a second opinion, we spoke to parliamentary analyst Ooi Heng from Kajian Politik Untuk Perubahan (KPRU) and he agrees:

“In a way, the demise of Pakatan Rakyat signified the beginning of a self-defeating pattern for the Opposition. In a scenario like this, you need a new political force attempting to create new dynamism and build new momentum. You need to increase the Malay support for the opposition in a significant way. That’s where Bersatu will play its role.” – Ooi Heng, in email interview with CILISOS.

Looking back at the recent Sarawak elections, Pakatan Harapan has made several mistakes, including bringing up issues that don’t matter to their voters like the Najib/1MDB/GST thing which is only a big issue among Semenanjung urbanites. In fact, an analyst even claims that Pakatan’s big mistake in Sarawak was attacking Najib when they should have focused on Taib Mahmud instead. In marketing terms, it’s like telling a vegetarian how delicious your fried chicken is.

In this sense, Bersatu is much better poised to take on this demographic (the voters, not the vegetarians) because they should know their market better. And they’ve definitely put some thought into this since…

In a way, Bersatu is kinda like UMNO… but improved

Because the party is still really new, we’re just gonna cover the few points in the Bersatu constitution that have been publicly mentioned. The first is that leaders can’t hold on to power forever – all important positions can only be held for a maximum of six years, and nine years for the post of chairman and president. There’s also an age limit of 35 years for the party’s youth wing, in order to ensure there’ll always be new blood to bring in fresh ideas.

The second is their membership policy. If you realized, we specifically mentioned both Malays AND Bumiputeras are eligible for full membership in Bersatu because – though most of us might forget – “Bumiputeras” also include the various Malaysian indigenous groups (aka Orang Asli/Asal) – hence the name Parti Pribumi Bersatu Malaysia. Again, these are the “markets” they’re trying to reach out to. Unedited image from The Telegraph.

Don’t feel left out uNon-Bumigaiz, because non-Bumis can actually sign up as an “associate member”, which means that while you can’t contest a party post or vote, you can still be appointed into important positions. You may be surprised to know that this idea may have come from UMNO, who opened their membership doors to the Sabahan Bumiputera Chinese back in 2001. And guess who the UMNO president was at the time? Mmhmmm.. Dr. Mahathir.

In marketing terms, this is like opening a mamak which also serves spaghetti bolognese so you cover both sides of the market. But as anyone who’s ever had spaghetti in a mamak would tell you, it’s not always a good idea:

“Bersatu has made a mistake in creating and offering associate membership to the non-bumiputera. Such a policy will create hardship and political anxiety on different forms of mobilisation.” – Ooi Heng

Ooi Heng kinda has a point, since the whole idea of Bersatu is to get rural votes (are we sounding like a broken record already?) and to provide an alternative for unhappy UMNO members to join. To a certain extent, the inclusion of non-Bumi members may actually hurt their campaign, as evidenced by the problems faced by the then-Pakatan Rakyat, which is why…

NAH, BACA:
The British soldier who disguised as a Malay to infiltrate Japanese WWII warships One of the problems faced by the PKR-DAP-PAS coalition is that it created problems with voters who might support one party but not the other. For example, DAP’s voters were afraid of PAS’s Hudud stance while PKR’s supporters were afraid of DAP’s Chinese-ness, and so on. And that’s not including the conflict within the parties themselves, which led to Pakatan Rakyat breaking up in 2015. In marketing terms, it’s like opening a Halal restaurant with a non-Halal section inside.

In this sense, Bersatu is kinda threading the middle path by working with the other Opposition parties while not officially being part of any coalition. In a sense, they can work out a strategy to deny BN as many parliamentary seats as possible (click here to read why this is important) without being associated with the drama. But of course, the party is still really new now la.

For the future, Ooi Heng notes that there are three likely routes that Bersatu may take:

Ooi Heng also adds that whichever route that choose – even if they decide to fight alone – the most important thing is that they don’t end up fighting the other opposition parties:

“Theoretically, within the big family of the opposition, every political party is a competitor to each other – as long as they don’t mistake party competition as political enemies. Party competition is considered an important part of the political process as well as democracy.” – Ooi Heng

But will Bersatu live up to it’s name? Much like how PKR first started out, Bersatu kinda has an uphill battle to convince people that it isn’t just a bunch of UMNO rejects (totally not our words, ok?) ticked off that they weren’t cool enough to join the party. As it is, they’re getting flamed even before the registration papers have been printed.

But hey, what do ugaiz think? Would you support Bersatu?

If you look at it in marketing terms, everything is based on supply and demand… It would be a terribly stupid decision to make a product when there’s no demand for it. Bersatu was formed by a bunch of experienced politicians and smart people, so they’ve obviously done their market research enough to know what product would sell the best.

But the question is, what does this say about the consumer?