Last week, FGV Holdings held their annual general meeting (AGM), and something weird happened. To put it simply, three of the major shareholders did not approve of the payment for the company’s directors, and that means that the directors won’t be getting stuff like their director’s fees, claims and perks like medical and insurance.

However, they did not object to the re-election of the directors, and according to FGV chairperson Azhar Abdul Hamid, that puts them in a bind.

“The ironic thing is that we did not have any problems with the re-election of directors as all those resolutions were approved. It’s as though the shareholders still want us to be directors but do not intend to pay us,” – Azhar Abdul Hamid, as reported by MalaysiaKini. 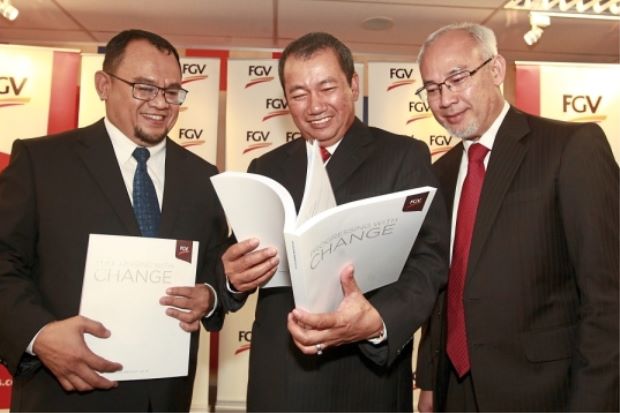 “Huh. No new shares. Wouldja look at that.” Img from The Star.

One may think that this is simply because the directors’ pays are too high, but the shareholders did not reveal the details behind their decision during the meeting, which had left the board puzzled. Some had said that the shareholders’ move seemed to point towards a dysfunctional relationship between FGV and its shareholders, while others have likened the whole thing to a parent disciplining its child in public.

So what could be going on between FGV and its shareholders? Why won’t they pay their directors? Well, those familiar with FGV might be quick to point out that…

Unlike Cilisos and Soscili (plus AskLegal), they have separate buildings. Imgs from Malay Mail and Utusan Online.

While they both have ‘Felda’ in their names, FGV and Felda are different entities. Felda was a government body established way back in 1956 as a way to lift poor people out of poverty. They do this through a scheme where they give out pieces of land to these people, and the people work that land, planting rubber and palm oil and generally lifting themselves out of poverty through agriculture.

Sometime in the 1990s, the government saw Felda as capable of standing on its own, so they stopped funding Felda. To fund itself, Felda launched several corporate bodies. One of those was Felda Global Ventures, now known as FGV. It was established in 2007 as Felda’s commercial arm, but in 2012 the then-Prime Minister Datuk Seri Najib Razak pushed for it to be listed on Bursa Malaysia, so an initial public offering (IPO) was held. Haish. Must everything also be #SalahNajib? The IPO, however, turned out to be a massive success: FGV raised $3.1 billion (RM9.45 billion in 2012) from its IPO, the highest in Asia for that year, and one of the highest in the world. As part of the listing, Felda and FGV entered into an agreement where Felda gets 15% of FGV’s operating profit, plus a fixed amount of around RM250 million a year under a land lease agreement (LLA) by putting 351,000 ha of Felda’s land under FGV. That agreement is a whole ‘nuther kettle of fish, but we won’t be going into it in this article.

Anyways, despite the initial success, things went downhill from there. Here’s a visual aid: Scraped from the all-knowing Google.

Shortly after the IPO, FGV’s shares were soaring high at RM5.39 per unit, but two years in, the value halved to RM2.85 at the end of 2014. This was said to be due to a drop in commodity prices and downstream losses, made worse by a weak ringgit. But as you can see from the graph, FGV have yet to make a recovery. Starting from 2015, FGV has fallen into a net debt situation, and its value continued to plunge, reaching a record low of RM0.64 last year.

Overall, FGV’s market capitalization had dropped from almost RM20 billion in 2012 to only RM2.6 billion last year, meaning that investors have lost more than RM17 billion in value. Last year, FGV posted a loss of RM1.08 billion, so the shareholders being iffy about paying out RM5.74 million to FGV’s directors may not sound so weird after all.

LTAT, for one, had said that their decision to reject the directors’ payment was not taken lightly, and it was done to protect the interests of its contributors, who are members of the armed forces.

“Given prevailing economic conditions and FGV’s current financial standing, we are of the view that director’s remuneration should commensurate with the current state of affairs at FGV and its prospects ahead,” – the Armed Forces Fund Board (LTAT), in a statement to the Star.

As for why they seem to be doing so badly…

FGV seemed to have made some bad (and controversial) acquisitions

Oh come on. This is what you really came for. Gif from Giphy.

When talking about FGV’s losses, it was said to be mainly because of the impairment of assets that the previous management have acquired. Through the IPO, FGV managed to get more than RM4 billion (the rest went to Felda), and a bulk of that money was used to buy out plantations and companies. However, some of them were overpriced and/or did not add much value to FGV.

NAH, BACA:
We're looking for the coldest office in the Klang Valley. Is it yours?

When the gomen came up with a White Paper on Felda, they listed six of FGV’s purchases that were over market price, for a sum of RM2.48 billion:

Pontian United Plantations Bhd was purchased for RM1.2 billion, with FGV buying out all 8.65 million of its shares at RM140 each. This gave them 16,000 ha of mature oil palm land (mostly in Sabah), a mill, and a kernel-crushing facility. While the acquisition did not strike analysts as weird at the time, BIMB Securities had then said that at RM74,800 per ha, FGV had paid too much.

As it turned out, later in 2016 several subsidiaries of the company were brought to court over land-related claims, so maybe they didn’t get 16,000 ha after all.

FGV had also spent RM655 million on four plantation companies and an 836.1 ha tract of palm oil land in Sabah from Golden Land Bhd, and while nobody said much about it at the time, one of the four companies was sued in 2017 over a land plot issue.

But perhaps the most controversial FGV acquisition was that of Asian Plantations Ltd (APL) in 2014. APL was purchased for about RM1 billion, or about RM65,000 per ha… which was triple the price other companies have offered for it, at RM20,000 per ha. Besides it being overpriced, about 40% of APL’s land could not even be planted. About 2,600 ha had trouble regarding Native Costumary Rights, and another 7,300 ha were just plain unplantable.

“The terrain is hilly and there are frequent landslides. The soil is shallow with a porous texture … landslides are common. The roads are logging ones, which cannot be used when it is raining — lorries cannot pass through, they are too slippery.” – a source familiar with the matter, to the Edge Markets.

But even before the White Paper came out, FGV had been plagued by other troubles.If you can remember, back in 2017 we did a few pieces surrounding a (somewhat political) scandal in FGV that had something to do with corruption, and some had said that it’s an even bigger scandal than 1MDB. But we won’t be going into that here because this article is long enough as it is. So if you want to read about it, just click here and here. We lazy liddat. Here, have a meme we drew during the time we saved on research.

After that was over, FGV came up with new people for their board of directors, and besides going into an overhaul in terms of policies and business plan and whatnot, they started investigations over six matters which involved three things:

Besides the APL issue (which they sued the former directors for), FGV have also conducted forensic investigations on five other issues:

So with all these going on, maybe it’s not so surprising that FGV is struggling financially. But on top of investigating all these, the directors still have to do something about FGV’s failing financial situation before it gets even worse. That’s a lot to take on, so with shareholders rejecting resolutions regarding their pay…

Will the new FGV board do all that without pay? ProTip from Cilisos writers: grass is a cheap source of carbs. Img from News24.

As of the time of writing, it is still unclear how this whole rejected pay thing will turn out. But several ideas have been put forth. For one, Azhar Abdul Hamid, the FGV chairman from earlier, had offered to waive his own fees for 2018 in return for the rest of the board getting theirs. A hefty proposal, considering his RM1.95 million remuneration makes up a third of the proposed RM5.74 million for all 17 board members.

However, it was rejected by the shareholders.

“Having taken it [the EPF’s concern] into account, I personally volunteered to waive my fees… Unfortunately, this did not result in any change. And now I regret making the suggestion but what to do. It has been done,” – Azhar Abdul Hamid, as reported by The Edge Markets.

Datuk Zakaria Arshad, a representative from KPF, said that if FGV is serious about tightening the budget, their board should only be paid half of the proposed remuneration. They could still get fees from attending meetings and other perks, but similar fees like last year is not an option.

“As a responsible investor, I think KPF needs to see its money grow. That is our concern,” – Datuk Zakaria Arshad, as reported by Malay Mail.

Lya Rahman, former general manager of the Minority Shareholders Watch Group, noted that since the shareholders had voted against the remuneration package at the AGM, the only way to undo that is to call for an extraordinary general meeting (EGM) and re-vote. However, this could be seen as a waste of money and resources. She suggests focusing on not just the remuneration issue but also engaging shareholders for better handling of issues at hand. Imma make you an offer you can’t refuse… Imgs from Bitcoin.com, Carousell and iStock.

And as the Deputy Economic Affairs Minister Mohd Radzi Md Jidin puts it, the rejection just happened, and there’s still room for discussions. So whether or not it will be a lean year for FGV’s directors, guess we’ll have to wait until they talk it out.

“It is not the end of it. This could be solved through a proper discussion by the relevant parties. It just happened yesterday (25th June), so let us wait for the next course of action by the parties involved,” – Mohd Radzi Md Jidin, to Malay Mail.