If you haven’t heard, Malaysia hosted the 16th Defence Service Asia (DSA) exhibition at the Malaysia International Trade and Exhibition Centre (MITEC), where 1,500 exhibitors from 50 nations showed off the coolest and best(est) security equipment to Defence Ministers and delegates from governments around the world.

From big guns, to assault vehicles, and even bigger guns, the DSA was a big boy’s playground. But the exhibition also offers less fatal products as well. A visit to the exhibit has our Prisons Department director-general Datuk Seri Zulkifli Omar considering adding more non-lethal weapons to their arsenal, particularly a pepper gun called JPX 4 Jet Protector.

“This weapon can also be used in the event of fights and riots in prisons. It also reduces the risk of injury to the individual shot.” – Datuk Seri Zulkifli Omar, quoted from Free Malaysia Today

Yes, because we just want to incapacitate the target, not hurt them. The director general also revealed that the current standard issue electric shock weapon can only shoot one person at a time, the pepper gun is able to shoot FOUR PEOPLE at once.

But while we’re on the topic of non-lethal weapons, we’d like to take some time to tell you about some of the other interesting choices that Malaysian authorities can consider. Starting with…

1. An invisible ray that cooks you from 1000 meters away

Imagine a rowdy crowd of trouble makers tearing up the otherwise beautiful and functional prison/ KL streets, what would be the weapon of choice to disperse the delinquents and rioters? As you may have seen before, Malaysia’s current answer is to spray them with a high pressure water cannon, which given the typical weather on an average day, feels hardly like a punishment at all.

But the water cannon can sometimes prove to be dangerous (click here to see a man get hit by a stream of a water cannon). In a German riot in 2010, a man was almost permanently blinded from the damage his eyes sustained from a water cannon. The ADS shoots a beam of heat capable of reaching upwards to 1000 meters, and it’s invisible to the naked eye. As long as you stand in the beam, it’ll make you feel like a plate of rendang being cooked in a microwave oven. This is because the ADS and microwave ovens use the same electromagnetic waves, but the ADS waves are said to be much safer. You can learn more about it in this video, or on the US Defense Department website.

2. The disco in a flashlight that will make you puke

Through amazing creativity and possibly some love for pretty lights and torture, experts have also figured out a way to incapacitate you with nothing but colourful lights. Probably inspired by the carebears. Image from archive.4plebs.org

Known as the LED incapacitor, or puke light, this handheld device has LEDs that send out a barrage of bright and coloured lights that flashes at random intervals, causing temporary blindness and even induce feelings of dizziness and nausea. If you want to see what that’s like for yourself, click here to go to the video.

But you might be thinking: If you don’t want to kena, just look away la. That’s exactly right. Wearing shades will also protect you from it, and another one of the puke light’s weaknesses is that it won’t be very effective in places where there’s plenty of light. So surprise is the winning element with the puke light, but it does come with a censor that measures its distance to the target, so that it adjusts the light intensity to avoid any permanent damage.

3. The pepper grenade that can choke you with your favourite spicy condiments

You’ve heard of pepper sprays and maces, but have you heard of a pepper spray in the form of a grenade?! In 2010, Indian unveiled its spicy new non-lethal weapon: The Chili grenade. Much like a pepper spray, it contains the spicy molecule called capsaicin, found in most chilis. But if you think you’re hot stuff, the capsaicin in India’s chili grenade is sourced from what used to be the spiciest chili in the world, the bhut jolokia.

It is said that when tested in the trials, the spicy dust from the grenade left its victims blinded and with breathing problems for hours.

“The chilli grenade is a non-toxic weapon and when used would force a terrorist to come out of his hideout. The effect is so pungent that it would literally choke them.” –  Lead scientist R.B. Srivastava, from India’s Defense Research and Development Organisation, quoted from Fox News

According India’s Home Ministry said that the grenades are much less fatal than tear gas and gun pellets, which were used to deadly effect in past riots during the 1990s. Knowing the variety of spices and chili that Malaysia has, this opens up whole new possibilities for spicy bombs. Even if we can’t choke the targets into surrendering, we could maybe sooth them with the aroma of their favourite sambal from their childhood.

4. A cannon that creates the sound of THUNDER!

That seemingly boring tube is called the Thunder Generator (Henceforth known as the Thunderator, just because). Using a mixture of flammable materials, Thunderator creates explosions, and uses the resulting shock wave either as a deterrent or to knock people off their feet. If used in a close enough range, at around 10 meters, it is actually capable of killing a person. To think that the Thunderator was originally just a loud scarecrow.

But at a range of 30 to 100 meters, the Thunderator is not fatal. Instead, it strikes fear into the hearts and minds of its targets, as they feel the sound waves hit their body. And before you think you can just hide behind a wall, the Thunderator can be modified to shoot shock waves in 90 degree angles, sending the sounds around the corner. Videos of the Thunderator in action aren’t really impressive, but you can watch one here.

A less extreme version of this acoustic weapon is the sonic cannon, which uses annoyingly loud and high pitched sounds to force people to disperse (just like that one relative during Raya/CNY/ Deepavali). You might want to turn down your volume for this:

5. A device that forces someone to… stop talking?!

Indeed, even at the supposedly least violent kind of demonstration, technology has figured out a way to stop even that. Two Japanese researchers has invented something called the speech jammer, a device that when aimed at a target, compels him or her to stop talking! 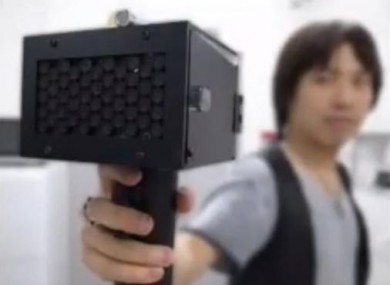 This device functions on the principle of delayed auditory feedback, a phenomenon where you brain becomes confused as heck when your own voice is recorded and played back at you with a slight delay. Sounds complicated just imagining it right? Luckily for us, Youtube is just full of random content like this. Check out this guy trying to read a children’s book while being speech jammed:

Amazingly, this technology is actually used to help stutterers overcome their difficulty. So now if Tun Mahathir starts slurring incomprehensible gibberish mid-speech, we can suspect that maybe its not a sign of his old age, but perhaps secret government operatives testing out their new speech jamming technology.

But hopefully, we won’t need to resort to violence against one another

With all this talk about non-lethal weapons, it’s strange to be thinking about not harming the person you decided you’re going to shoot anyway. But of course, some of these weapons could be a good option to subdue dangerous persons or enemies of the state. After all, we shouldn’t want to be bringing death upon everyone that is suspected to have wronged the law. 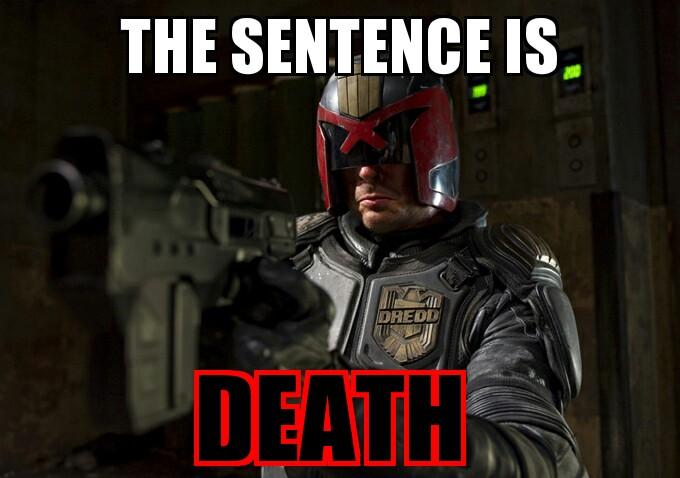 And we can’t deny that when these weapons are used upon large crowds, there’s is a chance that innocent by-standers might be caught in the cross-fire as well.

But thankfully, protests and demonstrations in Malaysia lately has generally been quite peaceful and well contained, and Malaysian authorities have rarely used such equipment on Malaysians… except for a few serious occasions like May 13th, and more recently Bersih. But with enough luck, things can stay that way, until the government gives Malaysians a reason to take to the streets again.