Back in school, the idea of being expelled might have seemed like a dishonour upon the whole village and family cow to some students, or just meh to the more badass kids. Expelled already, no need to do homework and exams, yahoo!

The Education Ministry recently announced that a total of 442 secondary school students were expelled this year for various disciplinary problems. The Ministry feels that this number is small though, compared to the 5.1 million primary and secondary students in the country. Education Minister Mahdzir Khalid said that expulsion was the last resort, however, as students with disciplinary problems are given counselling first. 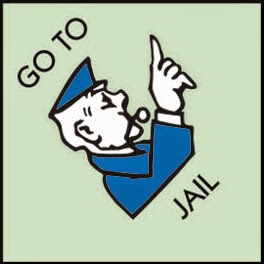 OMG when students go to prison what happens?? 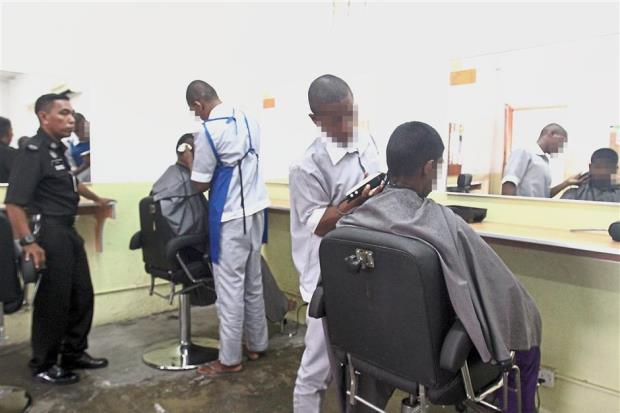 You in deep, son. Image from The Star

We think of prison as a place for hardened criminals. Serial killers, rapists, terrorists, cannibals. We hear of inmates beating up weaker ones, stealing their food, even sexually assaulting them. A student wouldn’t last in a place like that!

Have you seen one of those shows where they take problem students to prison to show them the harsh realities of being behind bars and hopefully scaring some sense into them? There’s one called Beyond Scared Straight which you can probably find on YouTube. Watch below, but It’s pretty intense…

So, what happens once they’re in? 🙁  Well, actually it’s not as terrible as that video you just watched. For one, they don’t put young offenders anywhere near the adults!! Besides, prison is only for students who have been convicted of CRIMINAL offences – note the difference – not disciplinary problems. Stuff like drugs, assault, rape, theft and murder… not truancy, smoking, vandalism, or sassing the teacher.

“The programme is being carried out in eight prisons and four Henry Gurney reform schools. There are 640 students undergoing rehabilitation programmes.” – Mahdzir Khalid, Education Minister, The Star

Here are some interesting stats we found from Unicef: So yeah, these are kids who have SEEN and DONE some things. Police records show that kids as young as 7 have been arrested! Yep, don’t think that only those above 18 can get charged for crimes. In Malaysia, the age of criminal responsibility is 10 years old according to Section 82 of the Penal Code. The difference is, those below 18 are tried in the Court for Children rather than a regular court. But only those who are 14 years old and above can be sent to prison or Henry Gurney school.

Once they’re in though, their education does not end, so haha kenot escape exams. Let’s start with the Henry Gurney schools. Both HG and prisons are operated by the Prisons Department, btw. School grounds are described as spacious with open green spaces, but it’s surrounded by high security fencing and guarded by armed prison personnel. Kids sleep dorm-style and are divided into ‘houses’, each supervised by a house master.

Unlike adult prison, where personnel are focused on enforcement and security, the HG schools reportedly encourage closer one-to-one relationships between house masters and children. Each child’s progress is reviewed every 3 months. The Prisons Department implements their ‘Putra module’ for rehabilitation, which has 4 phases – emphasizing discipline and character building, skills learning, community behavior and religion.

Here’s what some of the students had to say about being placed in HG schools:

“Hostels staff are ok. They often invite us for a music jamming session, or to play football together. Relationships between staff members and young people are good. Can always talk and hang out together.” – Report by the Ministry of Women, Family and Community Development and Unicef 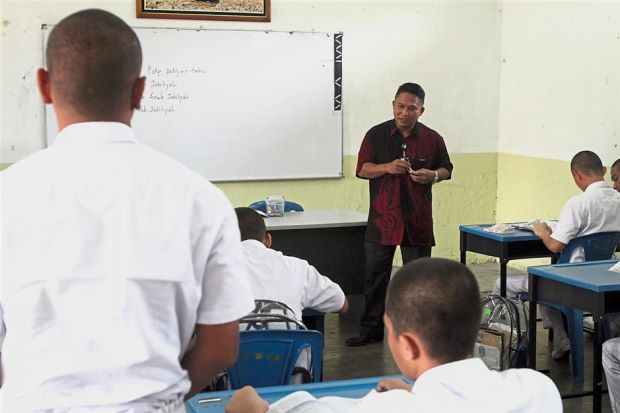 Moving on to prisons… students are placed in Youth Rehabilitation Centres operated by the Prisons Dept, but are totally separated from adult inmates. These are are high-security facilities that operate in accordance with the standard prison regime and if the kids violate prison rules, they can be given solitary confinement, reduction of diet and corporal punishment, so welcome to the adult world.

Speaking of corporal punishment, young offenders can be whipped for offences punishable by whipping, yikes. Boys, but not girls, may be whipped with not more than ten strokes of a light cane.

Ok, let’s move on to the more hopeful part. Students would also get to continue their education (whether academic or vocational), on top of religious classes and self-development courses, same as the standard modules developed for adult prisoners. The Ministry’s Special Education Sector provides the national syllabus and sends teachers, assisted by prison officers. You may have read of students sitting for their SPM papers in jail. 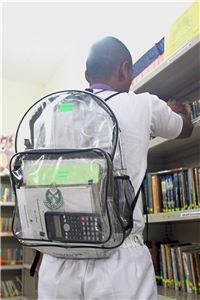 Students are given see-through school bags as a security measure. Image from The Star

Although some of the inmates are from rival gang members or have some other beef with one another, the smarter boys sometimes do help others with their studies, shared Mathematics teacher Eliza Ranee Jeremiah. She narrated how she helped change a boy’s perception on studying and he managed to obtain his SPM cert without failing any subjects.

“We have had one boy who asked what the point of studying is if he is not released. I told him that the day could come where he could be granted a royal pardon by the king and if he is holding an SPM certificate, he could get a job and support himself.” – Eliza Ranee, Math teacher, The Star

This helped changed the boy’s perception and he obtained his SPM cert without failing any subjects.

NAH, BACA:
Jack the Ripper, the infamous serial killer, could have been a Malay cook

Bear in mind, everything we’ve just described is for students who have committed CRIMES. Now, the issue being discussed is whether those with disciplinary problems should also go to jail.

But isn’t it too harsh to send a kid to JAIL for smoking or playing hooky? Out of 14,833 student surveyed, 1 in 10 non-smoking adolescents are likely to start smoking in future. Image from The Star

At the moment, the Education Ministry is just considering the possibility of prison or lock-up rehab for students with serious disciplinary problems. They wanna gather input from the Prisons Dept, and feedback from Parent Teacher Associations and NGOs, as well as legal advisers, on it first.

We have to admit there is a yuuge difference between murder and gangsterism, versus smoking or talking back to teachers. Criminologists expressed concern over the proposal, saying that the children would face negative labelling and social exclusion. They felt that the ‘fear tactic’ might not have the desired effect on the delinquent children. They also feel the intense adult rehab programmes are not suited for kids.

“There are a range of concerns that need to be addressed. These include their vulnerability to older criminals, gullibility and the potential to be groomed for criminal careers, exposure to negative environments that may hinder positive psychosocial growth, and may increase criminogenic predispositions.” – Geshina Ayu Mat Saat, Criminologist and psychologist, Free Malaysia Today

It’s true, though! Students gave insight into this culture of learning naughtier stuff from naughtier kids. 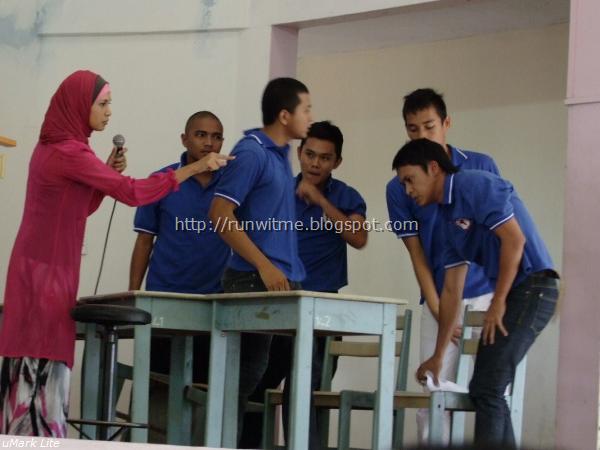 Chillax, this isn’t a real fight. It’s a tension scene from a skit based on the TV3 drama Juvana. Image from runwitme.blogspot.my

Instead, experts suggest those who were only involved in less serious disciplinary cases should just be sent for counselling. Unicef rationalised that children who are persistent offenders lack the skills and values necessary to behave in a pro-social manner, so they proposed teaching them these skills or competencies, such as getting along with other people, problem solving, anger management, etc.

After reports quoted Education Minister Mahdzir as saying that students with disciplinary problems would be taken to prison soon, people got worried, but actually he didn’t mean they have to STAY in prison!

“I simply meant that they should be taken to prisons for visits to understand the repercussions of bullying, where officers in the prison can brief them on the seriousness of the crime and the punishments involved if they commit the crime. The visit would be more like an educational or awareness tour in prison.” – Mahdzir told reporters

Oh well, that’s a whole different matter. As it is, they already conduct prison tours for students. The Prisons Dept seems… err, all too eager to assist the Education Ministry in disciplining students. “We are indeed, ready to give early exposure to the students so that they will not be involved in crime and drugs. The United Kingdom-based counselling education model can be used to increase a sense of awareness in them,” said Prisons Director-General Zulkifli Omar. In August, Kajang Prison conducted a tour for problem students. Image from NST

Talking about tours right, in August, 53 schoolboys with various disciplinary problems were picked to go on one in Kajang Prison. During the tour, they were fed the same food as prisoners – white rice, a piece of fried fish and a vegetable dish, a banana, and black tea. On top of that, they were made to watch a video of whippings (ughh) and photos of the hanging room (arghh).

It’s still scare tactics la, but at least it’s a short tour and the students can go home afterwards, unlike many young offenders who’ve landed behind bars for the long haul.

But you know what, the Prisons Dept sends cops to schools show regular, non-problematic students those freaky whipping demos anyway, so, what the heck right? They probably just like scaring kids. 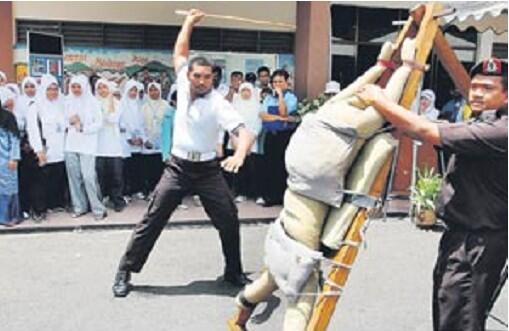 We can imagine the schoolgirls cringing. Image from headsink on Twitter

We remember the recent case of the 15-year-old student from Klang who hung himself after being expelled from school for threatening other students. For some of these kids, the explanation is not as simple as bad people just being bad. Perhaps some of them are hurting, or depressed. Perhaps there’s more than meets the eye.

Scaring them may not be enough, it may not even work for everyone. After all, in spite of these frightening school demos, crime still happens. Perhaps it’s up to families and the community to detect these problems in youngsters early and intervene before the end up in prison! OR WORSE…

or worse – expelled. Image from giphy.com