As you may have already known, there have been pictures circulating around the Internet on these persons under surveillance (PUS) who should be under mandatory home quarantine after returning from overseas. You may have seen a picture of this makcik… ..a picture of this lady in Penang… 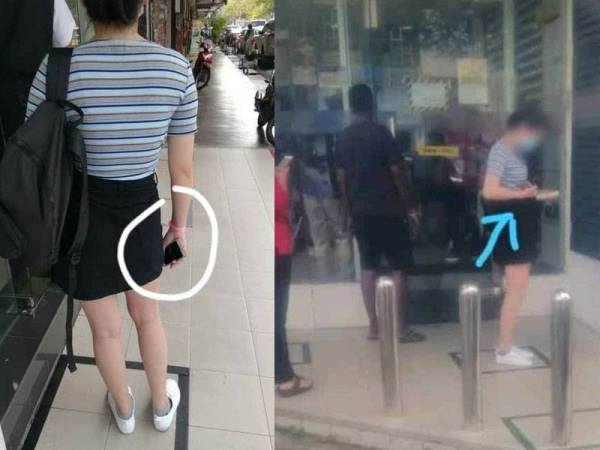 …or even a picture of this bracelet that was found on the floor of the KLIA. Seeing as there are still Malaysians that are still blatantly ignoring the standard operating procedures (SOP) and guidelines, the government has decided to reimpose the compulsory quarantine for people entering the country starting July 24 at designated places like hotels.

So, this got us wondering what it’s like to be under a 14-day home and hotel quarantine for returnees. The first thing we learnt was…

1. If you’re quarantined at home, your whole family might kena quarantine as well 🙁

Nusra who recently returned from London on June 8 was only quarantined for about 3 days and was then allowed to continue her quarantine process at home. When the Recovery Movement Control Order (RMCO) kicked off on June 10, returnees were allowed to be under home quarantine under the condition that the MySejahtera application was downloaded to keep track of them.

When she was allowed to return home, she immediately quarantined herself from her family and ensuring no physical contact was done until her quarantine period was over. Well, it’s not like she can’t see her family at all. She could but they are expected to quarantine however long she had to as well.

Same-same but slightly different. Gif from Erin Carr via Pinterest

Azraa, on the other hand, has been taking extra precautions like not having to share utensils with her family and washing her laundry separately from her family.

Another interviewee, Alyssa even took a step further by staying at an empty apartment just so she could isolate herself from her family until her quarantine days are over.

“I decided to quarantine at an empty apartment prepared by my dad and isolate myself from my family during my days of quarantine.” Alyssa to Cilisos.

And, based on their stories, home quarantine is somewhat similar to staying at home during the MCO. But unlike the MCO, the only place you can roam around is in your room.

But you may have already heard stories like this by now la. So let’s move on to other points such as…

2. Returnees may need to bring their own detergent and… PEN?!

Snow mentioned that the standard procedures, of course, includes wearing a face mask and face shield at all times. Another important thing to bring along after touchdown in KLIA was a pen. And that’s because there were a lot of documents needed to be signed and filled out.

Make sure you have a pen! Credit to Pikotaro official channel

As a student undergoing quarantine at Holiday Inn Express, Snow mentioned that there are certain necessities to pack ahead of time for extra comfort at the hotels like:

“Since touching down at KLIA, all shops are closed and everyone is immediately escorted all the way to their respective quarantine centres.” – Snow.

Jay Perera Malagamuwa who was recently quarantined in Grand Millennium, Kuala Lumpur shared that friends or family members are allowed to deliver items you want to the reception but, unfortunately, food is not allowed. But he also added that you can kautim this issue with hotel staff tho different hotels and quarantine centres may have different procedures la.

Kesevan Veloo who recently returned from Japan explained that he was thankful and lucky enough to have a hotel prepped with proper basic necessities like shampoo, soap and even detergent. Unfortunately for his friend that returned before that said that none of such was prepared.

“He had to resort to washing his clothes with the shampoo and soap he had brought with him.” – Kesevan to Cilisos.

Besides that, he said that the process was quite efficient the moment he checked in. Although food was served, personal care like laundry had to be done in their respective hotel rooms – no laundry services were provided whatsoever. Cleaning services were also not allowed unless it was absolutely necessary.

3. Getting creative with your children to keep them entertained during the quarantine

Many returning to Malaysia are not only students but also parents and families as well. Although it was mentioned that each individual is only allowed to be quarantined in one room but that is not the case for those with families and children since the guideline states that married couples are allowed to stay in the same room together.

See, just as with staying at home with kids during the MCO, undergoing quarantine with kids can be challenging. In her Facebook post, Anis Hamiza listed down some extra steps she took to ensure that they are safe and secure. For one, she mentioned that the hotel staff was efficient enough to provide dietary food specifically for children like fried rice, lasagna, waffles and pancakes.

Another thing she pointed out were the things she prepared to entertain her child during such times.

She even brought a play mat for her child. Img from Anis via Facebook

However, she mentioned that it is not exactly necessary to bring such items depending on how each individual child is different from another so a parent should understand what to and not bring to ensure that they are always occupied during their stay at the hotel.

NAH, BACA:
Between 1 and 2 million Malaysians may be unemployed this year. Here's why.

LW Melon, on the other hand, got creative and kept her daughter extremely preoccupied during their stay at the hotel and she made sure it felt like home.  Upon arrival, she ensured that her daughter is safe by wiping and sanitizing anything that her daughter could touch.

Unlike Anis, LW Melon did these things to keep her daughter preoccupied: If you did not know, since June 1, Malaysia has announced that every person that returns from abroad must pay for their mandatory 14-day at the quarantine station which was estimated to be RM4,700. But the Senior Minister Datuk Seri Ismail Sabri Yaakob mentioned that Malaysians are only required to pay a maximum of RM2,100 of the hotel room charges which includes the three meals per day.

The remaining costs that are covered includes:

Upon arrival, returnees are required to pay a deposit upfront. Walaowei, what about those who can’t afford to bear this cost la?

Well, as it turns out, not everyone gets to stay at hotels. Students and those who are unable to bear the fees to stay at hotels will be immediately sent to government-owned public training Institutes (ILA) for self-isolation. While waiting for appeals to be approved, they would also have to pay for the Covid-19 tests that are carried out at the International Entry Point (Pintu Masuk Utama – PMA) So, before hitching that next flight to return, you have to make sure that you have enough money to pay for your very first swab test for Covid-19. With the advancement of technology nowadays, they accept card and online bank transfer payment as well. At Jay’s hotel, he mentioned that payment by cash is not encouraged in order to minimise the risk of contact with any of the staff.

Effective from June 26 those who are returning from overseas are required to pay between RM30 to RM150 to be tested for Covid-19 upon entering the country. However, non-Malaysians will have to pay higher fees depending on the type of tests conducted. So, here’s what the total average cost will be:

However, there are also exceptions! Apparently, those who are excluded from the Covid-19 screening fees are:

5. Hotels have wakeup calls every morning to check if you’re alive or not o_O

As mentioned earlier, returnees are served with three meals a day and they are scheduled accordingly. Jay told us that food would be delivered and put on chairs that are placed outside of every room to ensure minimal contact between returnees and hotel staff.

Besides that, according to our interviewees, there will be an announcement on standard health warnings first thing in the morning usually between 7am to 8am depending on the hotel you’re staying at and reminders when the food is ready. Check out how it sounds like from this video here.

And it probably makes you wonder why so early in the morning? Well, in his Facebook post, Jay shared a photo that explains why: And although it may seem like returnees are undergoing quarantine alone…

6. There’s actually a support group for returnees under quarantine!

Meet the Malaysia Quarantine Support Group (MQG)– a Facebook group created by Ed Adeeb and Suzanne Lee to raise awareness to travellers and returning citizens entering Malaysia during the pandemic.

However due to the fluidity of the crisis, changes in SOP by the authorities are inevitable and sometimes cause more confusion and anxiety to those concerned. This is where MQG comes in to ensure relevant information are published in user-friendly manner after every official announcement is made. Unlike other groups, MQG does not posting Government document unless with the owner’s permission or if the information is readily available on owner’s official outlets.

The group, which has attracted over 18,000 members, is filled with both queries and first-hand experiences shared by both Malaysians and foreign nationals. So, if you’re planning to return to Malaysia, you may wanna check out their Facebook page. An infographic on how the cluster started. Img taken from @pelhambluefund Twitter

So if you’re a returnee, you may wanna do your part by adhering to the quarantine ruling set the government. And this is pretty serious because if you were found violating the ruling, under Section 15 of the Prevention and Control of Infectious Diseases Act 1988  (Act 342), you can be convicted:

As for the rest of us, we can do our part by reporting quarantine violators to the authorities. Having said that, let’s take the necessary steps to ease the burdens on our frontliners and help work together to fight the war against Covid-19.