Unless you’ve been living under a rock, the news on SPM this year has been all about one thing: some allegedly controversial questions that appeared in the Pendidikan Moral paper. In this report by Malaysiakini, a student shared that candidates for the paper were asked to answer questions based on a notice and a picture. Here’s what the question looked like:

“The notice states that civil servants are not allowed to participate in anti-government protests; the picture is of two students speaking to each other. Student A is putting up a poster promoting an anti-government rally, saying that he would receive RM100 after he finishes putting up the posters. Student B advises Student A against doing so.

(a) Why students should not participate in anti-government rallies?

(b) How should schools prevent students from participating in anti-government rallies?

(c) We should support Student B’s stance. Why?” – Malaysiakini

As expected in this age of social media, Twitter exploded with (frankly, hilarious) tweets from students faced with these questions. In fact, they got people so riled up that DAP Parliamentary Leader Lim Kit Siang has even called for the paper to be made public so that we can judge for ourselves if they’re actually controversial or not. But actually, it’s not the first time the Moral paper has caused headaches for SPM students.

In 2013, the nation went kecoh after they apparently changed the format of the paper without announcing it to students or teachers beforehand, and there’s been many, many calls to reform the way Moral is taught in general after parents (and Lim Kit Siang again!) complained about seemingly unfair marking schemes that hold non-Muslim students back, or even questions with racist undertones. 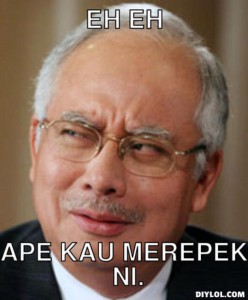 Disclaimer: For this article, we spoke to current and former employees of both Lembaga Peperiksaan and the MOE, as well as Moral teachers in government schools. But since we are quite nice people most of the time and don’t want to get anyone into trouble, we’ll be keeping our sources anonymous.

…To see if these kinds of questions have appeared in the paper before.

UNFORTUNATELY… SPM Moral is a closed paper, so we couldn’t find any. Students have to return every exam paper after they’re done sitting for it, and teachers don’t get copies either, which explains why you never see one of those “Kertas Soalan SPM Sebenar” books for Moral in stores. Nobody at the Lembaga Peperiksaan (Exam Syndicate) or Ministry of Education can confirm or deny when controversy arises, because they aren’t allowed to comment on the content. So instead, we decided to go digging around instead to try and figure out, How did those questions (allegedly) get on the Moral exam paper?

Why is the Moral paper such a big secret in the first place? Idris Jusoh is holding UPSR papers here, but you get the idea. Image from The Malay Mail Online

First of all, you should know that there aren’t many closed papers for SPM at all. In fact, according to this year’s Jadual Waktu Peperiksaan, there are only 3 to be exact: Moral, Visual Arts (Theory) and Sports Science. A bit random right? And of those 3, only Moral is a compulsory, must-pass-in-order-to-pass-SPM paper. So what is it that these 3 subjects have in common?

The short answer: The exam questions are always the same. Seriously.

“Papers are usually closed when the subject matter isn’t extensive. The scope of what you can ask is limited by the curriculum, so questions are often repeated.” – a former high ranking LP employee tells CILISOS.

But that begs the next question: Why is Moral even a subject, much less one that non-Muslim students are required to take and pass?

“This was part of a decision to make Pendidikan Islam compulsory for Muslim students. So they had to have something compulsory for non-Muslims too.” – a former high ranking LP employee tells CILISOS.

Our sources were adamant in the fact that Lembaga Peperiksaan never thought it should be part of the curriculum; that was an order that came from the powers that be at the MOE.

And who comes up with all those “Ali, Muthu, Ah Chong” questions?

Okay, so now that we’ve got the background down, here’s how it begins.

And since national exam papers come under the Official Secrets Act (OMGWTFSPM?!!!), until they make it into the hands of students, they are kept pretty much under lock and key, especially after the leaks that happened last year. (And hey, while we’re at it, here’s a primer we wrote on the OSA!) I mean, if he says so… Image from blackhatworld.com.

With us so far? Sounds good right? But there’s a couple of points to consider.

The subject specialists have no idea if their questions will be selected, and if they are, when they will be used in a paper – not even what year it will be used, if at all. Each SPM paper is assembled two years in advance, to accommodate the huge logistical nightmare of printing and distributing exam booklets for nearly half a million SPM candidates. That means the questions for this year’s SPM Moral paper would have been from 2013 or earlier.

Catch No. 2: Controversial questions can get cikgus in deep poop.

Teachers can get into trouble for setting questions that deal with political, religious or racial subject matter. Even at the school level, our contacts tell us, teachers have been reprimanded or suspended for setting school exam questions that refer to opposition figures or that imply partisanship.

So how on earth did 2015’s controversial questions get in?

The consensus our sources came to was this: IF the question was indeed as partisan as stated by students (and again, it’s IF because we can’t take a look at the paper itself to confirm this):

“This could only have been inserted at the last stage after the paper had been assembled in 2014, or during proofreading, also in 2014 or early 2015. Give you something cute to wash down all this seriousness. Image from quickmeme.com.

We obviously can’t give you a concrete answer for this one. But if we had to guess, we’d say that in Malaysia’s current political climate, where public opposition to the ruling government has become increasingly vocal, perhaps certain parties are trying to send a message as to what consequences await young non-Malays who are about to leave school and may be considering adding their voices to the growing chorus of dissent. We said perhaps.

In any case, when it comes to Moral as a subject, we think it best to leave you with this comment from one of our interviewees: Share this article:
NAH, BACA:
We compare Pakatan's first Budget to the previous decade's budgets, and here's what we found.