Almost as if it was something straight out of another novel by Dan Brown, it was recently reported that some important pieces of history had somehow just DISAPPEARED in Malaysia.

Okay so maybe this doesn’t involve the Deklarasi of Merdeka, but when you think about it, it’s even weirder than Nicholas Cage: Not one, but TWO Dutch World War 2-era shipwrecks have mysteriously vanished on the seabeds of Malaysian waters over the past couple of weeks. And surprisingly, we couldn’t find any mention of it in local media, instead having to depend on international publications to catch wind of it.

Now these weren’t some emergency sampans that Rose selfishly used to save herself – these two warships were over 240 feet in length. How then could two shipwrecks suddenly disappear from the bottom of the sea?!

Well, there does seem to be a reason it.

The historical shipwrecks may have been tragically looted by scavengers The HNKMS K XVII submarine in the foreground, one of the WW2 Dutch shipwrecks that suddenly went poof. Image from Atlas Obscura

The two Dutch shipwrecks were that of two World War 2 era submarines: the HNLMS O 16 and HNLMS K XVII.

These ships were built in the early 1930s, with the K XV11 being the older of the two, while the O 16 was an improvement on its older sibling that was bigger and faster. The Dutch would later send them to become the pride of their submarine fleet patrolling the Dutch East Indies by the late 1930s. The K XV11 was also quite controversial, with a number of conspiracy theories about how it actually saw the Japanese troops heading over to Pearl Harbor. Sadly, both of these submarines were sunk in 1941 by Japanese mines near Pulau Tioman, and these shipwrecks were also the final resting grounds for the 79 men who were onboard.

The disappearance came to light when a group of Dutch and Malaysian expedition members were investigating a possible disturbance in the area surrounding the shipwrecks , and discovered that the pair of almost 80-year old wreckages were no longer there. What’s left was just an outline in the seabed and a few remains of one of the shipwrecks in the ocean. The remains of the 79 crewmen are now missing as well. 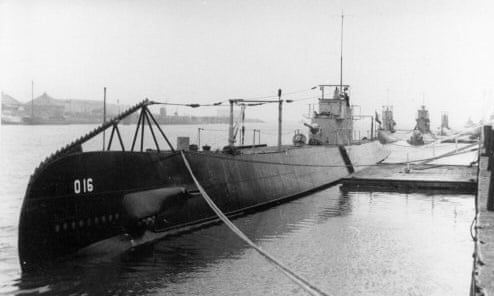 The O 16 submarine in its prime. Image from The Guardian

The prime suspect behind these disappearances? Salvagers, according to Dutch govt officials. And as it turns out, scrap metal salvagers have been hunting down these types of shipwrecks for a number of years now, and it’s become a problem not just for us, but also for countries like Indonesia and Cambodia. At least 40 World War 2-era ships have already been destroyed by these looters, according to a 2017 Guardian report.

One notable incident that made headlines around the world was the 2016 disappearance of three sunken British WW2 ships and a US submarine wreck from the Java Sea bed. The suspected scrap metal looters had salvaged up the metal, and allegedly dumped the remains of the dead WW2 soldiers from the wreckage into mass graves, which caused the UK govt to condemn the ‘unauthorised disturbance of the wreckage’. Even smaller and lesser known shipwrecks like that of the HMS Banka have already been destroyed and salvaged, to the ire of divers in Tioman who used to dive and sightsee around these wrecks.

These looters would look for these WW2 era shipwrecks and begin to quite literally blow them up in the middle of the ocean, breaking down the boat into tiny little pieces of rusty steel. A barge with a crane then proceeds to scoop up all the metal. You can check out this animation from the Guardian on how these salvagers do it below:

GIF from the Guardian

And as for why these guys do it? Well, money duh. These ships have plenty of steel, copper and brass from it, with even the poorest quality steel from these shipwrecks able to fetch about USD1.3 MILLION! One reason why it seems to sell for so much is apparently to feed the booming demand for steel and scrap metal in China. China has in recent years taken over as one of the world leaders in global steelmaking, and with that new role comes a new appetite for scrap metal to recycle into steel. While globally scrap metal use in steel production has dropped, in China, scrap metal use is on the rise.

Meanwhile, another reason why these WW2 era shipwrecks can fetch enough money to pay three generations of your family’s PTPTN debt is that these ships were made with ‘low background steel’. What this means is that they were made before nuclear testing began in the 1940s, and as such the steel in these shipwrecks are free of radiation. Low background steel is highly coveted for their use in super canggih scientific and medical equipment like Geiger counters and space sensors. This might explain why despite there being more modern shipwrecks in the ocean, these aren’t being targeted by the looters as much.

But still, could you imagine if someone went to the cemetery of your loved ones and dug up the graves? You might then perhaps understand why relatives of those who died with the Dutch ships are shocked to hear that a war grave had been destroyed by looters. Also, that instead of ending up in a memorial or a museum, that these historical artifacts will probably be melted down into housing girders or the new iPhone…. this HAS to be illegal right?

NAH, BACA:
Wait. Why are there so few Chinese gangsters in Malaysia these days?

We’re not entirely sure which laws they’re breaking

In domestic laws, from what we’ve found in the National Heritage Act 2005, illegally excavating a heritage object may lead to jailtime of up to five years and/or a fine not exceeding fifty thousand ringgit. But the vagueness of the laws comes into play as to whether these wrecks are considered an ‘underwater cultural heritage’, in which case it’s only an offence if the ‘heritage’ in question is older than 100 years. And seeing as these shipwrecks aren’t, it does become a bit of a grey area. The periscope of the K XVII before it was salvaged away. Image from DiveTioman

HOWEVER, the remains of sunken wartime ships are actually protected under international treaties as the war graves of the soldiers and crewmen onboard who died with the ship. In fact, it seems as tho that regardless of where the shipwreck is, the shipwreck itself actually has sovereign immunity under international law and it is considered the property of the ship’s country of origin. As such, it seems that it’s illegal to destroy these shipwrecks without permission from the country who owns it.

However again, we couldn’t find any one general rule for it, with some legal professors saying that there’s a lack of international law regarding wrecks. Nevertheless, Jet Bussemaker, a Dutch politician whose grandfather was the commander of one of the Dutch ships, said that while it was frustrating, it should not come as a surprise given the history of salvaging in the region.

“It is a very sad message. It is shocking to all the relatives, but at the same time it does not surprise me at all. I am now also just a surviving relative. This is very bad. It gives no rest this way. That boat was the grave,” – Jet Bussemaker, Dutch politician, as quoted by the Guardian

Adding more salt to the wound is the fact that just earlier this year, the Dutch foreign minister Stef Blok had come to Kuala Lumpur to sign an agreement with the Malaysian govt. One of the points discussed was the protection of these Dutch shipwrecks that are considered war graves in our waters. Blok even thanked us for protecting the shipwrecks….. *awkward*

So is there really no more hope for these shipwrecks to be protected?

It’s hard to enforce the law in an ocean so big, but proper legislation would be a good start

The ocean is huge, that’s a given. As such, it’s no surprise that despite the numerous international laws protecting these wartime shipwrecks, scavengers and looters have still managed to destroy and sell off the scrap metal from these wrecks. Indonesia, another country having to deal with looters desecrating WW2 shipwrecks, has argued in the past that they do not have the resources to patrol them when there’s other threats to deal with such as smuggling and illegal fishing.

Some countries whose shipwrecks are in the waters have decided to step up their conservation efforts in the last couple of years. As part of their efforts to protect the war graves at sea, the US have sent a number of delegations to Indonesia in an attempt to protect and conserve their sunken battleships. The British meanwhile have been planning to look after shipwrecks in their waters using tech like radar, sensors and satellites, with a possibility to increase coverage to foreign waters too. Some of the British ships in the region’s waters that have been damaged by scavengers. Image from the Guardian

As for the Dutch, in that aforementioned agreement between Malaysia and the Netherlands, a plan was set in place to have an expedition to investigate shipwreck sites as well as set up a joint management plant to protect these war graves.

For now, it appears as tho these scrap metal looters might not be stopping anytime soon. Only time will tell if the efforts of the countries involved will make a change towards protecting the shipwrecks. In the end, it is perhaps Jet Bussemaker who best points out our lack of care towards these historical oceanic war graves.

“It’s cynical that, while we spent so much time and energy to find the wreck, we are not able to protect it,” – Jet Bussemaker, as quoted by Atlas Obscura