In case you’ve missed the news for the past few days, the tour bus that is Malaysian politics has rolled offroad and down a cliff. Azmin Ali and a bunch of PKR politicians have left their crew, Bersatu have left Pakatan Harapan (PH), and Mahathir had resigned from his post as Prime Minister, effectively removing all the other ministers from their positions. As of the time of writing, Malaysia technically has no government.

With Azmin’s team and Bersatu leaving PH, there is no one party or coalition big enough to form a majority in Parliament, so the next Prime Minister will be one chosen by MPs from possibly differing sides. For now, His Majesty the Agong has appointed Mahathir as interim (temporary) Prime Minister while he sorts things out and interviews all 222 lawmakers on who they want as Malaysia’s next Prime Minister. But besides discontent among the rakyat, there’s also a lot of uncertainty at the moment.

People who took leave for GE14 be like… Gif from GifImage.

Like, what would happen if the drama drags on? How long will we have to go without a government? Will Malaysia deteriorate into a lawless society? While it might be an alien concept to most Malaysians – people panicked during the delay in choosing a Prime Minister after GE14 – not having an elected government for stretches of time isn’t that uncommon in other countries. In fact…

Some countries survived years without a proper elected government

You might think we’re going to start talking about Somalia or something, but nah because a) they actually have a government, and b) there’s no point in comparing the situation in Somalia – or special cases like Iraq – to our situation. What happened in Malaysia was that we had an election, members of the Parliament were elected, but there was (and still is) a tiny hitch in choosing the Prime Minister.

The Prime Ministers of Malaysia are often chosen from the largest winning political party, and before GE14, that would have been UMNO. In GE14 however, instead of one big party having the most elected MPs, Pakatan obtained majority by combining the seats of four of its component parties: DAP, PKR, Bersatu and Amanah. These four parties nominated Mahathir from Bersatu as the Prime Minister, despite PKR and DAP having more seats than Bersatu. It got more fragmented recently. Original img from Wikipedia.

This agreement among the coalition’s parties led to a speedy election of a Prime Minister, but recent events may make it a bit more complicated. While this may be a first for Malaysia, such a situation isn’t exactly uncommon in other countries. An extreme example of this is Belgium with a record of 589 days. Basically, Belgium had a troubled past keeping the two halves of its different-language-speaking communities together, and after one of its Prime Ministers resigned in April 2010, it took some time for the next government to be formed.

An election was held, and candidates from 11 different parties won, with no party having won more than 20% of the total seats. The two parties with the most votes had to agree on a government together, but apparently they kept arguing over all kinds of stuff, and negotiations kept failing. Ages later, they finally drew up an agreement, formed a governing coalition, and finally swore in a new Prime Minister in December 2011.

While Belgium’s case is impressive, Northern Ireland went above and beyond by going three years without a proper government. Northern Ireland has a unique system where they essentially have two Prime Ministers (called First Minister and deputy First Minister, with equal power) from two different political parties. Due to disagreements over power sharing, one of the Prime Ministers resigned in January 2017, and his party refused to pick a replacement, essentially causing the other Prime Minister to lose her job as well. Elections were held, and the previous parties came out on top again, but disagreements between the two parties continued. While there was a deadline for the parties to agree on a government, it kept getting postponed until last January, when two politicians from the two parties were finally appointed as the First Ministers.

NAH, BACA:
How did two WWII shipwrecks just vanish from Pahang waters with no media coverage?

These two are the most notable cases, but there are plenty other cases as well. For example, Spain’s 10 months without a government recently ended last month, and the Netherlands took more than 208 days to form a coalition government in 2017. Regardless of length, having a delay between elections and an actual government seemed to be quite commonplace. Which kind of makes one wonder…

Can Malaysia also survive without a government for that long?

For the countries that we’ve mentioned before, business went on as usual for their people even in the absence of a government. Some have noted that in the case of Spain, their economy picked up, tourists arrived in record numbers, and even unemployment went down during their 10 months without a government. And while other countries aren’t doing that phenomenally, they weren’t exactly on the verge of collapse, either.

How a proletariat reacts to having no government. Gif from Giphy.

Even without a government, the state bureaucracy (read: the civil service) would still be in place, so the people may not immediately notice a difference between having a proper government or not. As put by Dr Román Marugán, a political scientist from Madrid, Spain, their state bureaucracy is designed to keep working no matter what happens, and with such a system already in place,

“All the acting government needs to do is to make sure it puts enough oil in the machine to guarantee it operates effectively,” – Dr Román Marugán, as reported by CSMonitor. 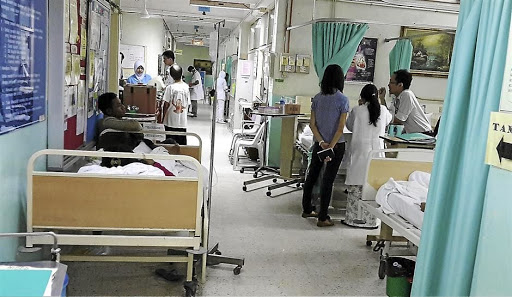 So you can probably break that leg, because government hospitals would still be operational. Img from Malaysian Times.

You can read more on caretaker governments here, but basically without a proper government in place, we might survive for a little while, but we still need a proper government to make major decisions. In Belgium‘s case, they weren’t able to carry out structural reforms and reduce their debt, and that dropped their credit rating from AA+ to AA, which would make it more expensive for them to borrow in the future. This incident is believed to be why their politicians finally agreed to form a proper government.

“A government without power can’t introduce new taxes. On the other hand, a government without full powers can’t take new measures concerning the outlays.” – Herman Matthijs, a professor of politics at the Free University of Brussels, as reported by CNN.

While in Spain’s case the economy seemingly thrived without government intervention, Malaysia, whose economy is still struggling to recover, will probably need a proper government to make the right economic policies and strike deals with other countries and investors. The recent political upheaval had already impacted our stocks and ringgit, and unless something is done to address this soon, we’re in for a bad time. Without a government, who will promote our palm oil? Img from The Star.

One might argue that regardless of who the next Prime Minister is and what kind of Cabinet will get formed, we’re in for a ride. Let’s just hope we get better drivers this time.