There is a general assumption is that Malaysia is not very good at a lot of things, and who could really blame them? With so many controversial scandals flying around, it’s hard for us to be really proud of something. But that’s not always the case.

Our sports team might be ridiculed at times but there are extraordinary individuals that make a name for us. Our film industry might be struggling for a while but every now and then you will see precious gems commanding international attention. But there is one more thing that we can be really proud of, and that is our game industry.

Gaming, one of the biggest industries in the world is only going to grow bigger over the next few years and you might think that we might be slow to the race yet again. If you like games, or thought about making games one day, prepare to have your minds blown.

And after further digging we found out that the very same Malaysian studio made so many other blockbuster titles, like Dark Souls 3, Batman Arkham Knight and Gears of War… games that take years and millions of dollars to make. If you are a fan of Final Fantasy, the lead designer for the latest instalment is… wait for it… Malaysian also! It’s kinda like when Malaysians worked on the Life of Pi, but sepuluh kali ganda man. If you’re not familiar with gaming, just know that all the names mentioned here are super successful games played all around the world.

You see, for us to reach that level of achievement, there needs to be some infrastructure in place. Building an industry is not just about single-tracked talent, opportunities and technology, but all of it combined. Without any of these things, the industry wouldn’t be able to stay as long as it had, let alone prosper.

So how does it look like over here? Well we can break it down to there things:

1. The ‘game education’ in Malaysia is pretty robust

Before this, game development was generally self-taught and people would just make best guesses on how to create a video game. Today, there are plenty of courses teaching almost all aspects of game development and our education system is quite ready for it as major colleges all over Malaysia are offering game development courses.

Lets look at KDU for example. (No we’re not paid to write this.) Offering 3 different streams of design, art and programming, you get to choose what to specialize in from the very beginning. These educational institutes serve as the talent pool of the industry, spawning new game developers every year into the market. And if you’ve been to any of their student showcases, these guys are actually quite ‘terrer’ one. Other colleges like Lim Kok Wing and MMU also offers similar curriculum.

“But wait!” a concerned parent might ask, “What if my kids can’t find a job with these qualifications?”

Don’t worry, these skills are pretty universal. A game artist might be able to transition to a concept artist, an animator or even a graphic designer. A game programmer can always branch out to develop mobile apps or codes for web-based platforms and other software. A game designer is trained to pick up other talents like creative writing or project management, so there is always at least there is always a backup plan la.

2. Outsourcing is where it’s at Much like how American companies outsource their IT call centres to India, Malaysia’s contribution to the gaming industry primarily comes from outsourcing too. We have many outsourcing studios around town, which gives us chances to work on big titles like Street Fighter 5.

Being an outsourcing hub also allowed us to work through the holidays back in 2015 so that one of the most highly anticipated games of 2016, which is Uncharted 4, could be released on time. But other than that, we also have companies like Lemon Sky who produced animation and art assets for games like Call of Duty, Dead Rising 3 and Bloodborne. Even Bandai Namco, a big player in the Japanese gaming industry is setting up an office in KL next month!

So, why are companies outsourcing all these artwork to us anyway? Well, Southeast Asia is getting a lot of attention in making art assets due to our talent pool and relatively cheap production costs. According to the Southeast Asian Game Industry Initiative Report published by MDEC, our high proficiency in English, internet users and ease of doing business due to our very encouraging policies (Top 20 in the world!), is very enticing for foreign investors and they are also drawn to our unique culture, which is quite international with plenty of local flare (and probably good food).

3. There are some pretty successful, full-fledged local studios

If you want to make home grown games, there are options too and you’d be surprised how well some of our game companies are doing. We have some of the earlier ones like Appxplore who made Alien Hive, which achieved 3 million downloads worldwide to date and was featured on the Google Play Store. In fact, the company was acquired by a Singapore firm for quite a massive sum of money.

Then there’s also Mediasoft Entertainment which specialize in Asian sports game, like badminton and sepak takraw which got the attention of Al Jazeera on reviving an ancient Malay Sport on the mobile platform.

If you think games are only for entertainment, dig a little deeper and you’ll be surprised at the other application of games. There is a revolutionary project going on at Sri Emas International School, where they’ve set up a game studio to make the very first chemistry-based RPG (role playing game), built to encourage students to learn chemistry through playing a game.

They got tonnes of press, got funded on Kickstarter for a PC version for $50,000 (that’s RM204,425!) and even got recognized by Google I/O, a developer conference held in the USA! You heard right, even our schools are making games now!

We have all these resources because….

One of the biggest contributing factor is our active community of game makers. IGDA Malaysia have been organizing events and collaborations to encourage more Malaysians to discuss the industry and show off their own work. There are monthly events like the Game Dev Hangout KL where hobbyist, developers or people in general who likes games come together to show their projects, network and share ideas. 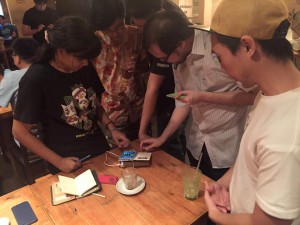 MDEC has also been aggressively pushing the Malaysian industry for years, and the fruits of their labor is slowly starting to show. There are plenty of grants and awards available to encourage people to submit their game ideas and make them a reality. They’ve also partnered with international game awards like the Indie Pitch Arena, where you can have the chance of getting your game funded.

To also increase more exposure to games on a global scale, last year they’ve organized LevelUpKL, a game convention where the best game developers in Southeast Asia are invited along with special guests from massive international companies. MDEC is also helping to bring Mobile Games Asia another convention but this time, specializing in mobile games.

With so many achievements, there is still a long way to go

So close. Image from Giphy

Our success should be celebrated, but that doesn’t mean we should slow down. We are catching up with Singapore, which is another country that is pretty high up on their advancement in game technologies and a few years ahead of us.

In terms of infrastructure, we are very similar with Singapore. The country also had a strong government backing in the name of MDA (Media Development Authority), which ushered in a slew of international companies like Konami (the guys behind Metal Gear Solid), Ubisoft (of Assassin’s Creed fame) and Tecmo Koei (makers of the Dynasty Warrior games) all the way back in 2008.

The MDA also spearheaded the Game Solution Center (GSC) to provide a rapid prototyping development environment for Singapore-based small-medium games enterprises to develop their games. Games from Singapore also have been reaching international success all the way back in 2011, with Ratloop Asia having released Rocketbirds: Hardboiled Chicken on the PlayStation network, a huge achievement for Southeast Asia. Singapore has also been considered a hub for Southeast Asian game industry for a while having a very successful annual conventions in the form of Casual Connect, and Game Start Asia.

But Malaysia has all the right ingredients for a stable industry, and we are just probably a few years away from having a avalanche success story. A few years back, the infamous Flappy Bird made by this one dude in Vietnam got over 5 million downloads on the App Stores and took home a sweet salary of $50,000 A DAY! OMGWTFBBQ. While not everyday is a Sunday for most game developers, it just shows that the ceiling for game is super high.

Things are looking up in Malaysia and while slowly, we are getting there. Just last month a brand new startup in Malaysia snagged an award at Casual Connect and scored the IPCC grant of RM50,000. Shawn Beck started a new company with his buddy JT to form Weyrdworks Studio and their first game Super SteamPuff got featured on Touch Arcade, one of the biggest mobile game site in the world. Even Ace Edventure have plans to extend their series of educational games into other science curriculum and lead a franchise of educational games to schools around the world. So if you want to make games, you don’t need to look elsewhere anymore because the grass just might be greener over here.