Remember last year when CILISOS and a bunch of KL-ites built a home for the Orang Asli? The project by EPIC Homes which stands for Extraordinary People Impacting Community started out with a bunch of friends who just wanted to do something to help the community. They met a person who was helping an OA village, who connected them together, then they built a relationship with the OA and so social enterprise EPIC was born. EPIC went off successfully but after some time in the business, Founder John-Son Oei noticed something NGOs really lacked.

“We’ve been focused on just solving problems…moving from negative to point zero. Why is it that big companies and corporations are the ones that have great visions while us NGOs are only focused on solving problems? I believe that how we move is by shifting from solving problems to chasing a vision.” – EPIC Founder, John-Son Oei told CILISOS

So they wanted to go bigger, something so ambitious that it could mobilise everyone in Malaysia and the world who want to do something good! It starts by activating ordinary people on the street to be aware of the concerns that surrounds them – it could anything, a clogged drain, a homeless man around the corner, someone struggling with his business, potholes to fix, plants to water, etc.

But see what happens when a few people grow to become a hundred people, then a 1,000 strong, and it keeps growing. Imagine the kind of impact that would make! So they created Sedunia, a sort of matchmaking platform for a community of people who want to help (this description doesn’t do it justice but we’ll get there). Coz saving the world alone is no fun. Here are 5 intriguing things about Sedunia:

1. Start by improving your neighbourhood. And then save the world! Impact Maps shows the areas that have been impacted

When the drain outside your taman is clogged or a stray has been abandoned, who you gonna call? Town council! But rather than just talking about the issues, we can fix it. Basically, John-Son and his team wanted to enable people to start their very own version EPIC…or SPCA or Amnesty International or Teach for Malaysia, whatever cause you feel strongly about.

Sedunia has what they call an Impact Map, which shows areas where people have made a difference. Each volunteer and NGO on the platform gets their own personal Impact Map showing where they’ve completed an activity, or ‘mission’ as it is called on Sedunia.

“So we’re hoping this becomes like your passport. Anywhere in the world you want to make an impact, people know who you are.” – John-Son

Anyone who visits the site would be able to follow a mission’s progress. By clicking on a pin on the homepage’s Impact Map…for example, Kampung Sungai Lalang in Semenyih, you can have a general overview of the impact that has been done in that area (whether upcoming, in progress or completed).

People looking for volunteers can follow your personal Impact Map to get to know you better and vice versa. With this Impact Map feature, you would be able to follow what’s happening within your vicinity or far far away, so today improve your neighbourhood, tomorrow save the world! 😀

2. Power up your character stats like in a real life RPG 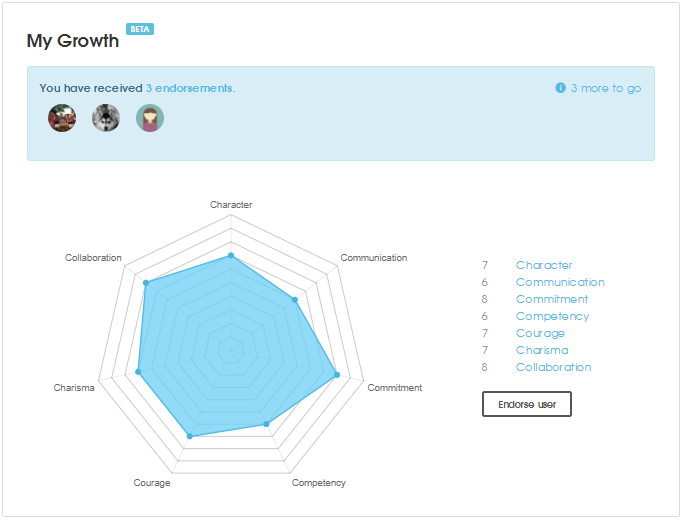 When you create a profile on Sedunia it is like having your very own RPG character. Once you’ve completed a mission, you grow on these 7 points: Character, Communication, Commitment, Competency, Courage, Charisma, Collaboration. These characteristics are your personal growth track that organisers can endorse you for. Game character stats (not from Sedunia). Image from steamcommunity.com

So for instance, you volunteer with Kechara to feed homeless people in KL and carry out your tasks with dedication, Kechara can endorse you for Commitment. If you come up with useful ideas and do your job very capably, Kechara can also give endorse you for Competency. The more missions you help out in, the more endorsements your get from organisations, just upping their stats when you game. You can follow other volunteers or organisations, sorta like adding friends or following pages on Facebook.

The My Growth feature allows organisations to understand where your strength lies in order for them to delegate tasks more effectively to a team. Or it could also help the you see what you’re good at and where you can improve. At the same time, if you FFK (absent) often it will reflect poorly on your profiles. If you’re not sure where to begin, try Sedunia’s Mission page. Anyone can start a Mission, even individuals

As John-Son told us, Sedunia’s purpose is to activate ordinary people on the street, so anyone can start Missions, even your mom. Remember this biker gang who actually did something about it instead of complaining about the problem? Activated!

NAH, BACA:
What kinda business can a woman start in KL for RM2000?

Whether it’s world hunger or a Klang River cleanup, the important thing Sedunia wants to emphasize is making the lives of the community near you better… take action and not just complain that the gomen not doing work.

Currently nine NGOs have signed up to be on Sedunia: EPIC, Kechara Soup Kitchen, Votelah, Global Peace Foundation, Street Feeders, Team Selangor, IMARET, and PJ Kita… and Sedunia plans to bring in international NGOs as well, so volunteers are spoilt for choice. Users can filter their search if there is a particular organisation or cause they would like to work with, otherwise they can click ‘view all missions’. Beats having to call up NGOs one by one to ask what’s going.

4. Did we mention you can unlock the coolest achievements?

Now about the premium features we talked about earlier, volunteers can earn Skill Badges which are awarded for specific skills, such as brick laying, steel construction, or first aid, for example. Yayyy, achievement unlocked! 😀 But as for the roles you undertake on missions, you earn Rank Badges, for instance, doctor, master builder, clinic assistant, and more.

The purpose of having these badges (besides them being fun to collect lol) is so organisers can recruit people with the right skills for their missions. If they wanted to build a wall and they needed 50 volunteers, they could filter search profiles with the brick laying Skill Badge and voila.

“At the moment we will give a premium to organisations, where we can help work out with them how they want to use the badges and design it for them, then allow them to give it out to volunteers.” – John-Son

And the design or creativity of these badges is really up to an organisation’s imagination, like maybe Teaching Towkay for trainers, Poo Poo Polis for animal NGO cage cleaners, Sejarah Sifu for History teachers, Denggi Destroyer for gotong royong members.

5. Mission organisers can use it to run their whole show “One of the problems NGOs face is usually one man does a lot of different things. They wear multiple hats because of budget constraints. So one of the areas that suffers is administration. Usually you have people on WhatsApp, email, or calling you. It takes up a lot of time and energy.” – John-Son

So Sedunia is like a personal assistant for NGOs and organisations. Rather than having multiple excel sheets and Google docs all over the place or omg folders, Sedunia works as a master database where organisers can store all their volunteer forms (eg. dietary preferences, recent injuries, allergies, waiver forms and so on). Even cooler, they can filter through volunteers according to those categories.

Organisers can also set up template emails to blast out to volunteers. The platform uses MOLpay as a payment portal where customers can choose to pay from either Maybank2u, CIMB Clicks, etc. but payments can also be made at any 7-11 store. Upon completing missions, organisers can create Mission Reports to show what has been accomplished (number of lives touched, total funds raised, photos, for example) and this can be downloaded. Volunteers can likewise rate and review missions.

Not only that, the platform has useful plugins that organisers can paste into their own websites and Facebook plugin for comments, which can also act an FAQ section.

Plugin which organisations can paste into their own website

Isn’t that great? It’s really a convenient, end-to-end platform for mission organiser to tighten up operations.

Seriously, the potential for achieving a vision in Malaysia and around the world is endless with a site like Sedunia. It paves the way for discussion, collaboration, and ultimately…our favourite word…action.

“This is also the reason why we started EPIC, we wanted to find ways to get people involved in these sort of things. Why do we have to always blame management, blame government, blame this and that when we have problems. We can do it ourselves. Sedunia is here to channel it in a way that’s strategic and help people find experts who can help.” – John-Son

Excuse us if we sounds cliche, but truthfully, a single organisation or individual can only do so much. The fact that you’re doing things with others, you form bonds and create relationships that can carry from one NGO to another.

“You’re not the only NGO there, but you might not know who else is working there. So the Communities function captures different geographical locations and allows people to collaborate. It’s pretty much like a depository of information or a portfolio of that particular area.” – John-Son