Few weekends back, my friend Sarah* and I had brunch in Bangsar. I called for the bill, saw that it was RM82.35, and gave a RM100 bill to the waitress. She returns with my balance, bill book closed on my table, and I turn to my friend and said, “I bet she shortchanged me of 5 sen.”

“No la where got?” Sarah replies.

So I called the waitress back and asked her politely, “Hi, Miss, it’s written here that my balance is RM17.65, but my 5 sen’s missing.”

“Yes, and I just wanna know, why didn’t you give it to me?” I replied, genuinely curious.

She ignored my question, and, instead of going back to the cashier to retrieve a coin or speak to a manager, she puts her hand into her apron, took out a 10 sen coin and placed it on my table. Then she hurried off, avoiding my eyes.

“Walao!” Sarah said. “She really shortchange you ah! How did you even know?”

At this point, I wanna sound cocky also cannot. Cocky for being shortchanged all the time AND verbally wrestling my 5 sen out of a waitress’ apron? Damn loser.

But in all seriousness, how did I even know? That’s because I’ve been shortchanged of my 5 sen more often than I’d like, so it’s kinda like my 6th sen-se. Air-cond kopitiams, hipster cafes, big restaurants, steamboat houses, fast food restaurants, sushi kiosks… All I dah kena. And as it turns out, many of my friends have encountered the same problem too. The same excuse is recycled, month after month, businesses to businesses: they don’t have 5 sen coins.

Well you know what’s enough? This ridiculousness! And so, we set on a mission to find out what’s up with this trend.

When did businesses start shortchanging us?

As we recall, it was after the gomen stopped using 1 sen and started rounding everything to the nearest 5 sen when businesses started saying, “sorry la miss no 5 sen”. Over time, that recycled line stopped being recycled and waiters would return balances without saying anything, ‘assuming’ you never wanted the 5 sen anyway. Cause technically, where got people so kiamsiap wanna demand their worthless 5 sen back?

Well then, technically, the 5 sen is rightfully the customer’s money and not the restaurant’s… And it is up to the customer’s discretion to burn it or not.

Some people do feel annoyed at the act… … whereas some actually get annoyed for those who do speak out, like in this LowYat Forum thread by a guy who posted up his experience of being shortchanged. So do we speak up or do we ignore it? Is it justified for us to be irked by this habit, or…

… are we just kiamsiap for wanting our 5 sen back?

To each their own, but it’s partly because customers tak kisah (or pressured-untuk-tak-kisah-cos-scared-people-judge) that allows businesses to cultivate this habit. In a way, they’re taking advantage of their customers’ emotions, absorbing these little coins for whatever reason it may be.

Plus, is it even legal to do that? CILISOS spoke to representatives at the Federation of Malaysian Consumers Association (FOMCA) and the Ministry of Domestic Trade, Co-Operatives and Consumerism (KPDNKK), who both said that this practice is actually illegal and that patrons can lodge a complaint against these restaurants if they wanted. (Protip: If you’re gonna make a complaint, call KPDNKK with deets on your 5Ws and 1H.)

Illegal you say? We unlawyered bunch put our Googling skillz to the test but came back empty-handed. It wasn’t stated in the consumer law or the food act, so where could it be?

Daniel Goh, a legal counsel and friend of mine, explained that the issue comes down to basic contract law, which was why we found jack looking at all the wrong places. He explains that if change – regardless of how little it is – was supposed to be returned to a customer and un-complied by the restaurant, the customer has the right to demand it.

“Is it illegal for the restaurant to not give you the 5 sen? Yes. It’s payment due to you, but it’s up to the customer to be aware.” – Daniel Goh, legal counsel

So why do they still wanna keep our 5 sen? 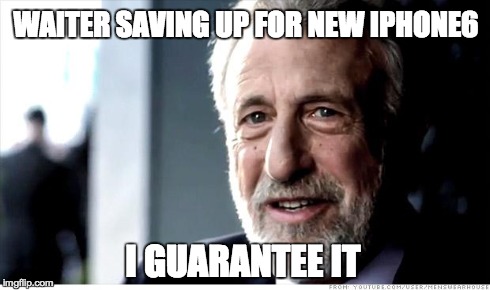 Our instincts tell us that it’s all in the name of cheap, dirty, dishonest profit, but then we did some lame math and… So we spoke to Adam*, co-owner to a group of restaurants around PJ and KL, who gave us an insight into what goes on at the other side of the table. Real meh this “not enough 5 sen” story? How come so many restaurants doing this? It’s feels so dishonest, why you guys treat your customers liddat?

“This 5 sen thing is very troublesome la I tell you. I don’t even know who to blame, why don’t you tell me who to blame. To change RM400 worth of 5 sens, I’ve gotta pay an extra RM10 or RM20 as service charge to the bank. I have so many restaurants under my care, you know how hard to change this much money to be distributed to all of them?” – Adam*, co-owner of group of restaurants

Apparently, it’s super legit when restaurants tell you that they “don’t have 5 sen”. According to Adam, the problem lies with the banks and what seems to be insufficient 5 sen coins going around town. He adds that they’re harder to come by than 10 sen or 20 sen coins, although he’s not sure why. Plus, patrons are always handing full notes of RM10, RM20, RM50 and RM100 so it puts them at a disadvantage. Case in point, this. Sorry, Mart we used to take example photo.

Another friend of mine, who owns a hawker stall business in one of the country’s leading hypermarket food courts, vouched for it. “It’s not just about banks and their service charges… It’s not easy to find bank outlets with notes-to-coin services. Sometimes you gotta make friends with the banks with this service, so that they’ll prioritise you and not other business owners looking to get coins,” he explained.

Aight, let’s just do another super general math right now. Take for example Bangsar Baru – there are about 4 commercial banks and over 100 restaurants around it. Which means, there’s about 1 bank to 25 restaurants, and even with that, one wouldn’t be sure if said banks would provide coin changing services. Pretty inconvenient, we’d have to admit.

And since both guys pointed at the banks, to the bank we went. 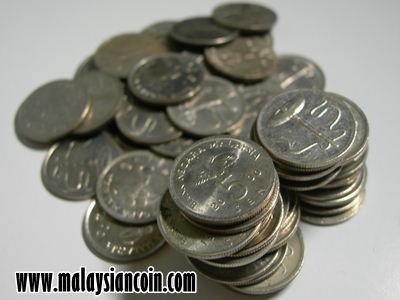 WS Neo, a manager in a local bank, tells us that the service charges were required as the pre-packed coins come straight from Bank Negara and not from bank outlets themselves. When asked why there isn’t enough 5 sen to go around, he simply said this: “You think our money very big now ah? Did you know that one 5 sen coin takes more than 5 sen to produce?” Err, ok, thanks and sorry.

So, the bank guy points his finger at… The declining state of the Malaysian economy…? Sheesh. Who knew such a tiny problem could have such a huge problem behind it? That’s a bigger story for another day.

But are there businesses that have better approaches to this problem?

Yes. There definitely are. Restaurants and, sometimes stores, realise that they’re put in a position of this kind, and actually give an additional 5 sen (rounding it up to 10 sen) to the customer without even asking them. Adam’s restaurants are a few of ’em, and so is 99 Speedmart and Giant. But these are just a few of the ones we personally know, we’re pretty sure there are many others. 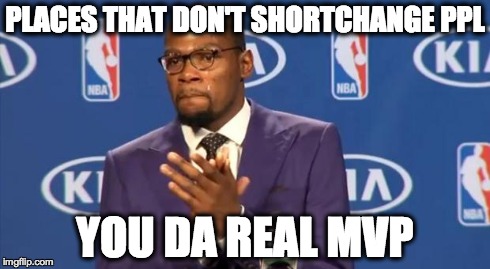 And we respect you for that.

But this begs the concern – how do the cashiers justify the irregularity in accounts at the end of the day?

“It’s difficult if you’re a cashier in a traditional restaurant, where only one person handles the cash register,” Adam tells us. “Imagine asking the same person to pay RM1.00 a day to make up for ‘discrepancies’, and to repeat that everyday… That’s horrible.” He adds that his cash registers are handled by several staff therefore it’s a matter of trust. Don’t hire the wrong person, we’re guessing.

Here are some other practices business owners can try, if they haven’t already:

1. Preempt the customer if you don’t have 5 sen
Tell them and ask (not suka-suka assume!) if they’d be okay with being shortchanged. Ask before they pay, ask before they order, whenever, just ask. Chances of the customer insisting on getting their 5 sen back would be 50-50, but it’s always better to be transparent than to be thought of as a dishonest jerk. Also, really important, train your staff so they realise how strongly their treatment reflects on your business.

2. Shortchange yo’self and give the customer the extra 5 sen
Yes, we know that this isn’t a popular opinion. Technically this eats into the restaurant’s budget, but hey, like we said earlier, the earnings of 5 sen/bill wouldn’t add up to much. Plus, if the amount does affect the restaurant’s business, then uhhh we suggest looking into a different business.

3. Return the balance to the customer in the form of credit
This clever solution (heads up, the article’s in Spanish and we first found it on this travel site) by a Chinese restaurant kills two birds with one stone – customers don’t feel cheated, customers also become returning patrons. And even if a credit of 5 sen doesn’t justify the cost of producingloyalty cards, may we suggest transferring all coins into said card as credits?

And if all those don’t do jack? Well…

4. Replace the 5 sen with a sweet
Not only is this solution a logical one, it’s so sweet that people might remember the business for it. Some restaurants (very few) substitute their 5 sen with a sweet (most times minty ones), and given the cost of buying them in bulk, businesses may even save a teeny tiny bit of money. The idea’s not just cute, it’s practical too. Makan already, mouth smell like garlic, perfect time for a mint. Woohoo! 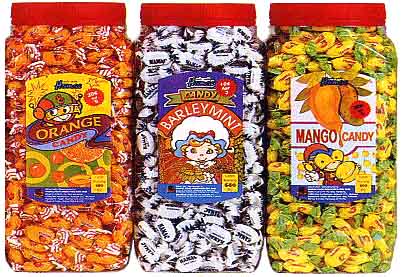 Giving out sweets can be… Well… Sweet 🙂 Photo from MYC

Well, considering that this problem stems from a big issue (read: coin circulation and banks), a long term solution would be to produce more 5 sen coins or simply rounding everything up to a nice 10 sen.

Cheating, regardless of how tiny the amount, leaves a bad taste in anyone’s mouths. Adam, the restaurant owner we talked about earlier on, believes in one resounding principle:

“It’s better for my customer to gain 5 sen than for me to lose a customer.”

*Names have been changed upon interviewees’ request