Many of ugaiz might not be old enough to remember this, but back when Dr Mahathir still had colour in his hair, something happened in Malaysia that caused a huge uproar in the Western community at the time, calling us things like ‘uncivilised’, ‘primitive’, and ‘backward’. Ouch, that hurts, guys. In fact, they were so cheesed off that they actually made a movie about it! ‘Dadah Is Death’: made by angmohs, set in Malaysia. Image from: imdb

Yep, that’s actually the title. Shot in Malaysia, it featured Hollywood A-listers Hugo Weaving (Lord of the Rings, Captain America) and Sarah Jessica Parker (Sex and the City) before they were even famous! It even has Victor Banerjee playing a young Karpal Singh (since the late Karpal Singh represented Barlow in real life)! Screencap from the movie ‘Dadah Is Death’. Screencap from the movie ‘Dadah Is Death’.

As for the movie itself, the acting is decent and the setting feels authentic but there are some parts here and there that are just mega-cringey. The courtroom scenes for instance, have ‘Malaysian’ judges, prosecutors, witnesses and lawyers who all speak in British accents!

Wawawah what was the movie about la?

The movie is based on a certain case that happened back in 1983 when Malaysia amended its Dangerous Drugs Act and made the death penalty mandatory for drug traffickers. A ‘war on drugs’ had been declared and the gomen was coming down hard on drug smugglers.

It was unlucky, then, for two Australians who decided to do just that. On the 9th of November of that same year, Kevin Barlow and Brian Geoffrey Chambers were arrested with 179 grams of heroin and became the first Westerners to be executed for drugs in Malaysia.

Since there was no precedent for these circumstances, the pair agreed to not get their families involved because they believed they could rasuah their way out. However, eventually their families did get involved. Barlow’s mother, Barbara Barlow, became a sort of a mini-celebrity by aggressively campaigning for her son’s release, even after the sentence was passed. She actually wrote to the Pope, Margaret Thatcher, Queen Elizabeth II, Australia’s foreign minister, and the UN (but only got a reply from the Queen)! Pudu Prison, where the pair were executed. Image from: Wikimedia.

The Aussie community was understandably up in arms at seeing two of their own being treated this way, considering their history as a penal colony and the ‘right to life‘ which essentially defines their human rights policy. It is also in fact, the reason they haven’t sent Sirul back to Malaysia, because they do not extradite to countries with the death penalty.

So how ugly did things get?

Pretty ugly, as things turned out. Although many Australians sympathized with Barlow and Chambers, there were some who felt they deserved their fate:

”My daughter died of a heroin overdose last year. Why should my daughter die and your son live? I’d pull the switch myself!” – Random woman to Barbara at a fundraiser

”I got letters accusing me of being the breeder of murderers; it was quite a horrifying time!” – Barbara Barlow

The issue also irrevocably damaged Malaysia-Australia relations for the length of Dr. Mahathir’s first tenure as Malaysian PM. When the then-Australian PM Bob Hawke criticised Dr. M and Malaysia, calling the executions ‘barbaric’, Dr. M responded with one of his trademark one-liners:

“That’s what you should tell the drug traffickers!” – Dr. Mahathir 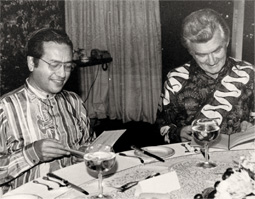 Dr. M and Bob Hawke at a reception dinner in 1984, before the executions. Image from: Australian Gov Dept of Foreign Affairs and Trade

Despite all the drama surrounding the case, three years and two appeals after Barlow and Chambers were arrested, Malaysia upheld the decision and hanged the two men in 1986. Barlow’s last words to his legal counsel Karpal Singh were:

“You have tried your best. That’s the end.” – Kevin Barlow Karpal Singh as portrayed by Victor Banerjee in ‘Dadah Is Death’. Screencapped from the movie. The real Karpal Singh. Image from: The Malaysian Times

Fast forward to 2018, and it seems that Dr. M may have changed his mind…

Despite being the one who introduced the death penalty for drug trafficking in the first place, Dr. M recently seems to have had second thoughts, especially since the case of Muhammad Lukman, who was sentenced to death for providing medicinal marijuana products to the public:

“No, I think we should review that.” – Dr. M when asked about Lukman’s case In fact, the gomen is currently in talks to make us the first country to legalise medicinal marijuana! This move could potentially impact local pharmaceutical stocks, but more importantly foreign policy as well, as this could result in us reviewing past cases where foreign nationals have been sentenced for drugs.

So, is Dadah still Death here?

We’ve already spoken at length about this in a previous article, but long story short, there are pros and cons to the whole issue of legalisation. Also, while Malaysia is discussing the legalisation of marijuana here, do keep in mind that it’s specifically for medical use only, and not recreational. So don’t get excited and start lighting up joints in public yeah?

In any case, while we’re all for freedom of expression and all that, here’s to hoping that if the angmohs make another movie about us, it portrays us in a good light instead of as an ‘uncivilised, primitive, and backward’ country that likes hanging people. Haizzz…

If you’re really curious to see it, you can watch it here (but just try not to cringe too much):