Malaysia, like many other countries, used to be a colony of the UK – and it was called Malaya. And we know that Tunku Abdul Rahman played a pivotal role in securing Malaysia’s independence to give our ancestors and then the rest of us a proper nationality.

However, when Queen Elizabeth II and her government were in the process of decolonizing its territories around the world, Tunku Abdul Rahman was not the only one fighting for independence of this country. There was also the Malayan Communist Party (MCP) who fought against Japanese occupation from 1941 to 1945.

And then there was this man: Ibrahim Yaakob. 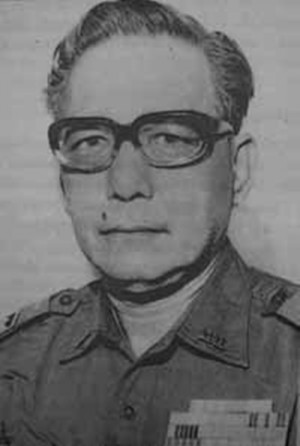 In case you didn’t know, Ibrahim was one of the original freedom fighters who fought for Malaysian independence… to achieve a Melayu Raya. Or simply put, a unification with Indonesia.

He had the idea of bringing together the Malays

Melayu Raya has had many names, such as Greater Indonesia or Indonesia Raya – depending on who you ask. Basically, it is a political concept that unites the Malay race in Southeast Asia, mainly Indonesia, Malaya, and Borneo Island, to make up a Malay archipelago. This concept came about within Malaya when Indonesia reached its nationalism peak, with then-Indonesian president Sukarno advocating for an ideal independent Malay nation in the 1930s. And Ibrahim Yaakob was one of the few who’d listen to him.

Inspired by Sukarno’s concept of nationalism, Ibrahim later formed Malaya’s first national political establishment, Kesatuan Melayu Muda (KMM) in 1938, with a group of SITC students and graduates. Coincidentally enough, SITC was also dubbed the birthplace of Malay nationalism. KMM’s Melayu Raya was for all Malays to recognize themselves as one race, speaking one language, and having one nation. And according to late historian Khoo Kay Kim, a large number of KMM members were allegedly Indonesians. They followed Sukarno’s policy of not cooperating with the colonizers, while Ibrahim and other KMM members began staging propaganda attacks on the British administration and the local cooperators, most of whom were English-educated Malay bureaucrats and aristocrats.

The anti-British activities eventually attracted the attention and approval of Japanese agents who were already in Malaya. It was around this time when Ibrahim apparently encouraged cooperation with Japanese authorities, hoping to attain Japanese support to get rid of the British forces. And for that, Ibrahim and several other KMM leaders were arrested by the British when World War II eventually erupted.

But then British Malaya eventually fell to Japan, who released Ibrahim and his cohorts. However, when KMM started demanding for Malayan independence, KMM was instead disbanded on the grounds of radicalism by the Japanese.

And so, the Melayu Raya dream died out with it… for the time being.

But then the Japanese armies started weakening :/ Ibrahim did not exactly sit on their hands after KMM’s disbandment. In fact, they joined Japanese military units in Malaya, and Ibrahim himself was even appointed as an adviser on Malay affairs within the administration. When the Japanese were considering granting Indonesia its independence together with Malaya, to achieve Melayu Raya, Ibrahim was brought back into the discussion of independence. Thus Kekuatan Rakyat Istimewa Semenanjung (KRIS), or Special Strength of the People, was born. The historic meeting in Perak. Screenshot from The Japanese Occupation of Malaya

As a result of the Japanese’s plans for the region’s independence, Ibrahim would meet the Melayu Raya man himself: Sukarno.

NAH, BACA:
4 reasons why taking in the Rohingya refugees is good for M'sia

They apparently met in Perak to discuss the unification, with the Japanese military present. The meeting was part of the efforts to take over the government before the UK’s return to rule Malaya once again.

“Let us form one single Motherland for all the sons of Indonesia.” – Sukarno, as quoted by M Ito

Sukarno called for the inclusion of Malaya within the territory of Indonesia because he believed:

However, the plan barely got off the ground due to the abrupt surrender of the Japanese forces. Following the surrender, Indonesia also suddenly announced its independence without including Malaya, essentially crushing Ibrahim’s dreams. So Ibrahim fled to Jakarta and never returned to Malaya, and KRIS fell with his departure, marking the end of Ibrahim Yaacob’s Melayu Raya dream.

Others would continue the Melayu Raya fight without Ibrahim

Still very much inspired by Indonesian principles and seeking unification with our neighbor, members of the defunct KMM and KRIS went on to build PKMM on the same day as Indonesia announcing its independence.

But without Ibrahim at the helm, a new batch of Malay leaders would carry on the fight. Meet Mokhtaruddin bin Lasso and Burhanuddin al-Helmy, both of whom were former KRIS members and had decided to take reins of the Melayu Raya struggle by establishing PKMM.

For a time, PKMM was even a part of the United Malays Nationalist Organization (UMNO), but soon departed due to ideological and personal differences. PKMM gained influence as Malay youths enthusiastically joined the cause, and the party’s presence could destabilise the British colonial powers and UMNO at the time. In addition, UMNO was supposedly wary of the idea of joining with Indonesia due to ideological differences. They suspected that Melayu Raya was less about equal status, but more about Indonesia expanding its reach.

These elements seemed to factor into the backing of UMNO by British colonial powers, allowing it to have more influence over all and toppling PKMM in the end.

British forces also allegedly took advantage of the Malayan emergency that was sparked by worsening racial conflicts to get rid of all left-leaning parties and individuals within the territory. As a result of the crackdown, Burhanuddin and many other PKMM leaders ended up getting arrested by the British.

Hence, with their arrests and the overarching influence of UMNO, the idea of Melayu Raya in Malaya also faded out. For real this time.

And so…Melayu Raya ended up a failed dream Sukarno never did give up on the idea of a Melayu Raya, despite having declared Indonesian independence without Malaya. When the Tunku came up with the idea for Malaysia, Sukarno was one of the most vocal protesters of the plan, so much so that he declared a confrontation against Malaysia in 1963.

But then the Indonesian Communist Party (PKI) staged a coup against Sukarno on the 30th of September, 1965, causing him to fall from power and allowing General Suharto, who survived the coup, to take over in 1966. Following that, Sukarno was stripped of all powers and put under house arrest until his death. Suharto and Mahathir. Image from Brilio

Unlike Sukarno, Suharto did not oppose to the formation of Malaysia and instead had a close relationship with Malaysia, where even Prime Minister Dr Mahathir Mohamad said he was like a big brother to him. There is even a Federal Land Development Authority (Felda) settlement named after Suharto in Hulu Selangor.

With the fall of Sukarno and the rise of Suharto, the idea of Melayu Raya ceased to exist. Nevertheless, Ibrahim Yaakob and the fight for an independent nation of Malaya with Indonesia remains an important part of the a long Malaysian history.